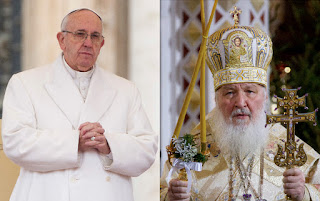 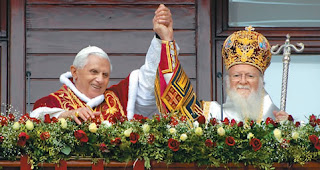 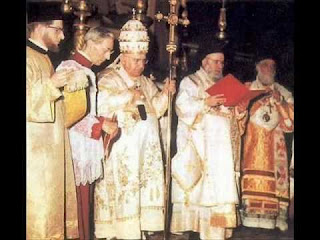 Crux (and you can read the entire article HERE) is reporting the important role of Pope Benedict XVI in arranging the meeting with Patriarch Kirill!

Here is the important passage:

Archbishop Georg Gänswein, the personal secretary of emeritus Pope Benedict XVI, told reporters on Friday that the retired pontiff was informed of the upcoming meeting, saying Benedict called it a “historic encounter, a historic step.”

Gänswein said Benedict and Kirill know each other well from when the future pope was still the Vatican’s top doctrinal official, and the Russian Orthodox cleric was a metropolitan. According to Gänswein, one of Benedict’s first meetings after his election to the papacy was with Kirill at the Domus Santa Marta, the hotel where Francis now lives.

Benedict helped lay the groundwork for the upcoming meeting, Gänswein said, adding that by adding new “columns” and “pillars,” Francis has helped “build the house.”

Here is some important background information that you won't likely hear from the Orthodox themselves:

Both St. John Paul II and emeritus Pope Benedict XVI tried holding this meeting in Moscow, but it never came to be. One obstacle was the belief by Russian religious leaders that the Catholic Church was trying to convert Orthodox faithful in what Orthodox leaders considered their territory.

Yet a study in 2002 found there were just 800 conversions in the entire decade of the 1990s. Meanwhile, Evangelical and Pentecostal Christianity exploded in Russia, so much so that a 2012 book referred to it as a “post-Soviet gold rush.”

In the 2000s, in another sign of appeasement, the Vatican imposed an informal “no-growth” policy, instructing pastors to tell any Russian who wanted to become Catholic to go back to their Orthodox parish.

Far from expanding, Catholicism shrunk, in part because many ethnic Germans and Poles left Russia.

The Russian Orthodox have also consistently vetoed a papal trip to the country, making Moscow one of just a handful of places, including Beijing and Pyongyang, where the pope is not welcome.
Posted by Fr. Allan J. McDonald at Friday, February 05, 2016

Patriarch Kirill looks more like a pope should look like, kinda funny but that is what we currently have in the Vatican.