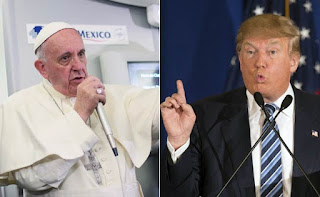 On Saturday (yesterday, as I write) I received a call on my office voicemail from an irate southern fundamentalist pastor. He gave his name and I believe it was his name, Bobby Jones. Before I tell you what the message said, the name if funny from two points of view. Bobby Jones is the famous golfer whose name is on a major expressway in Augusta and he of course is legend for helping to found the Augusta National Country Club and Golf Course home of the Masters.

However across the river from Augusta in South Carolina is another famous Bobby Jones who founded a very anti-Catholic, somewhat racist university in Greenville, South Carolina, Bobby Jones University. Oddly enough, although it is a fundamentalist Baptist University, it have the largest collection of religious art (mostly Catholic) in the USA!

Well, anyway, the Bobby Jones that left me a voice mail yesterday was irate about Pope Francis and his immigration policies and trying to influence American politics and our presidential election.

Speaking with a very, very, south Georgia southern accent, but crystal clear in diction as any good southern fundamentalist preacher would be, he berated the pope and told me to tell him to stay out of our politics. One of his questions was and you have to read this but in your mind add the thick southern accent:

"Why did he go back to the Vatican in that huge Italian jet empty. Why didn't he load up that jet and bring back with him all the refugees who want to come to the USA and take them to the Vatican."

But yes, in South Carolina, there is a significant evangelical, fundamentalist population that is very anti-Catholic and anti-pope. When Pope Saint John Paul II visited South Carolina (Columbia) in 1988 there were billboards decrying his visit and calling him the AntiChrist.

So this was a spite vote then because they didn't like his condemnation of Trump? Guess then Pope Francis should stay out of politics. Heaven forbid Trump gets in because of that, despite how much he will aggravate Trudeau 2.0 and his addled friend Kathleen Wynne here in Canada/Ontario.

The Holy Father may have been unwise to make comments when names, important ones, were being flung about. But he did point out the truth that a Christian is bridge builder, not a builder of walls that creates divisions.
The problem is that the news media are vipers of disinformation, and used the Holy Father's remarks to create further (ideological) divisions in the population. The media today controls the minds of the population, reminding me of what Malcolm Muggeridge once said about the TV as being the work of the devil.
Personally, there is a long way from South Carolina to the White House, and right now Mr. Trump is a lightening rod for a lot of the frustration of Americans over the economy and politics in general.

Look, there is no big "secret" as to why Donald Trump is winning and very popular with the majority of Americans and will be the next President of The United States. The American people cannot take it anymore, enough of Bush, Clinton, Obama, and all the others the times and issues have changed for the worse and it is now showing in how we are going to vote. Yes he was married 3 times well ok, he was pro-abortion at one time well ok, he cusses all the time well ok, BUT he will build a wall, he calls out Muslims and says he will destroy ISIS, he will tax Carrier, Nabisco, Ford and others for moving their plants to Mexico, he SAYS WHAT ALL OF US HAVE ON OUR MINDS AND ARE AFRAID TO SAY! for fear of being called bigots, anti-women, anti-Mexican, anti-Muslim, the POLITICAL CORRECT LEFT in America created Donald Trump because we have been pushed into a wall and there is nowhere to turn. Now this is why he is winning the pundits have been trying for over 8 months to destroy him and saying well what he just said will finally be his downfall, the fact is his numbers only go UP because he speaks like all of us would love to say but are scared to death. The Europeans as well have awoken from their political correct slumber because of the ISLAMIC invasion happening right before their very eyes. Geert Wilders, Marine Le Pen, Victor Orban, Heinz-Christian Strache, Lutz Bachmann all have been screaming for the Europeans to wake up and by the grace of God they have and we have as well. That my friends is why Donald J. Trump is winning winning winning, there is no secret it is called survival!!

I agree with Anonymous @ 12:38. Trump speaks for a lot of people across party lines. He will not be the conservative that many of us would like, but he will likely be a moderate leaning right. Damn right...build the wall, kick out Muslims, destroy Isis, tax the Hell out of corporations leaving the US, call the Leftists what they are, scorn the enemies of this country out loud, and tell the pundits and the libs to kiss it. He has my vote.

Trump was going to win South Carolina anyway, the pope or not. Ted Cruz' base is simply too narrow to win, and all his "born again" or "Bible-believing Christian" rhetoric perhaps should turn off Catholics---our view of "born again" is a reference to baptism (a sacrament which gets short shrift among fundamentalists), and "Bible-believing" ignores the reality that both the word and (oral) tradition are the source of Godly revelation---not just the Bible alone. the Church produced the Bible, not the other way around. As for the pope on Trump, he simply said it was wrong for a candidate to build just walls, and not walls and bridges. And Gene, as for taxing the Hell out of corporations leaving the US, well...maybe we should take a more honest look at things. Like greedy unions and high taxes in northern states. The South has actually seen a lot of foreign investment, like the KIA plant in West Point, Georgia along the Alabama line and several auto plants in Tennessee. If you are endorsing protectionism---and it seems like you are---that is not the way to grow our economy.

Gene, the MSM including the FAKE conservative Fox News Channel would like us to believe Mr. Trump is not going to win, when in fact he is picking up white, Hispanic, Asian, African-American, Democrats, Republicans, independents, straight, gay, male, female, unions, enough is enough, we don't want the same promise makers the Republicans toss at us each election, he tells it like it is, like it or not and let me tell you millions like it! We want to hear the words I will bomb the s-ht out of ISIS because that is how you win a war utterly crush and destroy the enemy until they cannot breath. Remember Arabs and Muslims respect power and if one recalls both Gulf wars we saw the so called Iraqi Republican Guards on their knees BEGGING our troops not to shoot them. Muslims are very brave when up against people with no weapons to fight back with, speaking as a Roman Catholic and Arab I can tell you for certain that Muslims are in fact not the BIG BRAVE people the MSM shows on the news ISIS can be destroyed like Trump said with constant missal bombardment in a matter of weeks. You see Obama has no desire to do so, he may not be a Muslim but he has deep sympathy for the "religion of peace" in accordance with Islamic Law he is a Muslim being his father and step father were both Muslims and Obama attended a Madrassah and can recite the Quran in classical Arabic fluently. Gene, Trump has my vote as well and my guess is many people are not saying they are voting for Trump out of fear and will sweep to victory in 2016.

He is now being written about by Catholics in letters to the secular press. One such letter published yesterday complains that he is an embarrassment to the Church and should not be engaging in politics and, if he is going to, then when can we expect him to condemn Hilary Clinton for her rabid pro-abortion stance. I have never before seen a letter from a Catholic in the secular press complaining about any pope before but Pope Francis has brought this on himself.

I also agree with Anonymous @ 12:38. I think people are tired of the current political set up in the US and this goes also for Europe and the UK as well. It is spawning very right-wing groups because of the push to impose large-scale immigration on countries who cannot even house their own people. It is patently ridiculous and unsustainable. If anything, at least this has at long last galvanised the silent majority who have sat back for years and not had the courage to speak up. Trump is seen as a trailblazer for saying it like it is - speaking for the ordinary man and woman. I believe Obama is regarded as if not the least successful President then among the worst the US has ever had and the country has been pulled down by him and his administration. The west is accordingly a lot weaker than it should be compared to Russia and many believe that Obama assisted ISIS by pulling US troops out of Iraq.

Anonymous @ 10:36: Indeed, and I hope you are correct. The old boy system in DC is a Republican and Democrat club in which it is hard, with only a few exceptions, to distinguish party lines. Between the booze, the whores, the payoffs, and the homosexual cliques in the club the best interests of the Republic go largely unattended. The Republicans are as worthless as the Dems, but we have to vote for them because there is no other choice. Trump gives us a real choice. I hope he wins.