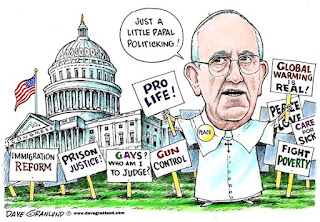 I know from my Italian relatives that there is an anti-clericalism streak in many Italians due to the Church's heavy and I mean heavy influence in Italian politics. It has been a lose, lose situation for the Church each time popes, bishops and priests have tried to influence Italy's political processes and it creates division and resentment toward the institutional Church, so much so that many Italians while remaining devotional Catholics and cultural Catholics disengage from the Church and the sacraments. They seldom attend Mass. And this was going on long before the major decline in Church attendance that has occurred in this country.

So, you get Pope Francis appearing to become political as it concern welcoming the stranger and immigrants and finding humane ways to deal with people who are escaping violence and poverty in search of a safer and more productive life even when it is done illegally.

You get pseudo-traditionalists in the Church who are ultra conservative politically castigating the pope for saying anyone who builds walls, like Trump, isn't Christian. Although now we are finding out the Italian that Pope Francis used didn't mean Trump isn't Christian but his desired action. There is a nuanced difference.

Then Pope Francis, although His Holiness has spoken clearly about the ideology of same sex marriage and how wrong it is; that children have a right (not just deserve) to one father and one mother and that in no way can same sex civil unions be called marriage, His Holiness is castigated in this country by the same ultra conservatives and pseudo-traditionalist for not engaging more in the political processes and protests in Italy, which despite is lack of endorsement or active endorsement of the goals of protest group  has led nonetheless to the Italian Parliament endorsing same sex civil unions but falling short of calling this marriage. It would allow for adoption by these couples.

Never mind that previous popes despite their political activism in the politics of Italy and strongly condemned divorce, artificial birth control, abortion and the like failed in their activism and Italy passed laws allowing these immoral things anyway.
Posted by Fr. Allan J. McDonald at Sunday, February 28, 2016

I have heard from a priest who told me that priests he knows have been telling him, priests who have given Francis the benefit of the doubt for the last three years, that they are openly saying "who does he think he is". Francis has no power to change or alter defined doctrine. He is only pope not God.

I am particularly critical of Pope Francis reducing his papacy to soundbites and off-the-cuff remarks in interviews. It is unfortunate and we can ask His Holiness in the most respectful ways to stop doing it and to be clearer or unambiguous. He speaks out of both sides of his mouth. I suspect there are those in the Cardinals and the College of Bishops who are sounding the alarm bell to His Holiness directly.

However, despite the non magisterial ocassion for these comments, what the pope said is not foriegn to Catholic moral theology. Theology tries to explain doctrine, but it isn't doctrine and in pastoral settings a priest must let people know what their options are in terms of a well formed conscience and how to reach a decision of conscience. The Church is clear about artificial birth control. But there are some women for whom a pregnancy would be a death sentence. She needs to consult with her doctor as well as with the Church and her family. If she chooses sterilization or artificial birth control that does not cause a spontaneous abortion, this is a decision of her conscience and she and she alone will be help responsible before her judgement.

The same with abortion. If a mother is diagnosed with a quick moving cancer during pregnancy. She can choose chemotherapy during the pregnancy even though it will indirectly cause a spontaneous abortion. The intent is not to end the pregnancy but cure the cancer.

She could choose, though, to forgo the chemotherapy and die in other to save the baby. That is her decision of conscience, as a Catholic she must make it in consultation with the Church, her doctors and family.

This is what the Filipino bishops said and it is sound theology, but not doctrine, theology it is:

"Pope Francis is reported to have given a press conference while en route to Rome after his historical trip to Cuba and to Mexico. He was apprised of the Zika virus and the possibility that pregnant women afflicted by the disease would seek abortion.

"The Holy Father was very clear and uncompromising about the evil of abortion. And we, your bishops, reiterate Church teaching: No matter that the child in the womb may be afflicted with some infirmity or deformity, it can never be moral to bring a deliberate end to human life. It is never for us to judge who should live or die!

"He then proffered the view that the evil of contraception was not of the same magnitude as the evil of abortion. Clearly, this was sound moral reasoning. The evil of stealing a few pesos cannot be compared with the evil of plunder.

"The Pope was in no way changing Church teaching on the unacceptability of artificial means of contraception. He however usefully called attention to two important moral precepts.

"First, there may be circumstances that invite a re-evaluation of the judgment on artificial means of contraception. Second, the prodding of conscience should always be heeded, as long as every effort is made to form conscience properly.

"These positions are not in any way new. They have always formed part of Catholic moral theology and belong to the treasury of the Church’s heritage in health-care ethics.

"Once more, the Pope has shown his sensitivity to complex human situations, allowed the world see the merciful face of the Church – the sacrament of a Merciful Lord – as he has remained the faithful steward of the message of the Gospel."

"The Church is clear about artificial birth control. But there are some women for whom a pregnancy would be a death sentence. She needs to consult with her doctor as well as with the Church and her family. If she chooses sterilization or artificial birth control that does not cause a spontaneous abortion, this is a decision of her conscience and she and she alone will be help responsible before her judgement."

Only complete or periodic abstinence is permitted to such women. Part of the clarity of the Church regarding artificial birth control is the very prohibition of sterilization or artificial birth control for women in such a situation. Any supposed reaffirmation of the clarity of the Church about artificial contraception while approving deviations from this clear teaching is a lie and a deception of the faithful. And be rest assured, those clergy who knowingly permit women to commit the moral sin of artificial contraception (no matter what the reason) as an "act of conscience," will also be held responsible for this sin and the failure of their priestly and pastoral duty at *their* judgment.