A DOCTOR MUST MAKE THE PROPER DIAGNOSIS IN ORDER TO TREAT THE DISEASE AND IT SEEMS THAT CARDINAL BURKE HAS DONE SO BUT WILL THE DISEASE BE TREATED PROPERLY? 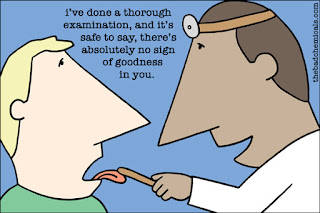 Another question and answer translated at Deus Ex Machina Blog:

Layman: Your Eminence has very interesting observations about the crisis of men within the Church. I would like to ask Your Eminence what are the most important causes of this crisis and what kind of solutions could be suggested to end this crisis. For example, the Holy League that Your Eminence is a patron of is one solution. Maybe some sort of sacred fraternities, maybe a return of a spirit of knighthood or maybe some other ideas?

Cardinal Burke: The root causes of the crisis of the Church, especially the Church in the West are very deep and reach back in the past. Namely, they reach back to the age of enlightenment.

While in the 1970’s a societal crisis ensued, which was rooted in the discarding of all authority was strengthened in a sense, with the liturgical crisis whose effects were the desacralization of the liturgy. And because of this, the people of God, the faithful in society found themselves in this crisis of authority, that propelled them toward this desacralization, and could not or did not receive any answers and did not have any support from the Church. And this caused this crisis to spread.

In order to exit this crisis, in which we presently find ourselves in, two things are needed. The first is a deepening of the catechesis that is started from childhood through to adult life. What is needed is a deep and thorough, honest catechism  that provides the basis of faith.

Today I encounter situations where faithful who want to defend their faith, are unable since they do not know its justifications (arguments). That addresses the first question: deep and thorough catechisis at all stages of development into adulthood.

Second issue is the sacredness of the liturgy. We need to return the sense of sacredness to the liturgy that needs to be built on this fundamental concept that it is not us that create the liturgy, but the liturgy is an act, action, undertaking performed by Christ and this notion that it is not us that create the liturgy, but that everything is directed toward that which Christ provides for us, should break through and give an impulse in the most minute issues. So in the case of internal church decorations and all the small things that serve to make the liturgy, should all serve to underline the fact that in the liturgy, the actions are of Christ. Therefore, a deep catechisis and a sacred liturgy are the ways to exit from this crisis.
Posted by Fr. Allan J. McDonald at Saturday, February 13, 2016

Traditional Catholics know that the way back from this apostasy is via the return of our Liturgy of Ages, the Sacraments in full, Catechesis, the daily Rosary & other pious devotions (Holy Hour, Benediction after Holy Mass, Retreats, etc.). The fact remains that not one Cardinal has yet called out the false teachings of the CC since Vatican II - everyone the same, no Catholic God, everyone can get to Heaven by good deeds, the all merciful God would never put anyone into Hell even those who do not believe in Him and do everything possible to blaspheme Him, calling Him the sky fairy etc.


Traditional Catholics already know that the way back from this Apostasy is the return of our Liturgy of Ages, full Sacraments, Catechesis, Daily Rosary, Devotional exercises (Retreats, Benediction, Holy Hours etc.). Who took these Divinely instituted supports from us? It was the post Vatican II Popes & Hierarchies. It has nothing to do with the laity who, since that time, have been left bereft of the means to attain their eternal salvation. While I respect Cardinals Burke, Sarah, Pell etc. the fact remains that the power lies with them to stand out from the rest of the Hierarchy and denounce the Lutheran agenda which they have aspired to and tell it like it is & has been for decades. Christ's faithful have been left stranded. Their shepherds have left them to the wolves and no-one in the Hierarchy is doing anything about it. Going around celebrating TLM and talking to different audiences about the state of the CC is all very well & good, but actions are desperately needed. Pressure in the same form as took place against Pope Benedict XVI should be applied. We, the laity & traditional priests, should not have to put up with this situation any longer. Traditionally-minded Cardinals please stand-up for the One Holy Catholic & Apostolic Church that Jesus Christ founded no matter what temporal cost it may bring to you but in the absolute knowledge you are worthy of the title Apostle of Christ.