NEW PORTABLE, MOVEABLE ALTAR AT THE BASILICA OF THE NATIONAL SHRINE OF THE IMMACULATE CONCEPTION

For years, there has been this movable altar in front of the magnificent permanent high altar of the Shrine of of the Immaculate Conception: 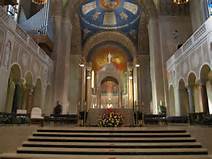 Then a lightweight but somewhat nice portable, movable altar was created for Pope Francis Mass outside of the Shrine for the canonization of St. Juniper Serra. Please note the "Benedictine Altar arrangement" which I am sure that Monsignor Guido Marini must have insisted upon and had to authority to do it: 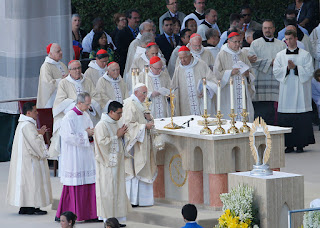 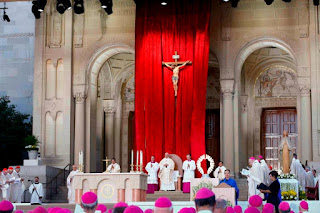 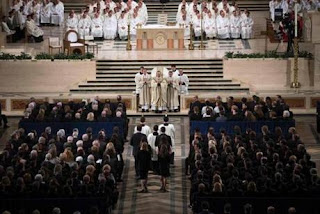 This is the actual altar of the Shrine which is not now used except in 2010 when the Extraordinary Form Solemn Sung Pontifical Mass was celebrated there.  I now believe that this form of the Mass is no longer welcome there which is quite sad. Maybe the wild interest and the cappa magna killed it?

Believe it or not, I attended an Easter Sunday Mass there in 1977 and they actually used this high altar for that Mass although facing the congregation. : 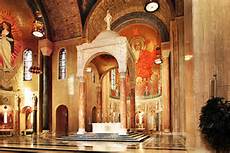 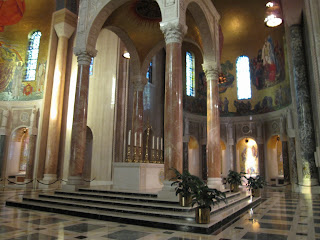 This is the altar at the Pontifical Solemn Sung Mass in 2010. Something about this Mass irritated the powers to be at the Shrine. It was packed and it was EF and there was the cappa magna! It has not be allowed since: 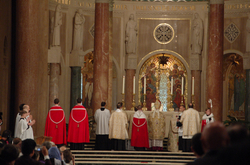 Here is the complete Mass as shown by EWTN in 2010. The actual procession for the Mass doesn't start until about minute 43. However, if you listen to the chants, it is far superior than what is normally heard at the Shrine as exemplified by Justice Scalia's funeral. Please note the different quality of the choir and chanting--non performance and non triumphalistic! It isn't bombastic!

You can also watch the prelude of the entry of the Archbishop celebrant wearing the cappa magna. But this part takes nearly 43 minutes before the Mass actually begin. The PATFOTA and Introit begin at minute 49, with a sober sound from the schola. This could have taken place in the Ordinary Form Mass for Justice Scalia but the Shrine's choir took over and it didn't happen. We got bombast instead with a cantor waving her arms in huge gesture to cajole and manipulate the congregation into singing. Thus she became the focus of attention in doing so, eclipsing the priest celebrant in his role:

"Believe it or not, I attended an Easter Sunday Mass there in 1977 and they actually used this high altar for that Mass although facing the congregation."

Interesting. When did the basilica have the portable one brought in, anyway?

There was a portable altar there in 1977 and when we walked in on Easter Sunday I recalled being happy that it was gone and the high altar was being used. It was absolutely packed and laity were sitting confrontationally to each other in the sanctuary where the priests were for the funeral.

I suspect the freestanding altar was placed there around 1966.

Yes, it was Bishop Edward J. Slattery of Tulsa Oklahoma who offered the Pontifical Mass that glorious day, and by the way Bishop Slattery offers the OF facing the High Altar ad-orientiem in his cathedral with the Benedictine altar arrangement. Sad but true as Father has pointed out the TLM was packed that day to the rafters young, old, Black, White, Hispanic, and families, but someone in higher places noted this and NEVER allowed the TLM at the Basilica again! How sick is it that we had a Basilica PACKED with worshipers and the hatred of the TLM was so strong that it was banned there!!! This is where we have come to, a church filled for our ancient Mass and low and behold this was the crime, the powers that be will never destroy our ancient Mass oh they have tried for over 50 years and they still cannot stamp it out, but they will continue to do so.

Truth be told I like the new portable altar, at least it looks nicer than the previous one, and I liked it the moment I first saw it back in September.

And regarding the TLM I've heard that the bishop there is pretty liberal, but perhaps not as much as Dolan. I'm glad he hasn't shut down Juventutem DC for now. Hopefully and God-willing the TLM will be celebrated there again soon, what happened in 2010 was a big accomplishment by itself, I can imagine, and I hope we won't have to wait another 40 years like last time.

Father McDonald, forgive me for the following off-topic post. Perhaps you and your readers find the following interesting and useful:

I just came across the newspaper archive of Arkansas Catholic, of the Diocese of Little Rock. I performed several searches and, for example, found the following:

December 29, 1961 A.D. "View On Contraceptive Pill Use In Line With Church Teaching"

Three Catholic theologians, including the future Cardinal Pietro Pallazini (elevated by Pope Blessed Paul VI), argued that women in danger of rape may use contraception to prevent conception. "A woman who has been raped or very probably will be raped...has no obligation to undergo pregnancy". The article also mentioned nuns in the Congo who faced assault.

The article in question is on the right side of the Arkansas Catholic archive page.

If anybody is interested, here is a March 9, 1956 A.D. article about the use of the vernacular to permit Catholics to "understand" the Holy Week Rites. Liturgical vernacularization of the Roman Rite was underway long before Vatican II.

There is a feature above the article to expand the page to "full size image".

having worked at the Shrine, the High Altar is used more than you think, but for televised Masses and normal Sunday Masses they use the portable because its closer to the congregation.

The high altar under its ciborium magnum is freestanding and would permit celebration in either orientation. The idea of a forward altar is to facilitate congregational participation in the vernacular Mass, which is essentially a dialogue between celebrant and people.

A few years ago Westminster Cathedral ditched its forward altar and slightly increased the space behind the high altar; all OF Masses are currently versus populum. The Latin Mass Society organises two EF High Masses there every year, and usually they are Pontifical. Two auxiliary bishops (Alan Hopes and John Arnold) who have celebrated in the past, have since been posted to dioceses, thus adding to the number of diocesan bishops who have celebrated the Old Rite.

Perhaps you need something like the LMS, which works closely with the bishops and has eminent patrons (including Sir James MacMillan, Britain's greatest living composer). A church calling itself a National Shrine could hardly ban the TLM without giving reasons, and they need to be good ones; otherwise some senior clergy will end up with egg on their faces.

Shock/horror for Gob, Bishop Slattery wore the cappa magna! He can no longer whinge about Cardinal Burke ...