POPES EATING CROW; AND WHAT ABOUT JEWS IN ISRAEL WHO BUILD WALLS, I GUESS THEY AREN'T CHRISTIANS EITHER, OH, WAIT!

I do think that Pope Benedict was more humble about eating his crow: 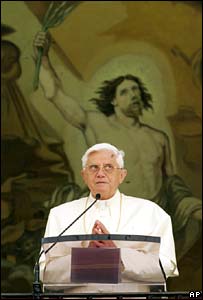 Pope Benedict XVI has apologized in person for causing offense to Muslims in a speech in Bavaria last week.
He said the medieval text which he quoted did not express in any way his personal opinion, adding the speech was an invitation to respectful dialogue.


Pope Benedict XVI issued his apology from the balcony at his residence at Castel Gandolfo outside Rome as gave the Angelus blessing.

"I am deeply sorry for the reactions in some countries to a few passages of my address at the University of Regensburg, which were considered offensive to the sensibility of Muslims," he told pilgrims.

"These in fact were a quotation from a medieval text, which do not in any way express my personal thought.

"I hope this serves to appease hearts and to clarify the true meaning of my address, which in its totality was and is an invitation to frank and sincere dialogue, with mutual respect."

However, when it comes to Trump, poor old Fr. Frederico Lombardi had to do the crow eating for Pope Francis, which isn't the most humble way to apologize: 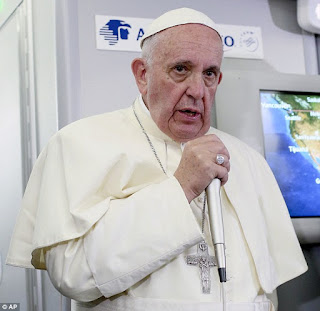 The Vatican today executed a speedy climb-down in its feud with Donald Trump - handing the Republican White House hopeful a major political victory.

Pope Francis's suggestion that Trump was 'not Christian' because of his views on immigration was not a personal attack on the candidate, Vatican spokesman Father Federico Lombardi said on Friday.

Lombardi told Vatican radio that the pope's comments, which were denounced by Trump, were simply an affirmation of his longstanding belief that migrants should be helped and welcomed rather than shut off behind walls.

He also leaned toward confirming Trump's contention that his statement that Trump was 'not a Christian' was based largely on 'what he was told' about the billionaire's position.

But in the same breath, Lombardi defended the Pontiff's statement from Thursday and declared that he had said nothing new.

'The Pope said what we already know, if we followed his teaching and positions: We shouldn't build walls, but bridges.'

'He has always said that, continuously,' he added. 'He also said that in relation to migration in Europe many times. So this is not a specific issue, limited to this particular case.'

'It's his generic view, coherent with the nature of solidarity from the Gospel.'

My Comments: Pope Francis made a big mistake entering the Reality Show that is Donald Trump's presidential bid. His Holiness added and abetted this 24 hour a day reality show and ratings are  going to sore.
Apart from an apology to Trump, I think the Church is owed one. This is embarrassing coming from the Vicar of Christ and Supreme Pontiff. I think His Holiness could have made his point very well without "excommunicating" a non Catholic and implying that only Christians are the only ones building bridges since building walls now excommunicates you from Christianity defacto, automatically.

The Holy Father, though, has an obligation to make it clear to the Catholic world who is Catholic and who isn't and I would recommend starting with Joseph Biden and Nancy Pelosi and their mafia like stand on the murder of innocent human being in the womb.

Abortion is not the lesser of two evils. It is a crime. It is to throw someone out in order to save another. That’s what the Mafia does. It is a crime, an absolute evil.
Posted by Fr. Allan J. McDonald at Friday, February 19, 2016

Mr. Trump is the only one who has called Francis out for his media blowups. Shame on the bishops and others for not calling out this pope on his odd and frankly un-Catholic actions and opinions. Bergoglio like Obama, and Sanders were installed by unseen forces all three share a Marxist-Leninist ideology and it is not by accident.

Note the careful phrasing of Benedict's statement; he regrets 'the reactions in some countries' but does not retract a word of what he said. He does not apologize for 'causing offence to Muslims'; he is sorry that they should have taken offence, which is a different matter entirely.

Amongst senior Churchmen, the only one to make negative comments on the address was (reportedly) Cardinal Bergoglio. It sounds true to form.

In fact the agitators who seized on that particular passage missed the point. The whole address, on faith and reason, can be seen as critical of (among other things) Moslem attitudes, past and present. It is probably the most significant utterance by a pope in the last quarter-century, and is highly relevant today. Of course Benedict was the sort of intellectual who in Francis's scheme of things should remain 'inter silvas Academi' and not aspire to the episcopacy.

Francis might have to eat crow about his contraception comment too. According to Fr Z, the example Francis cited about Paul VI allowing Nuns to use contraception, didn't happen: