I'll let this speak for itself. The photo in this morning's Augusta Chronicle shows a predominantly Catholic crowd before an abortion clinic which by the way is less than a mile from my mother's townhouse in Augusta.

Amid an increasingly sick culture, the case must be made for abstinence and 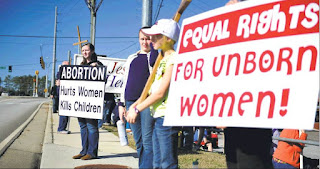 By The Augusta Chronicle


In this 2013 photo, people rally to mark the 40th anniversary of Roe v. Wade at Augusta Care Pregnancy Center near Walton Way Extension.
Let’s see if we got this straight: We’re constantly told by the dominant culture that abstinence before marriage is stupid, impractical and unrealistic. It’s mocked openly, and so are its adherents.
Yet...

The news and entertainment media, along with the Democrat Party, have been selling promiscuity, self-gratification, selfishness and irresponsibility for decades now. And despite devastating societal indices to the contrary, they want to make out like it’s all consequence-free.

It’s as if your most rash, immoral, devil-may-care older brother were in charge.
In fact, Democrats – fairly successfully – argued in 2012 that there was a “war on women” because birth control and abortion drugs aren’t free enough or, one supposes, are not available at the grocery store checkout stand with the Tic Tacs.

So, in effect, they were angry – even militant – that you taxpayers aren’t doing a better job funding their recreational sex.

They also defend, to the death, abortion on demand – which kills a young life – and attack anyone who questions public funding for, say, Planned Parenthood.

So, you’re not doing a good enough job funding the cleanup for recreational sex, either.

Indeed, when undercover videos seemed to show Planned Parenthood officials amenable to trafficking in aborted baby parts for profit, who got indicted? The video makers.

They rarely talk about what kind of behavior leads up to abortion, or whether it’s smart behavior. On the contrary, it’s often reckless, casual, self-absorbed actions, from which the only perceived escape is snuffing out the life that’s been created.

And if the child is allowed to live, often it’s in less-than-ideal circumstances – ones that often aggravate society’s worst ills: poverty, illiteracy, crime, drug use and more. Look it up. This is not opinion.

But we’re to believe abstinence is the impractical and unrealistic choice? How realistic and practical is it to live heedlessly and expect no consequences?

Besides, shouldn’t folks decide all this for themselves? Particularly young folks?

The case is overwhelming, in every way.

Not just morally, though it definitely is that. Phelps doesn’t preach to kids. In fact, he tells them to do what they want.
He just makes a rock-solid case for abstinence, marriage and individual responsibility.

The risk of sexually transmitted disease goes away (and if condoms did that, we’d see STD rates slow as condom use rises, but that’s not been the case). The risk of poverty, particularly for a child, plummets. Risks for crime, drug use, school problems and more are sharply reduced.

In short, being abstinent is being responsible – not just to others, but to oneself.

Liberals may not like that. But they can’t successfully refute it.

Nor can they seem to bring themselves to tell kids that. It takes people like Scott Phelps – and Susan Swanson, executive director of the Augusta Care Pregnancy Center which helps mothers and protects children in crisis pregnancies. Swanson has tried for years to enhance abstinence education in area schools, in part with Phelps’ sophisticated – and non-preachy – curriculum at Abstinence and Marriage Education Resources in the Chicago area.

Again, for many youths it’s the first time they’ve heard this message – and, Phelps says, many of them find it refreshingly honest and helpful.

Moreover, he says, abstinence isn’t enough; it needs to be paired with marriage – otherwise, you’re just putting off the corrosive effects of the larger culture’s “anything goes” game plan.

“If you want to talk about poverty,” Phelps told us recently, “you have to talk about marriage.”
How sick is our culture? A Super Bowl ad humorously depicted a baby in utero reacting to the father’s Doritos chips during a sonogram. The left complained that the ad “humanized” the fetus.

Good heaven. No doubt we need to humanize humanity.

We don’t think trying to do that is stupid at all. In fact, we think it’s pretty cool.
And desperately needed.
Posted by Fr. Allan J. McDonald at Sunday, February 21, 2016

Below is some of what Father Shenan Boquet, who heads Human Life International, had to say on the death of Antonin Scalia.

"We mourn with others the passing of another pro-life champion, Supreme Court Justice Antonin Scalia.

With his passing, our nation has lost a strong and unwavering voice on behalf of truth, life, and family on a Court that is adrift, with little remaining sense of natural law or respect for the Constitution that gives the Court its mandate.

We will surely miss Justice Scalia. Yet, his life, example, and enduring legacy serve as a reminder that we will never give up in our fight against this Culture of Death. May Our Lord raise up and empower many more men and women to further the heroic work of Justice Scalia.

Speaking at a Knights of Columbus centennial celebration, Justice Scalia said, 'Have the courage to have your wisdom regarded as stupidity. Be fools for Christ. And have the courage to suffer the contempt of the sophisticated world.'

Yes, and the Democrats don't like to talk about the two main factors behind poverty in the United States---(1) years of schooling, as in, did you at least finish high school? and (2) if you had kids, did you do so AFTER going to the altar to exchange vows? The poverty rate is very low for people who follow those two suggestions. You only have to look around Macon (especially south of 830 Poplar Street or below the old Central of Georgia railroad tracks that cut through Mercer) or southside Atlanta to see the ill effects of our "anything goes" culture. There is of course some hypocrisy in the Black Lives Matter movement---far more blacks die from abortion each year than shootings, yet when was the last time a black Democratic politician condemned abortion?