MY CLAIRVOYANCE GOT THE BASILCA OF THE NATIONAL SHRINE OF THE IMMACULATE CONCEPTION RIGHT AS THE CHURCH FOR JUSTICE SCALIA'S REQUIEM; WE AWAIT TO FIND OUT IF MY OTHER CLAIRVOYANCE GOT IT RIGHT; AN EF REQUIEM OR AN OF FUNERAL MASS? AND RAYMOND CARDINAL BURKE CELEBRANT? 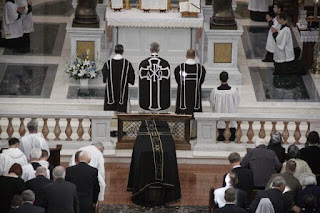 If you look at my first post on Justice Scalia's death, I said that I thought his funeral would be at the Basilica of the National Shrine of the Immaculate Conception. My clairvoyance, as usual, was correct.

I also mused that since Cardinal Wurel has an antipathy toward the older form of the one Latin Rite, that he would not be the celebrant if it is EF but rather canonist, legal scholar, Raymond Cardinal Burke would be.

I think that if Cardinal Burke is the celebrant, Father Paul Scalia, son, will preach the homily and it won't be a canonization homily.

And if OF, it will have EF sensibilities. Mark my word! But at any rate, we can be sure that if an EF or OF, the pall will be placed on straight!
Posted by Fr. Allan J. McDonald at Wednesday, February 17, 2016

Fr. Paul Scalia will celebrate an Ordinary Form Mass of Christian Burial, with Cardinal Wuerl and Bishop Loverde attending in choir. There's been no mention of Cardinal Burke showing up.

It will definitely have a NO sensibility with the judge's cremated remains lying in state as opposed to his body.

I have not seen from any reputable source that he was cremated, which by the way, is allowed and was allowed in some countries prior to Vatican II, i.e. Japan as long as there was not a denial of the resurrection of the body in doing so. Do you have any evidence, first that there was a cremation and second that if he was cremated, he was denying the bodily resurrection?

I served the Requiem pictured in this post at Thomas Aquinas College. I believe that was the Requiem of our beloved founding president, Ronald McArthur!

If what Pastor Montanus said is true, that would be sad. Of course the sensibilities of the Faithful (the truly Faithful, not the fake catholics) are ignored when it comes to the EF. Cardinal Wuerl must have a screw loose, if he has antipathy to the EF. He's in good company with Abortion drooler Nancy Pelosi

Moving ahead rapidly in the Sweepstakes.

Father, as soon as you find out if it is the EF please let us know!!!! PRAYING hard that the EF is the choice. Such exposure to millions of people if it is telivised nation wide!!!

I'd love to hear a reasonable discussion/explanation of cremation and "denying the bodily resurrection". Cremation and rotting are the same process (oxidation) that yield the same results...yet those who choose the former are suspected of having some evil motivation.

I would be very surprised if anyone other than Father Scalia was the presider at the Mass. He is well versed in the Extraordinary Form. And why are the six candles not flanking the catafalque in the picture of the Requiem Mass? What happened here?

god, your characterization of cremation went out with the 23 Skadoo

I was just at the Basilica last Saturday...it is unfortunate that the entire front section immediately in front of the altar is under construction and all the pews have been taken out and folding chairs put in place. They are beginning work on the mosaics on the main dome which will be complete in December 2017. The new stand alone altar is in place which was the one used by Pope Francis when he visited. No candle sticks on top or central crucifix but it does look better than the previous portable one with the table cloth on it. I at least hope we don't have to endure the Choir standing behind the altar in their blue robes if there is an OF mass. Please put them in the choir loft!

NOTICE: Coming to a Catholic parish near you... A special collection for the noted repairs to the dome mosaic. (True story)

Consolamini, I don't think we had the candlesticks to flank the casket in the Requiem at TAC. Also, Father Berg who is the FSSP Superior is a graduate from TAC and he does return from time to time.

Check out all the comments in the link I am posting in this comment. A lot more debate on which rite will be celebrated Saturday for Justice Scalia's Requiem.

Gob, I apologize. I should have referred to you as an "Obama drooler." You know the guy that believes there are 57 states and that Austrians speak "Austrian."