POPE FRANCIS IN HIS HOMILY TODAY GIVES AN APOLOGETIC FOR THE THEOLOGY OF HUMILIATION THAT EXISTED IN RELGIOUS ORDERS PRIOR TO VATICAN II AND SHOWED BEAUTIFULLY IN THE NUN'S STORY STARRING AUDRY HEPBURN! 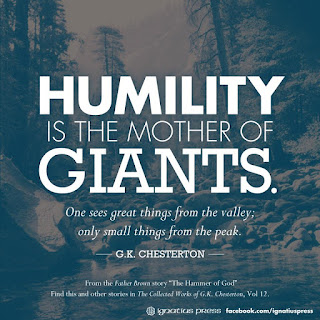 As I watched The Nun's Story on Saturday night, I was struck by the focus on humility that appeared to boarder on humiliation in the formative years of the novices depicted in the movie. I think that this dramatic presentation was very accurate in what it portrayed in religious life prior to Vatican II which post-Vatican II religious life rebelled against in the most haughty way and inverted something beautiful into something quite ugly.

Pope Francis continues to preach about humility in the most pre-Vatican II way and similar to The Nun's Story experience of humiliation in preparing for final vows.

But he also gives a wonderful apologetic for Mortal Sin that cuts us off from God and the Church. It isn't just one sin that does this, but a lifestyle opposed to God. Pope Francis calls this "corruption" and His Holiness sees it as hopeless for the sinner who is corrupt because the sinner doesn't see his corruption but rather embraces it as  a "good." This of course is blasphemy of the Holy Spirit to call something evil (a lifestyle at that) as "good."

Contrary to what many falsely belief about Pope Francis, His Holiness' theology of mercy is not built upon accepting one's sin as good and simply trusting in mercy without our corresponding repentance of our sins. His Holiness expects as the Church teaches, repentance, which always means an examination of conscience, sorrow for sin, confession, penance and a firm purpose to avoid sin in the future.

The corrupt person is the one who doesn't repent because he doesn't believe he's a sinner or corrupt!

This is a Vatican Radio summary of Pope Francis' stunningly pre-Vatican II homily on sin and humility this morning:

King David "is one step away from corruption," says the Pope - but the prophet Nathan, sent by God, makes him understand the evil he has done. David, adds Francis, is a "sinner, but holy."

The wounds of corruption are difficult to heal

Though he is a sinner, David is not corrupt - the Pope notes - because "the corrupt do not realize that they are:"

"It takes a special grace to change the heart of a corrupt person. And David who had a noble heart, said: 'Oh, it's true: I have sinned!' He acknowledges his guilt. And what does Nathan say? 'The Lord forgives your sin, but the corruption that you have sown will grow. You killed an innocent man to hide adultery. The sword shall never depart from your house.' God forgives the sin; David converts but the wounds of corruption are difficult to heal. We see this in many parts of the world."

David finds his son Absalom has become corrupt, waging war on him. But the king gathers his men and decides to leave the city, allowing the Ark to return. He does not call on God to defend him. He leaves "to save his people." And this, Pope Francis reveals, “is the way of holiness that David, after that moment of corruption, begins to follow."

David, with covered head and weeping, leaves the city amid the jeers of some. Among these, Shimei calls him "murderous" and curses him. David accepts this because, the Pope says, if he is cursed, it is the Lord’s doing:

"Then David said to his servants: 'My own son, who came forth from my loins, is seeking my life:’ Absalom. And then, ‘let this Benjaminite go on cursing since it was the Lord who ordered him to.’ David knows how to see the signs: it is his moment of humiliation, it is the moment in which he is paying for his guilt. 'Perhaps the Lord will look upon my affliction, and make it up to me with benefits for the curses he is uttering this day.’ And he puts himself in the hands of the Lord. This is the path of David, from the moment of corruption to this entrusting of himself into the hands of the Lord. And this is holiness. This is humility.”

“I think all of us, if somebody says something bad to us, would immediately say that it’s not true." Or we do as Shimei does: "We offer an even uglier response."

May Christians have the grace of humility

"The only way to humility is through humiliation. David’s destiny, which is holiness, comes through humiliation. The destiny of that holiness which God gives to his children, gives to the Church, comes through the humiliation of his Son, who allows himself to be insulted, who allows himself to be placed on the cross - unjustly ... And this Son of God who humbles himself, this is the way of holiness. And David, through his behavior, prophesizes this humiliation of Jesus. Let us ask the Lord for the grace of humility for each of us, for the whole Church - but also for the grace to understand that humility cannot be achieved without humiliation. "
Posted by Fr. Allan J. McDonald at Monday, February 01, 2016

So when being sneered at for being a "older brother" who's not hip enough to luv the younger brother while he still is enjoying the spoils of the father's estate, the proper attitude is silence?

What if our umbrage is not about personal vainglory but defending the truth about various constituencies who are constantly maligned in the news, pop culture, academia, and government?

Conservatives, traditionalists, etc. are the butt of jokes, casual cruelty, Political correct persecution (from the mild being passed over to the harsh fired from jobs for saying a mere 'word' that some don't like, while they get to hurl all manner of abuse at us that we don't like but see, our feelings don't matter).

Most of what we do is silently take it. That's why it's almost unheard of for the right-wing to riot.

So if silence before unjust aggression (verbal, procedural, social, cultural, political and legal if not physical) is "humility" I think we showcase ourselves pretty humble.

If there's a problem it's in how we control ourselves when finally goaded to speak up. I agree that we all need to be polite and calm if at all possible and not pay vulgarities with vulgarities, or injustice with injustice.