MUST SEE TV! EWTN'S LIVE COVERAGE OF THE ORDINATION OF A BISHOP IN THE ORDINARIATE AND USING THE GLORIOUSLY NEW "DIVINE WORSHIP, THE MISSAL"

Pope Francis expressing esctatic delight at an authentically Catholic Roman Missal promulgated by His Holiness in keeping with what Vatican II actually requested, for the Ordinariate, "Divine Worship, the Missal" which carries Pope Francis imprimatur. The bishop elect is the one who will be ordained in Houston tomorrow night, February 2nd and shown on EWTN, must see television,  Bishop-Elect Steven J. Lopes as the first bishop of the Personal Ordinariate of the Chair of St. Peter: 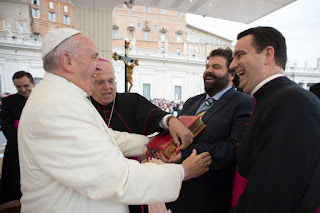 The Ordination Mass will take place in Houston's new Roman Catholic Cathedral. It will be interesting to see if the Mass is ad orientem and if kneeling is allowed for Holy Communion as this cathedral unfortunately has no altar railing, unlike the new cathedral in Raleigh which will.

As you know, I believe that the Ordinariate's gloriously new "Divine Worship, the Missal" is what we will have applied to our current Ordinary Form Missal, minus of course, the Anglican patrimony elements. This means specifically the restoration of the Tridentine Prayers at the Foot of the Altar, reorientation of the greeting back to being immediately prior to the Collect. The encouragement of the Gradual and Tract printed in the missal itself as in the EF's Missal as well as the traditional method of saying or chanting the Introit and printed in the missal as such along with the offertory antiphon currently missing from the Roman Missal.

As well, we will have as the first option the EF's form of the offertory prayers to include the lavabo and psalm to be said during incensing the altar.

The option of the three-fold "Lord, I am not worth..." will be granted too.

The Last Gospel will be restored.

I must say that if my bishop approved, I would start using the Ordinariate's Missal for our 12:10 Mass each Sunday with the last Sunday the EF version.  Then there would be consistency in calendar and style of Mass compared to the Ordinary Form which does not offer the same consistency. HOW ODD, STRANGE AND DISCONCERTING IS THAT????????????????????? 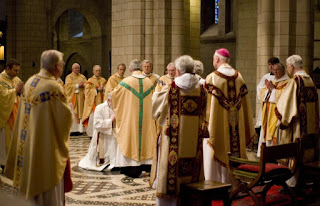 The following is from the blog, VIEWS FROM THE CHOIR LOFT:


EWTN Broadcast • Mass of Ordination • First Bishop of the Personal Ordinariate of the Chair of St. Peter


THIS TUESDAY, February 2nd, on the Feast of the Presentation of the Lord, EWTN will broadcast live from 7 p.m. to 9:30 p.m. (Central Standard Time) the ordination of Bishop-Elect Steven J. Lopes as the first bishop of the Personal Ordinariate of the Chair of St. Peter. This will take place at the Co-Cathedral of the Sacred Heart in Houston.

Maestro Edmund Murray will be directing for the ordination. He is the former Music Director of St. John’s Seminary in Boston and Our Lady of Atonement (Anglican Use Liturgy) in San Antonio, Texas. He is currently the Director of Music at Our Lady of Walsingham in Houston, Texas.

Our Lady of Walsingham is the Principal Church of the Ordinariate serving Roman Catholics nurtured in the Anglican tradition. It was established in 2012 by Pope Benedict XVI. With only three such Principal Churches in the world, the elevation by Pope Francis of Bishop-Elect Steven J. Lopes is highly significant, as he is the First Bishop of the Personal Ordinariate of the Chair of St. Peter. With his ordination, Our Lady of Walsingham will be elevated to a cathedral.

UNDER THE DIRECTION OF EDMUND MURRAY, the music will be provided by a combined choir comprised of the Galveston-Houston Archdiocesan Choir (Dr. Rick Lopez, Director), Co-Cathedral of the Sacred Heart Schola Cantorum (Dr. Crista Miller, Director), and Our Lady of Walsingham Parish Choir. The organists will include M. Jackson Osborne, former Organist and Choirmaster at Our Lady of Walsingham, Dr. Crista Miller, and Dr. Kevin Clarke, Director of Music and Organist at St. Theresa Catholic Church in Sugar Land, TX.

This televised liturgy will be a rare opportunity to observe a liturgy in the Anglican tradition within the Roman Catholic Church. Also notable will be the presence of six cardinals and over thirty bishops. Be prepared for lengthy processions!

The music, which promises to be exquisite, will represent a distinct mix of Roman Catholic and Anglican traditions including a variety of Gregorian and Anglican Chant, works by William Byrd, Palestrina, Hans Leo Hassler, Healey Willan, and of course beautifully arranged hymnody. Unfortunately, the prelude will not be televised as it includes a sumptuous range of works by Hubert Parry, Jean Langlais, J. S. Bach, Charles Villiers Stanford, John Ireland, and Flor Peeters.

Finally, with a nod towards Murray’s Catholic roots in Boston, the Mass will also include an Alleluia by Theodore Marier, Michael Burgo’s beautiful Anima Christi, and a newly commissioned work for this occasion by yours truly.

DMUND MURRAY has done extraordinary work wherever he has gone. With his wife, Chalon, he built one of the finest music programs in the United States at Our Lady of Atonement—essentially a choir school in practice, if not in name. Named Director of Music in 2015 of Our Lady of Walsingham, I expect Murray will grow yet another extraordinary program as the years progress.

AM HONORED TO HAVE BEEN COMMISSIONED for a new work for this ordination, which will be sung during Communion. A setting of Psalm 111, Magna Opera Domini (“Great are the Works of the Lord”) is Bishop Lopes’ episcopal motto which appears on his Coat of Arms.

This piece, inspired by the works of Theodore Marier, utilizes a chant-based antiphon in Latin for the congregation. The verses, in English, alternate unison chant with various choral textures.

I have heard from folks who have reason to know, at Our Lady of Walsingham, and can report that we can expect to see at least 6 cardinals, including Gerhard, Cardinal Mueller as the principal consecrator, as well as Cardinals Levada, Wuerl, DiNardo and O'Malley. It is said that about 40-60 bishops and 160 priests are expected.

Unfortunately, the Co-Cathedral of the Sacred Heart is not set up for ad orientem celebration, so the Mass will be an anomaly, in Ordinariate terms, in that regard in that it will be versus populum. It is also highly unlikely that there will be provision, such as one or two prie dieus, for reception of Holy Communion kneeling; the gossip is that that would give some of the co-cathedral staff a heart attack, so one would not to do that. I also hear that Fr. Michael Earthman, an archdiocesan priest very well disposed to the Ordinariate, will be the local commentator for EWTN.

Ordinations, including those to the Ordinariate, are according to the revised Roman Pontifical, except for those groups like the FSSP who use the older books exclusively and have permission to use the older form (see Universae Ecclesiae 2011). As far as I know the only permitted translation is still basically the old ICEL one (the revised one of 1997 was rejected in its entirety by the Holy See).

There is no specific Ordinariate rite of ordination; it would make no sense to have one, since the whole point of Anglicanorum Coetibus is that former Anglicans are ordained as Catholic priests.

I would merely add to John Nolan's remarks that former Anglicans are ordained into the Latin Rite of the Roman Catholic Church.

It is a great disappointment to the Anglican Ordinariate faithful in the UK that it appears that the ceremony and festivities in Houston's new Cathedral will not be broadcast by EWTN in Britain.

Correct me if I am wrong, but does Bishop Lopes' ordination automatically make North Americas' Prime Church of the Ordinariate, the shrine-church of Our Lady of Walsingham, Houston a Cathedral. . . .?