THE TERM "THE LAST RITES" STILL EXISITS DESPITE THE AVERSION THAT SO-CALLED POST-VATICAN II CATHOLICS HAVE ABOUT USING THIS VERY, VERY GOOD THEOLOGICAL TERM! 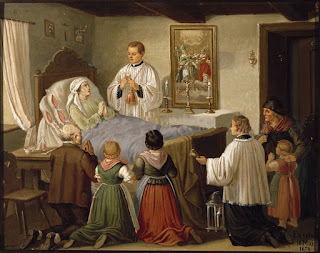 At Deacon Kendra's Blog and before the body is even cold there is a question of whether or not Justice Antonin Scalia received the Last Rites.

This is what he writes and it appears that he is just as confused as anyone about what the Last Rites are:

More details are not known, though it’s been reported (perhaps incorrectly) that a priest had given Justice Scalia “last rites.” (That is actually a misnomer. It is properly called called The Sacrament of the Anointing of the Sick.)

Of course the good deacon is wrong. In fact, a good deacon could offer "the last rites" of the Church to a dying or dead person even if the Sacrament of the Anointing of the Sick, aka, Extreme Unction is not included. Of course a deacon or a lay person cannot offer the Sacrament of the Anointing of the Sick or Confession with the Apostolic Pardon, but either a deacon or a lay person can offer the portion of the ritual for the sick that includes prayers for the dying and once the person is dead, the prayers for the dead. They can also offer the dying person, if they are capable, Holy Communion   which would be that dying person's Last Communion and thus would be called Viaticum, Food for the Journey to the Throne of Judgement before Divine Mercy. These prayers and Viaticum would be the last rites too!

More importantly, the official prayers for the dead person at the moment of death are a part of the last rites.

With that said, it is incumbent on priests to make clear that the Sacrament of the Anointing of the Sick, aka, Extreme Unction is not to be used only at the point of death making it exclusively a "last rites" sacrament. It should be celebrated frequently for a chronically ill person for the purpose of spiritual and physical strength and healing provided by God's grace in this marvelous sacrament where Jesus becomes a soothing, healing ointment for body and soul.

But when I offer the Anointing of the Sick, aka, Extreme Unction, to a person on the verge of dying and include in it the apostolic absolution (which presumes sacramental confession) as well as Holy Communion as Viaticum and  the prayers for the dying found in our ritual for the sick that include the Litany of the Saints, this indeed composes THE LAST RITES of the Church and the term is a very good term to use. This ritual also includes prayers for one who has just died and these prayers are also a part of the Last Rites.

There is no hope that the person receiving what I just described will live in this temporal world. Through the celebration of  Last Rites, the Church Militant sends them with Christ their Advocate to their personal judgement before the throne of Divine Mercy.

Deacon Kandra does point out some good canonical advice though:

The 1983 “Pastoral Care of the Sick, Rites of Anointing and Viaticum” translates par. #15:

When a priest has been called to attend those already dead, he should not administer the sacrament of anointing. Instead he should pray for them, asking that God forgive their sins, and graciously receive them into the kingdom. But if the priest is doubtful whether the sick person is dead, he may give the sacrament conditionally, (no. 269) (My comment: The prayers for the dead person exclusive of the Sacrament of the Anointing of the Sick, aka, Extreme Unction, is considered the Last Rites, even though it isn't a sacrament. The confusion that so many have, including the good deacon, is that the Last Rites must include the Sacraments of the Church, i.e. Confession, Anointing and Viaticum. While these can comprise the last rites for a person who is dying, any of these to include the prayers for the person who has just died would be the last rites of the Church. A lay person, in the absence of a bishop, priest or deacon, could offer the Church's prayers for the dead at the moment of death as a form of the last rites of the Church!)

And there is this:

An unspoken criteria, alluded to in canon 1005, is that the sick person must be alive. All the sacraments presume that the recipient is in the “wayfaring state” and has not departed this life for eternity. However, the Church permits anointing if there is doubt. The pastoral practice is to favor the person and anoint them, provided it is not certain that they are dead. This anointing should be absolute rather than conditional, as in the past. In 1983 the Congregation for Divine Worship, in keeping with this canon in the 1983 Code of Canon Law, deleted the conditional form of anointing from the ritual (“Promulgato Codice,” Notitiae 19 [1983] 551).

My final comments: I think most priests find it very frustrating, and they have no one to blame but themselves, to be called to the visit the dying person and in order not to make that person not feel frightened or to upset even more, some of the family members, he'll insist that the Sacrament of the Anointing of the Sick isn't called the Last Rites anymore, it is now the Sacrament of healing for the person's comfort and we hope they'll get better.

The priest might have been called at 9 PM to the dying person and then after he leaves, the family calls him at 2 AM and wants him back for the Last Rites as the person is on the verge of dying or has already passed.

I now make it abundantly clear that what I am doing, when I am called to a dying person's death bed, is the Last Rites.
Posted by Fr. Allan J. McDonald at Sunday, February 14, 2016

There's a deliberate attempt to make people think that the change from "unction" to "anointing" was caused by VCII. The Latin text of Sacrosanctum Concilium says, "...Extrema Unctio, quae etiam et melius 'Unctio infirmorum' vocari potest..." was then deceptively rendered in English, "Extreme Unction, which may also and more fittingly be called 'anointing of the sick'...".

If "anointing" sounds better than "unction", fine. But they shouldn't make it seem like this change, too, was by mandate of that council. Lying is lying, even if it serves some good purpose.

"Unction" sound like you're giving the cold shoulder to your mother's brother.

"Be not the first by whom the new are tried, nor yet the LAST to lay the old aside."

I am a "so-called post Vatican II Catholic" and I have no aversion to the term. I bet I'll be congratulated by my fellow travelers here on the old blog.....