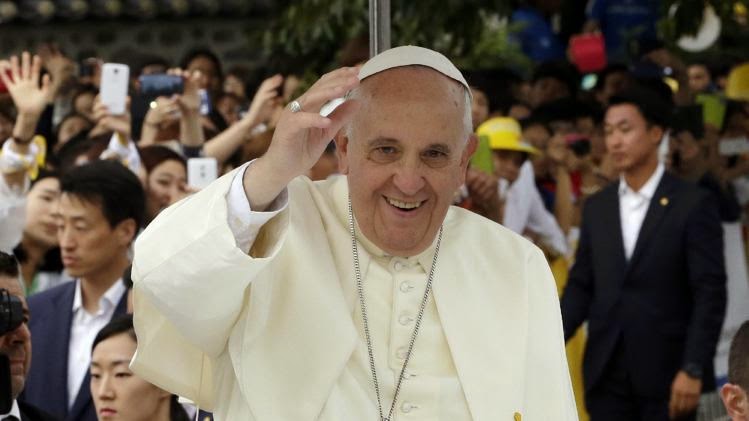 Pope Francis waves to the faithful upon his arrival for the Closing Holy Mass of the 6th Asian Youth Day at Haemi Castle in Haemi, south of Seoul, South Korea, Sunday, Aug. 17, 2014. (AP Photo/Lee Jin-man, Pool)
BUENOS AIRES, Argentina (AP) — Three relatives of Pope Francis died and a fourth was in critical condition Tuesday after their car crash on a provincial highway in Argentina, the Vatican and a local police official said.

The small car carrying a nephew of the pope along with the man's wife and two young children slammed into the back of a truck, said Highway Police Superintendent Jorge Raineri. The crash killed the wife and children, one 2 years old and the other 8 months.

Photos showed the passenger side of the car smashed and crumpled beneath the cargo truck.
Emanuel Bergoglio, the 38-year-old son of a brother of Pope Francis, was hospitalized. He suffered extensive injuries and his condition was not considered stable, said Ignacio Bruno, an assistant director of the hospital in the town of Villa Maria, to Todo Noticias television.

Vatican spokesman the Rev. Federico Lombardi said "the pope was informed about the tragic accident. He is profoundly saddened." He added the pope asks "all who share in his grief to unite with him in prayer."

Carmona was a social worker who specialized in assisting police in helping victims of domestic violence, according Horacio Alberto Gimenez, chief of the Buenos Aires Metropolitan Police. Her husband, the son of the pope's late brother Alberto, is a medical examiner.

The accident occurred between the cities of Rosario and Cordoba, apparently as the family was returning to Buenos Aires following a holiday weekend. The driver of the truck was not injured.

The pope's nephew has undergone surgery and he will be closely monitored over the next 48 hours to evaluate the next steps, the director of the hospital, Francisco Fortuna, told Radio Continental
"He has made good post-operative progress and the hemorrhage, which was the reason for the surgical intervention, has been contained," Fortuna said.
Posted by Fr. Allan J. McDonald at Tuesday, August 19, 2014


As a side note, has anyone else seen the news article by Cardinal Schönborn talking about how we will see "signs and wonders" from Pope Francis? It gave me the chills and also reminds me of a certain bible verse warning the faithful what to look out for.

I have not seen the article but sometimes I wonder if Pope Francis is the pope of the third Fatima secret and not St. John Paul II.

Definitely will pray for all involved

Fr I'm not familiar of the pope in the secret of Fatima. What does it entail?