MY READERS AREN'T GOING TO LIKE THIS CLOWN MASS PHOTO: DISCUSS

The deacon's bench reports a stuck in the 1970's visual! Discuss: 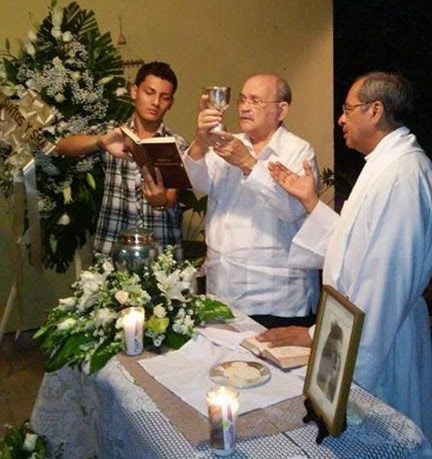 Sandinista priest Miguel D’Escoto Brockmann, a close advisor to President Daniel Ortega, said his first Mass in 29 years this week after Pope Francis reinstated his priestly ministry.
D’Escoto, a Maryknoll priest, was suspended from his priestly duties by Pope John Paul II in 1985 for refusing to renounce his position in the revolutionary Sandinista government. Three decades later, the Sandinista priest wrote a letter to the Vatican asking permission to celebrate Mass again “before dying,” according to the National Catholic Reporter.
D’Escoto, 81, is suffering from failing health. The Nicaragua Dispatch tried to contact D’Escoto this week by phone, but was told by his live-in assistant that he can no longer use the phone due to deafness.
Despite his age, D’Escoto, who continues to hold the honorary title of Foreign Minister, remains an ideological firebrand who doesn’t miss a chance to rail against the U.S. government and Israel. In 2007, D’Escoto was — oddly enough — asked by the government of Muammar Gaddafi to be the Libyan Representative to the UN. A year later, he became the President of the United Nations General Assembly.
Similar to Trappist poet and priest Ernesto Cardenal, who was suspended from the Church at the same time and for the same reasons, at no time in his life did D’Escoto ever cease his political activism. Yet unlike Cardenal, who has shown no interest in being reinstated by the Vatican, D’Escoto asked for a second chance.

So, that is a Mass they are celebrating, is it? LOL! Man, the Church is in deep, deep trouble. Instead of turning flips trying to defend this indefensible Pope, everybody should be in sack cloth and ashes wailing and repenting and begging God to forgive us for the travesty we have made of the Mass and the Church.

Ok, so the server is not properly vested in surplice and cassock, but at least he's male. What else is wrong? Did someone expect this reinstated priest to celebrate his first Mass ad orientem?

It's not the server who's improperly dressed, it's the celebrant. And who's the bint in the photo on the 'altar'?

The operative words are "suffering from failing health". One way or another, liturgical abuse (and/or dissent) comes to an end.

The photo on the altar is a old photo of a young woman, a young looking Lucille Ball, the clown of television comedy!

Hmmm. Sandinistas and Qadaffi? Did he go to confession before he was reinstated? How is this different than any of the American "Catholic" politicians receiving communion? Good eye, John.

Is that really a priest? How can I be sure?

Is this a Mass? How can I tell?

This looks like a funeral Mass, so may the departed Christian rest in the peace of Christ.

It's a shame this poor priest placed temporal affairs before the Sacred Mysteries all these years. May he now humble himself enough for reverent celebrations of the Sacrifice.

Shocked! Shocking is the only word to describe how shocked I am that the Marxist priest who Francis "rehabilitated" would celebrate "Mass" in such a manner.

Just SHOCKING that this priest who said "Jesus Christ speaks through Fidel Castro" would be infested with such clericalism to think that he knows better than the Church and will decide how the Eucharist should be celebrated. I am just so shocked.

Never in a million years would I ever dream that orthodox, traditional, Catholic, Francis would be associated with such as priest. Because Francis is sooooooo orthodox and traditional.

Meanwhile the superior of the Franciscans of the Immaculate is basically imprisoned. How long till we see Francis say "Mass" in just the same way.

God help us all

May Fidel lead you into Paradise.

We could have a caption contest for this pic. My entry:

John Nolan: "It's not the server who's improperly dressed, it's the celebrant."

Don't you recognize the humility that's embodied in a Latin American chasuble. Surely the whole Church knows today that standards of priestly vestiture in liberation theology territory are humble indeed.

But perhaps we should at least expect more of our altar servers, who presumably have not suffered seminary re-education.

But perhaps I'm mistaken in assuming he's a server. Maybe this is a solemn high requiem Mass, and the 3 individuals shown are (left to right) the deacon, celebrant, and subdeacon.

I thought it was the Pope, a Bishop, and a Priest…sheesh!

I'm wondering, if a priest is on vacation, is he required to vest for his private Mass for the day?

Carol:"I'm wondering, if a priest is on vacation, is he required to vest for his private Mass for the day?"

The following paragraph from Redemptoris Sacramentum regarding private celebration with only the priest present, appears to give an affirmative answer (reprobation being the highest degree of censure):

[126.] The abuse is reprobated whereby the sacred ministers celebrate Holy Mass or other rites without sacred vestments or with only a stole over the monastic cowl or the common habit of religious or ordinary clothes, contrary to the prescriptions of the liturgical books, even when there is only one minister participating.

There is provision in the missal for a Mass without a congregation or server. However, there is no provision for omitting the proper vestments. There is, however, an allowance for the celebrant to wear white vestments for any Mass, which makes it easier to pack for travels.

Thanks for the answers!

I figured that would be the case, but I didn't my own assumptions to fill in the blanks for the things that I have never been taught.

I was so distracted by the photo of the woman, I didn't notice before, is that someone's cremains surrounded by the white flowers on the other side of the make-shift alter? Also, the banner on the flowers by the wall says "SANTOS Y SRA" (Saints and Mrs.)? What is that about, or maybe I am not seeing all the letters?

I was tying my best to give this guy the benefit of the doubt, but this all seems a bit weird to me.

That does look like a funeral spray to the left of the altar.