SOME THEOLOGIANS WON'T LIKE THIS: I AM NOT A THEOLOGIAN--POPE FRANCIS' IN FLIGHT INTERVIEW! 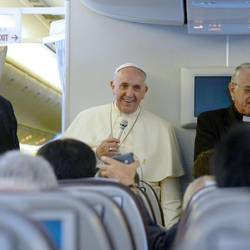 FRANCIS ON THE PAPAL FLIGHT FROM KOREA TO ROME


Francis’ relationship with Benedict XVI
“We see each other. I visited him before I left for Korea. He sent me a text two weeks ago which he wanted my opinion on. We have a normal relationship. Because I don’t think the Pope Emeritus is an exception and perhaps certain theologians don’t like this, but I am not a theologian.  I think the Pope Emeritus is already an institution because we do get old and when one reaches a certain age, one does not have the strength to govern well because the body is too tired ... One’s health may be good but there is no longer the ability to take on all the problems that come with governing the Church. If I didn’t feel I was able to carry on I would do the same. I will pray but think I would do the same. We are brothers and I have already said that because of his wisdom it is like having my grandfather with me. He is a man of wisdom. Speaking to him does me good. And he gives me quite a bit of encouragement.”

Here is the link again:

While I do not think the abdication of Pope Benedict XVI from the throne of Peter was a good thing for the Church as a whole...Neither was the lengthy pontificate of Pope John Paul II for there was a huge cult of personality that equated JPII with the office.

I think we'll see reigns closer to normal (about 8-10 years) rather than the exception of two decades plus...

But as for Pope Francis not being a theologian, while in of itself it isn't a problem (different specialties while studying for the priesthood most certainly)...As Pope, the microscope is on 24/7/365 whether one likes it or not now and days.