MORE SHOCKING AND DEPRESSING AND SCARY NEWS ON THE BLACK MASS! 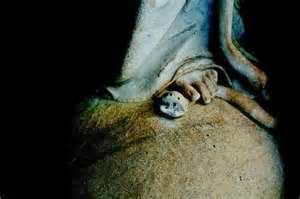 Satanist's Friend Sent Him the Host for the Oklahoma Black Mass

You can read the full story by pressing HERE, the following is an excerpt:

The head of the Oklahoma City satanic church that is planning a black mass in a public venue next month says the Eucharistic Host he plans to use in the ritual was mailed to him by a friend.
" I'm sick of hearing about this 'Consecrated Host,'" Adam Daniels, of the organization, the Dakhma of Angra Mainyu,  wrote in an emailed response to questions from Aleteia. "As my understudy has told other Catholic Inquisitors, the Eucharist was mailed to us by [a] friend. That is all I'm going to say about how it was attained [sic]. My question is, why is a piece of bread that some man said some words over so sacred?"

Archbishop Coakley is calling on Catholics to storm heaven with prayers so that the black mass will be cancelled.


“In spite of repeated requests, there has been no indication that the City intends to prevent this event from taking place,” Archbishop Coakley wrote in a letter to the people of the archdiocese this week. "I have raised my concerns with city officials and pointed out how deeply offensive this proposed sacrilegious act is to Christians and especially to the more than 250,000 Catholics who live in Oklahoma.”

In the letter, dated Aug. 4, the Memorial of St. John Vianney, the archbishop said he is concerned about “dark powers” that the performance of a black mass would invite into the community “and the spiritual danger that this poses to all who are involved in it, directly or indirectly.” Though the event is being promoted merely as “some sort of dark entertainment, this Satanic ritual is deadly serious,” he said. “It is a blasphemous and obscene inversion of the Catholic Mass. Using a consecrated Host obtained illicitly from a Catholic church and desecrating it in the vilest ways imaginable, the practitioners offer it in sacrifice to Satan.”

Making “black masses” open to the public exposes people to serious evil, an exorcist warned in an interview with Aleteia after news of the Oklahoma City event was first known. “You cannot attend such an event—even if one does so merely out of curiosity, and not with any firm desire to worship Satan—without being adversely affected. The mere fact that this black mass in Oklahoma City will be public lends it a certain legitimacy, and I suspect that some people will go simply to be entertained. What they may not realize immediately is that simply by going, they will open themselves to the power of the demonic.”

My comments: Just reading this depressing report and what this Satanist said has dark, demonic influences. Pray, pray, pray that this man repents and cancels the event.
Posted by Fr. Allan J. McDonald at Wednesday, August 06, 2014

I just did a Google search and read that this deeply misguided and foolish individual holds this event every year in the Civic Center and last year no-one showed up. Let’s hope no-one shows up again, despite all the publicity this year.

I can only imagine what the reaction of Muslims would be if someone tried to do something analogous involving Muhammad.

P.S. I do not know enough about the relevant areas of law to express an informed opinion but I assume the diocesan lawyers are looking at the possibility of seeking an emergency injunction.

I have very little concern over a so-called black mass. My concern is over the abomination the "spirit of Vat II" has made of the true Mass and the refusal of the hierarchy to do anything about it. I wonder which is a truer affront to God's holiness a Satanic black mass, which I doubt God considers a threat and the participants in which are damned by default…as God might flick a bug from his arm (anthropomorphic language, yes), or the horror that is most celebrations of the NO which tempts devout Catholics to sin and reduces the majesty of God and the suffering of Christ to a side show carnival or a sleep-inducing bore.

The Lord of Hosts, The Lord of Creation endured this and worse at the hands of His tormentors for our sake, and recalls it everyday in a Mass every hour of the day. So this is nothing new to Him. We get pretty worked up, and we should, but we need to recall the torment we do to Him with our own hands as believers. Gene is correct that this is inconsequential to The Creator of Everything and he is correct that we edge up to blasphemy in our casual approach and lack of respect shown in our sloppy execution of Mass.

But I would really, really, like 30 seconds with that son of a bitch.

RCG, I don't think it would take you thirty seconds. LOL!

"I'm sick of hearing about this 'Consecrated Host,'" Adam Daniels, of the organization, the Dakhma of Angra Mainyu, wrote in an emailed response to questions from Aleteia. " . . . . . My question is, why is a piece of bread that some man said some words over so sacred?"

Is not a "genuine" Black Mass based on actual belief in the real Mass--to the extent of believing that a validly consecrated Host is indeed sacred, that it actually contains the Body and Blood of Christ,and therefore capable of desecration of His Real Presence?

If so, do this guy's frivolous remarks suggest that this whole thing is just adolescent acting out, hardly more than a PR stunt, some kind of play-acting lark? If he doesn't really believe in Christ, how can he really hate Him? Does he then really believe in a Satan whose powers he can invoke against Christ?

Even if he's "merely" showing contempt for and further diminishing the credibility of the Catholic Church, and demonstrating its already dissipated public influence. Which is bad enough, even if this idiot has no clue what a real Black Mass is or entails.

The Satanist's question, " why is a piece of bread that some man said some words over so sacred?" begs a response. Satan knows it is the Body and Blood of Christ. He does not need faith to believe this since he exists beyond the realm where faith is necessary.The satanists know this otherwise also why not use an unconsecrated host or one from a protestant service (which is also untransubstantiated) both of which would also be easier to procure.
There is hope. A black mass which was scheduled earlier this year in Boston was called off. The Harvard student club that was sponsoring The Satanic Temple's Black Mass on campus pulled their support and canceled the event.

Henry, The Father of Lies would not speak the Truth you explain. He would validate God and His Church. He must destroy Faith and give the hope that there is no God and no sin for people to follow him consciously. So this useful idiot may actually believe he is only mocking superstition without understanding that even for secularists evil real.

Gene, ever the moderate, has a point.

Please sign your protest against the Black Mass in Oklahoma here:
http://www.tfpstudentaction.org/stop-black-mass-oklahoma-city.html

John, I did not even know they were rioting in Oklahoma...