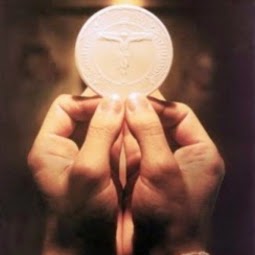 I reprint the following from the National Catholic Register. The only comments I have, apart from being overjoyed that the local Church there has been sucessful in having the Satanist "Mass" canceled is the following. Will the archbishop or his office investigate the manner in which this Satanist stole the Sacred Host from a Catholic Church. Did this Satanist receive the host in the palm of his hand and simply walk out with it.

There isn't a church in my diocese or any other diocese in the world where the consecrated host hasn't been taken by someone. Apart from Satanic purposes, the worse case scenario is that it is taken home and the one who took it is oblivious to Who is there. They either place the Blessed Sacrament somewhere and forget it about it or throw the Blessed Sacrament in the garbage not intending any sacrilege.

The more common problem is they discard the Sacred Host in the church either on the floor near their pew or in a hymnal or missalette. We have discovered this even at St. Joseph--and many times!

We have also been informed by members of the congregation that some share the host with their young children or others in their family, like a Snack! Other members of the Church on seeing someone walking away with the Host approach them and either ask for it or demand that they consume the Host.

The worst case scenario is that a Satanist takes it. I know for a fact that it happened in my previous parish in Augusta.

While receiving exclusively on the tongue would not prevent this intentional or unintentional sacrilege altogether, especially for a determined Satanist, it would cut down almost completely the other forms of desecration I mention!

The organizer of a Sept. 21 black mass surrendered the consecrated Host, one day after the Archdiocese of Oklahoma City filed a lawsuit for its recovery.

OKLAHOMA CITY — Oklahoma City's archbishop voiced relief that Satanists organizing a "black mass" in the city returned a stolen host that was to be desecrated, but restated his concern that the event should happen at all.

The host was given to a priest Aug. 21 by an attorney representing Adam Daniels, who organized the black mass.

“I am relieved that we have been able to secure the return of the sacred Host and that we have prevented its desecration as part of a planned Satanic ritual,” Archbishop Paul Coakley said Aug. 21.
“I remain concerned about the dark powers that this Satanic worship invites into our community and the spiritual danger that this poses to all who are involved in it, directly or indirectly.”

The occult group Dakhma of Angra Mainyu has scheduled a black mass at the Oklahoma City Civic Center Music Hall Sept. 21. A black mass is a sacrilegious ceremony that invokes Satan and mocks the Mass, involving the desecration of the Eucharist, generally by stealing a consecrated Host from a Catholic church and using it in a profane, sexual ritual.

Daniels had said that, as far as he knew, the host was consecrated and that it had been “mailed to us by [a] friend.”

His decision to return the host quickly followed upon the Aug. 20 filing of a lawsuit on behalf of the archdiocese, charging that the host had been stolen from the Church.

The archbishop has repeatedly asked that civic leaders cancel the event.

In July, an official with the music hall defended the decision to permit the black mass there, citing the hall’s neutrality policy.

She told EWTN News that as long as no laws were broken during the event itself, the city hall was not concerned with whether laws may be broken in obtaining a consecrated Host ahead of time. She said that similar events scheduled in previous years had poor or no attendance.

“I have raised my concerns,” Archbishop Coakley said, “and pointed out how deeply offensive this proposed sacrilegious act is to Christians, and especially to the more than 250,000 Catholics who live in Oklahoma.”

The archbishop has asked that every parish add the well-known prayer to St. Michael the Archangel at the end of every Mass from Aug. 6, the feast of the Transfiguration, through Sept. 29, the feast of the Archangels. He has also asked each parish to hold a Holy Hour with Benediction from Aug. 15, the Solemnity of the Assumption of the Blessed Virgin Mary, through Sept. 21.

The archbishop will hold a Holy Hour, a Eucharistic procession and Benediction at Oklahoma City’s St. Francis of Assisi Parish at 3pm Sept. 21, the same day the Satanic event is scheduled to take place.
Tulsa’s Bishop Edward Slattery and Bishop Carl Kemme of Wichita have also called on the faithful to respond to the threatened desecration with their prayers.

A similar black mass scheduled by Harvard Extension School’s Cultural Studies Club in May was “postponed indefinitely” amid protest among students and the local community.

Asked about the lawsuit and the stolen host, the civic center’s public information manager, Jennifer Lindsey-McClintock, said the facility is “glad to see that the archbishop and Mr. Adams have come to an agreement on the matter of the host.”

However, she contended, “Any decision to cancel the event itself would have to come from Mr. Adams directly. As we have previously stated, as a government-operated facility, we cannot deny rental space to any group based upon the content of their message. This includes the cancellation of any event already booked in our facility.”

Lindsey-McClintock did not respond to CNA’s questions regarding the stealing of a consecrated Host being necessary for a black mass to occur.

Great news! Thank you St. Michael and thanks to the bishop who refused to allow sacrilege to take place without a fight.

I’ve never been able to understand how a pastor, one who actually believes in the Real Presence, can reconcile his obligation as a priest--to protect the sanctity of the Blessed Sacrament—with the distribution of Holy Communion in a way that invites sacrilege. In today’s Church priests admittedly are under much pressure to do or tolerate things they don’t think are right. But if you don’t draw the line at protecting the Blessed Sacrament, where are you going to draw it? Does a priest who believes have no freedom to follow the dictates of his beliefs? Is this where the Church is now—where conscience must be ignored, in order to go along to get along?

This is the best of news. It also shows us how this kind of thing can be fought. As in the filing of a lawsuit as was done here, to recover stolen Church property.

This is very happy and cool news. I also pray the Satanist was moved in a way to save himself. Would love get one back from Ole Scratch.

Communion on the tongue does not "protect the sanctity of the Blessed Sacrament"...unless each person stands in front of the priest until he or she swallows the host and then opens the mouth for an inspection...like inmates in prison do when they are given medications.

Latin Mass ad orientem and kneeling for communion on the tongue won't rid the world of sin and evil.

How do we know that this isn't just unconsecrated altar bread? Unconsecrated hosts can be purchased in most Catholic supply stores or online.

I believe communion on the tongue and kneeling at a railing would cut back on unintended desecration dramatically. Every Sunday we have visitors who are not Catholic but don't read the disclaimer in our missalette about who is eligible for Holy Communion. Nothing knowing that they are not to come and receive, they think they should do what everyone else is doing. So they come forward. I suspect they watch some people but not very closely in terms of how to receive. Once they receive in the hand, they walk off without placing the host in their mouth and either place the Host in their pocket, missalette or floor or bring it home. The same with smaller children. kneeling at the railing and receiving on the tongue would reduce this. I suspect most people once they place a Food or food item in their mouth would not then spit it out in public or take it out with their hand. Also, Catholics who kneel at a railing don't get up immediately once Holy Communion is given if the priest is the one doing the processing at the railing, so their is time to allow the Host to begin to dissolve.

Robert Kumpel:
Good point. I do know there are orders of nuns who make the
unconsecrated bread which they don't (as far as I know)sell on the open market. The unconsecrated wafers are different depending on where they come from. You would have to contact the Diocese of Oklahoma City to find out about they were sure about this.

The following appeared in the Notitiae, April 1999: "...ordinary and extraordinary ministers should take care in a particular way that the host is consumed at once by Christ's faithful, so that no one goes away with the Eucharistic species in his hand... The celebrant priest, if there is a present danger of sacrilege, should not give the faithful communion in the hand..."

Fr JBS, I have a priest friend who did just that (stopped Hand Communion) as some profanations were happening at his parish...he ended up getting called in for "sensitivity training" ...but he remained steadfast and most people at his parish now receive kneeling and on the tongue.

So...JBS, if the communicant doesn't consume the host quickly enough to satisfy the priest or communion minister, what should he (or, "gasp", SHE) do...call out for them to stop...tackle them...what?

How does the priest tell if "there is a present danger of sacrilege"?

Yikes, Joe P...the Communion Nazi. Maybe the priest should wear camo and combat boots and a sidearm...just to let the da*ned heathens know who's in charge.

The notice doesn't indicate a course of action in response to the situation you describe.

It's unfortunate that you call priests Nazis. Do you know much about the Nazi Party or the things they did in Europe? I think if you did, I think you would not use this term so freely. I advise you to watch Schindler's List or The Pawnbrocker, in case you prefer not to read books.

God loves us and wants us to love each other. If you allow yourself to experience this love, I think you'll find yourself becoming less hateful, more understanding of others, and more convincing in your arguments.

JBS... My reference was to a Jerry Seinfeld character called the "Soup Nazi". It's humor...
You obviously didn't get it.

I lived through WWII. My two brothers fought in it. I learned about it from live radio broadcasts, newsreels, serving funeral Masses for people I knew who were killed. I didn't learn about it only from books and movies made years later. I did read the book and see the movie you mentioned though.

Peace be with you.