Eternal Rest grant unto him O Lord and may perpetual light shine upon him. 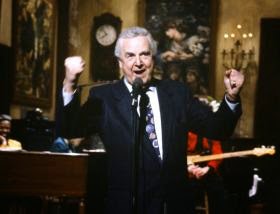 My father bought our first television set in Atlanta, Ga around 1957 or 58. As a child of four or so I just couldn't get over this really groovy invention and remained clued to the set as long as my father would allow it to be on, except of course for the boring news and God forbid, Meet the Press! My father was concerned that watching TV would ruin my eyes. He was right!

Today we learn that Don Pardo, known as Dandy Don Pardon to us baby boomers died. He was 96 years old and had continued to be the voice of Saturday Night Live through the last season! Most people would recall his voice on Saturday Night Live. He had a great voice and I loved it as a child.

But I knew Dandy Don Pardo from one of my favorite game shows of the 1950's which had both a day time and night time version and that was the original Price is Right with Bill Cullen. There was something about Don Pardo's voice that I absolutely loved as a child. He worked for NBC since 1940!

Just as an aside, the night time version of Bill Cullen's Price is Right was in color even in the late 1950's as NBC was a pioneer in producing color shows even then. The NBC Peacock would come on before any "Brought to you in living color by NBC" show began. I could not figure out what was the difference between "living color" shows and others that weren't since we had a black and white TV. I am still confused about the difference.

Here's a black and white (or in living color on our black and white tv) Price is Right with Bill Cullen and Dandy Don Pardo announcing! Oh, the nostalgia! As a child, because of my ruined eyes, I wore glasses and many said I could pass for Bill Cullen's son!

Since I'm younger than you, my earliest memory of Don Pardo was as the voice-over man on the original Jeopardy with Art Fleming. That show as far more interesting than the sanitized/valium version we see today with Alex Trebek.

Don Pardo must have had a great sense of humor, because he would do anything. Besides Saturday Night Live, he also worked live with Frank Zappa once, introducing songs--not that I'm recommending Frank Zappa.

I also have fond memories of Don Pardo on the original Jeopardy with Art Fleming, especially when Art would always introduce the "Potent Potables" category as Don Pardo's favorite.

I always enjoyed watching the original Jeopardy with my 70+ year old grandmother. She was a lot sharper with the questions than her twelve year old grandson.

I agree that the low-tech, low-dollar original Jeopardy beats the current version by a country mile.

Robert,
I believe he also was the announcer on some of the old Clearasil commercials.

As to Frank Zappa--c'mon don'cha just love "She was the daughter of a wealthy Florentine pogen . . She drove around in a 1959 Morgan . ." Or what about "Petrified Penguin" or "At St. Alphonso's Pancake Breakfast"?

Someone once told me that Frank Zappa was the son of Mr. Greenjeans from Captain Kangaroo. Is that true?