THE MORAL VOICE OF THE POPE 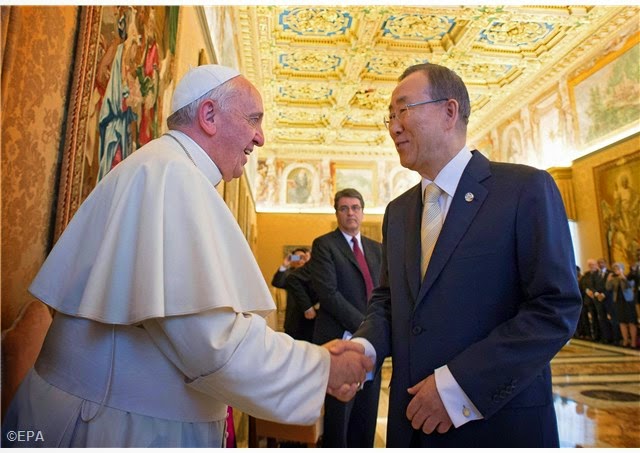 (Vatican Radio) Pope Francis has written to the Secretary-General of the United Nations, Ban Ki-moon, regarding the situation in Iraq. Dated August 9, and released today (Wednesday, Aug 13), the letter condemns the violent persecutions underway in the country, and calls on the international community to act swiftly and decisively to stop the humanitarian disaster currently taking place. "The violent attacks that are sweeping across Northern Iraq," writes Pope Francis, "cannot but awaken the consciences of all men and women of goodwill to concrete acts of solidarity by protecting those affected or threatened by violence and assuring the necessary and urgent assistance for the many displaced people as well as their safe return to their cities and their homes."

It is with a heavy and anguished heart that I have been following the dramatic events of these past few days in Northern Iraq where Christians and other religious minorities have been forced to flee from their homes and witness the destruction of their places of worship and religious patrimony. Moved by their plight, I have asked His Eminence Cardinal Fernando Filoni, Prefect of the Congregation for the Evangelization of Peoples, who served as the Representative of my predecessors, Pope St John Paul II and Pope Benedict XVI, to the people in Iraq, to manifest my spiritual closeness and to express my concern, and that of the entire Catholic Church, for the intolerable suffering of those who only wish to live in peace, harmony and freedom in the land of their forefathers.

In the same spirit, I write to you, Mr Secretary-General, and place before you the tears, the suffering and the heartfelt cries of despair of Christians and other religious minorities of the beloved land of Iraq. In renewing my urgent appeal to the international community to take action to end the humanitarian tragedy now underway, I encourage all the competent organs of the United Nations, in particular those responsible for security, peace, humanitarian law and assistance to refugees, to continue their efforts in accordance with the Preamble and relevant Articles of the United Nations Charter.

The violent attacks that are sweeping across Northern Iraq cannot but awaken the consciences of all men and women of goodwill to concrete acts of solidarity by protecting those affected or threatened by violence and assuring the necessary and urgent assistance for the many displaced people as well as their safe return to their cities and their homes. The tragic experiences of the Twentieth Century, and the most basic understanding of human dignity, compels the international community, particularly through the norms and mechanisms of international law, to do all that it can to stop and to prevent further systematic violence against ethnic and religious minorities.

Confident that my appeal, which I unite with those of the Oriental Patriarchs and other religious leaders, will meet with a positive reply, I take this opportunity to renew to your Excellency the assurances of my highest consideration.

Why doesn't Pope Francis show is concern and go over there and comfort those people. He should be over there right now.

The First (and only successful) Crusade was called in 1094 in similar circumstances when a new Muslim tribe took over the Holy land and annulled what had been a centuries old status quo of allowing unarmed pilgrims free access to the holy sites. Similar massacres took place shocking the sensibilities of Europe and stoking the wars that would rage off and on for the next 400 years.

Our handicap as Americans is our ideological polarization where we tend to root for tribe over topic.

Thus when Bill Clinton was bombing Iraq it was a-OK and justified. No peace movement existed. But when Bush bombed Iraq a peace movement instantly appeared (and curiously was full of the usual suspects that make up the democratic party). How much of the genuine peace movement as we know it is merely a get out the vote machine vs. a sincere, philosophically or theologically driven antagonism to military solutions is a mystery we'll probably never know. Maybe many of the individuals themselves don't know.

What's obvious is that once Bush was gone, bombs still got dropped on civilians but there were no longer any body counts on the nightly news, no longer any "grim milestones" of 1000, 2000, or 3000 casualties. No more street protests against drones or the Patriot Act.

The shame is that this tendency to think of which domestic tribe benefits first and foremost can blind especially us Catholics to the bigger picture.

In the Middle East the tribes were either for the use of force or against it. No one talked about evangelizing the Muslims - to actually convert them! No one talked about strengthening the religious minority groups, finding them safe havens, protecting them from sectarian violence and the various civil wars. They were largely kept unarmed throughout the entire Iraq war.

Neither the Democratic nor Republican parties are run for the good of the Catholic Church - we might occasionally align on this or that topic but it's accidental. "Helping the Poor" via massive Government bureaucratic wealth transfers sounds nice, seems nice, and since it takes place in our big cities where lots of democratic Catholics live I suppose it makes sense....but the results are not more Christians but less. Not a reduction in poverty but an institutionalization of poverty as an industry! Far from aiding the Church's efforts, it supplants it. Now the poor owe more allegiance to the State than the Church or private sector.

Ditto with law and order for Republicans... in the name of fighting a war on drugs the state has amassed an awesome police state apparatus that can be used against any group.

So we ought to be very careful in our tribalism and rah rah tendency to think first as partisans than as Catholics when it comes to this current Iraq mess.

We must stop ISIS (as no one else in the world can). But we must also arm and empower those minorities so such genocides can't easily happen in the future. If we treat them like our inner city poor they will be perpetually vulnerable to handouts and thus perpetually exposed to extortion, manipulation, and indeed, loss of their faith.

Wow, Anonymous, very much to the point. Thanks.

Anon 20140813 09:20 excellent points. I would add one final point: we are often asked, as Believers, to show how belief makes anything better. Here, then, is the world in non-belief. The Lord God wants us to make choices and be responsible for what we do. When we abdicate responsibility to the state we get the disasters that are welling up around us. In our spiritual lives there is a tendency to think we can wash ourselves clean with an external act. Rather, the acceptance of responsibility for ourselves and our actions leads to good acts and contrition and salvation. When we hand it off, we get clown Masses and persecution. People say the world fears a person who thinks for themselves. But they really what you on a path away from faith and to thinking influenced by the world and eventually thinking just like the world. What they really fear is a person who accepts responsibility for his own actions because to do that you must stand apart.

"The position of the American President Obama to only give military assistance to protect Erbil is disappointing," Sako wrote. "The Americans are not up to a rapid solution to give hope specifically as they are not going to attack ISIS in Mosul and in the Nineveh plain."There is no strategy to dry up the sources of manpower and the resources of these Islamic terrorists."

Archbishop Silvano Tomasi, the Vatican's permanent observer to the United Nations told Vatican Radio that effective military protection should be one of the responses to the situation.

A moral obligation does exist which requires us to help in some way, even militarily. Military action should be shared among as many countries as can be convince to join the effort. It should not be overwhelmingly a US responsibility as it was in the war against Saddam.

let's stop funding them first, dry up the money supply

Indeed, Joe. The US has indiscriminately funded and supplied weapons to our and our allies potential and real enemies for years. This has cut across all administrations and all presidencies. It is ridiculous, unacceptable, and stupid.