AS THE USA (WHO MADE THIS ATROCITY POSSIBLE) AND THE THE UNITED NATIONS AND OTHER WORLD LEADERS STAND BY SAYING AND DOING NOTHING, THE CHRISTIANS IN IRAQ ARE BEING ERADICATED!

AN URGENT SOS FOR HELP. IS ANYONE LISTENING? 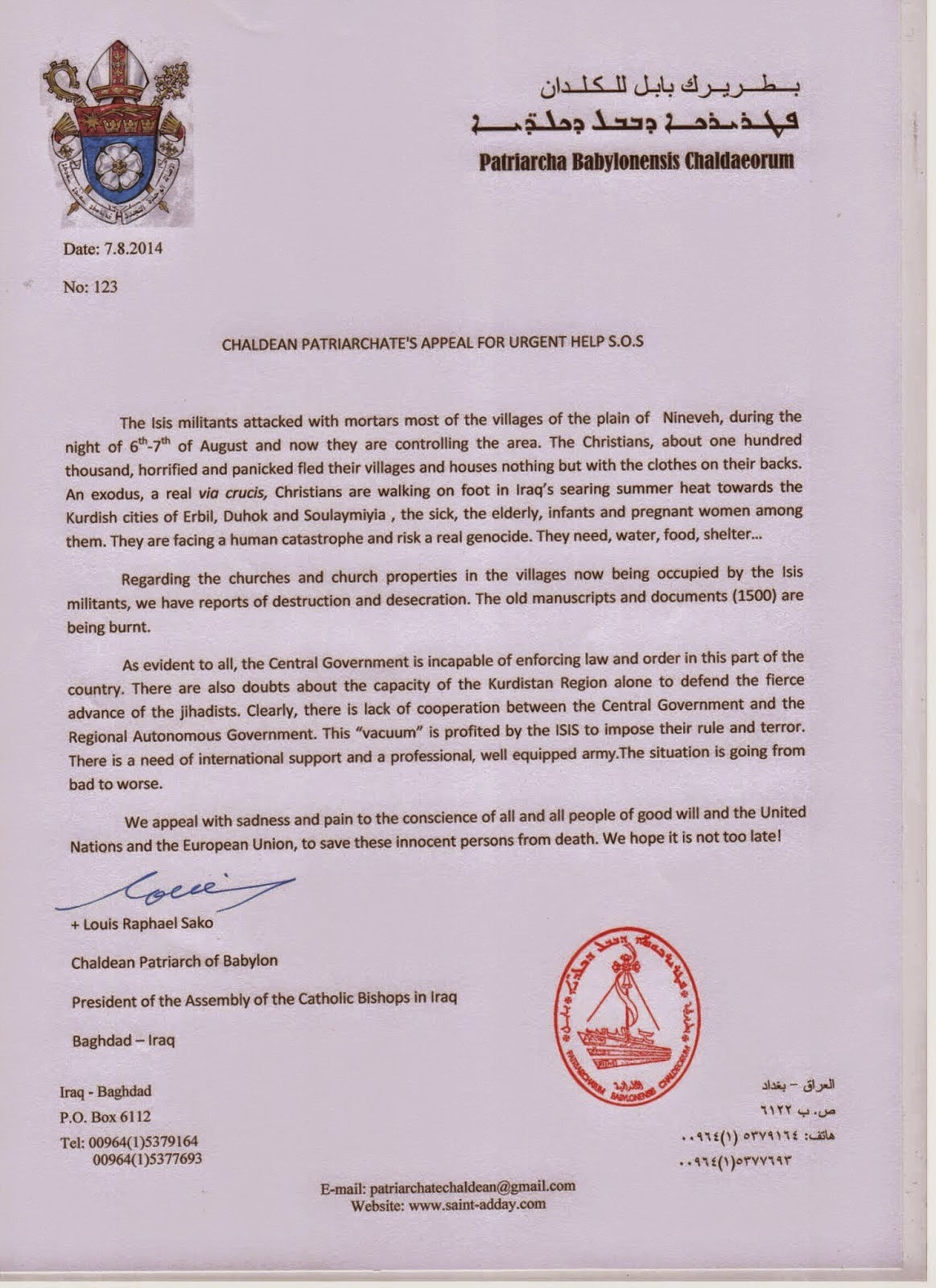 A decade ago the US and UK went into Iraq to topple Saddam Hussein. He was a bad bastard, but his wings had been clipped after his Kuwait adventure, he could only sell his oil under strict conditions, and the north of Iraq was an air exclusion zone policed by NATO. Despite such gestures as writing the Koran in his own blood, he was not an Islamic extremist and protected the Christian minority. His Foreign Minister was a Christian.

The Pax Americana served us well in the Cold War era. However, in the last 20 years and without a clear ideological adversary, US foreign policy is inchoate at best and incompetent at worst. The EU is incapable of formulating any policy whatsoever and its member states have cut their defence budgets to suicidal levels (at least the UK has pledged to increase its spending in real terms after 2015 but it's going to have to fund two large new aircraft carriers plus the very sophisticated escort vessels required; the nuclear deterrent will need updating and decisions cannot be postponed).

I would have thought it to be a moral imperative on the part of the West to throw its military resources into Iraq and give ISIS (who thought of naming these barbarians after a peaceful river in Oxford?) the tent-pegging it so justly deserves. Were I thirty years younger I would be volunteering. Deus vult!

Oh, BTW, the birthmark of Britain on my grandson's thigh has become more defined. There is actually a thin line of light skin about where Hadrian's Wall would be, and one can actually see Land's End. My family agrees that this is quite uncanny. This could have interesting significance...

John is right about US foreign policy, we should be ignored and countries align with us at their own peril. Our policies are based on internal elections and the influence foreign opinion has on them. The emmigration of the Christians will cause an avalanche of instability across the region and wherever they end up settling. We can't help them with adventurism because the same disease is growing here. We would only return home as strangers.

In the week where in Europe we are commemorating the beginning of the Great War (the suicide of Europe) I would not like to give the impression that we Europeans are superior in the arts of diplomacy. Whatever one thinks of Woodrow Wilson, which in the case of Clemenceau was not much, he could at least make the riposte that the old system had failed spectacularly.

The US let its allies down badly over Suez in 1956 (including Israel, mirabile dictu) but this was overshadowed by the importance of the nuclear umbrella during the Cold War. US foreign policy in the 1950s worked for the removal of British and French influence in the Middle East. Ten years later, when the US was tied up in Vietnam and the Soviets took advantage of this to move into the area, US politicians were actually accusing Britain (with some justification) of reneging on her responsibilities. But it's hardly consistent in foreign policy terms.

The US may not have the ecomomic pre-eminence she used to have, but has no rival in the military sphere. No other power in modern history has been dominant on both land and sea. The Soviet challenge was effectively seen off - Ronald Reagan is one of my heroes - and Putin's Russia has to get the French to build its warships and is hardly in the same league.

You need a Bismarck, a Richelieu, a Castlereagh, a Palmerston. Obama and Kerry don't cut the mustard, I'm afraid.

Gene - Wipo, that diachronic chronicler will be reporting from his native Germany on the Pontificalamt and Pontificalvesper as celebrated in the Kaiserdom, Speyer on 15 August. Don't read too much into that birthmark. If Scotland votes for independence a large number of Scots have declared their intention of migrating to England. Just what we wanted to avoid ...(sigh).

PS John...you are sure to be hearing from RCG, that doughty Scot.

Do you know the difference between a bagpipe and an onion?

You cry when you chop up an onion.

John, the USA gave up its economic preeminence to bad economic policy that could be corrected virtually over night. The crippling feature of US foreign policy is the desire of the average American, and every politician, to be liked.

My impression is that the folks who would leave Scotland for England are the only ones working off the welfare debt. Although I would like to have a place on Papa Stronsay or Shetlands.

I believe in my heart Heaven is an English garden. But the kitchen is Italian.

'Purgatory' is a misspelling of 'Piobaireachd'. And shorter.