IS THE CATHOLIC CHURCH, MEANING HER PEOPLE (CLERGY, RELIGIOUS AND LAITY) IN A NEW RELIGIOUS MOVEMENT OR IN A SUPERFICIAL PRAGMATISM AND UTILITARIANISM, GREAT HERESIES OF OUR TIMES? 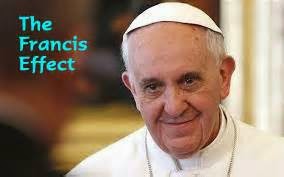 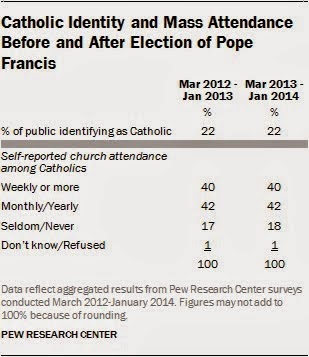 MY COMMENTS FIRST:  To be honest with you, I have not detected a "Francis" effect in my parish or the Diocese of Savannah. I think what was said about Pope St. John Paul II is true of Pope Francis. In St. Pope John Paul II's time, progressives and those who didn't like the Church too much, liked St. Pope John Paul II. It was a personality sort of thing and the strength of his convictions was respected although most who loved him didn't love the Church's teachings on truth. Time Magazine had a cover of Pope John Paul II that had the headline "Pope John Paul II, Superstar." And thus this is the way it is with the cult of celebrity of our day.

We all know that the true test of any religious fervor means that more people are coming to Mass, going to confessions, seeking make sure their marriages are recognized by the Church and are living their faith at home, work and play, in the public square.  There would be more vocations to the priesthood and religious life.

Can we say this is happening today or is the Francis' effect similar to any other celebrity effect, superficial and temporary until a new celebrity arises?

I think there is much, much superficiality in all this popularity especially those who are enamored with Pope Francis. In St. Pope John Paul II's heyday and now in Pope Francis' celebrity it is superficial for the most part. Cardinal Brandmüller in the article/interview I have posted below this video hits the nail on the head when he says the following:

The biggest threat to the church today [is] the absolutism of the individual: "Modernity does not ask: What is true ?, but: What good is it? Is it feasible? Pragmatism and utilitarianism are the great heresies of our time. "

However, don't misunderstand what I am writing. There is some good to celebrity of the popes because their celebrity acts as a giant dragnet of a fisherman. St. Peter pulls in all kinds of people with all kinds of ideologies and perhaps some are good and will remain and convert and others will jump back into the sea on their own accord. Others will remain in the Church and the great and just Judge at their personal judgment will decide who enters the Kingdom of God and who doesn't.

An example of the cult of the celebrity:

And then there is this sober analysis:

Hamburg (kath.net/KNA) Emeritus German Cardinal Walter Brandmüller (85) does not think much of the enthusiasm for Pope Francis: "It is superficial. Were this a religious movement, the churches would be full, "the former president of the Pontifical Committee for Historical Sciences said in an interview with the Hamburg magazine.

Brandmüller opposed the abolition of celibacy and against women priests: "We take concerning faith clear boundaries. This is not a sign of weakness but of strength, "he said. A "laissez-faire, laissez-aller would mean watching passively the devastation of the Church from within," said the 85-year-old.

An ecumenism that unites Protestant and Catholic believers in this doctrine could not exist, because "to be the church in the sense of a purely spiritual greatness of Luther. So Protestantism remains contrary to the Catholic faith. "

The biggest threat to the church today Brandmüller sees the absolutism of the individual: "Modernity does not ask: What is true ?, but: What good is it? Is it feasible? Pragmatism and utilitarianism are the great heresies of our time. "

Unfortunately, the Cardinal's comment is an apt description of Vatican 2 especially its liturgical reform.
The orthodox religious order have priests and sisters. Small Society of Saint Peter parishes have more priestly vocations than the much larger Novus Ordo congregations. Celebrity is created by emotional attachment, faith is a gift of God.

The popularity of Francis was from the start manufactured by the media. The media saw from the start that Francis was a modernist like them. The media's hatred for Pope Benedict and the Catholic Faith merged to form the perfect storm. They painted Bergoglio as a new 1960's version of Saint Francis who was going to do away with 2000 years of Catholic thought and Tradition/tradition for some touchy feely version of the Church. All of the propping up of Bergoglio has nothing to do with him it is done to show the contrast with Pope Benedict. All of it is smoke and mirrors. Ask anyone who really knows the players. And this is NOT an attack on Francis, but an attempt at clarity. Ask anyone who knew or interacted with Pope Benedict and they will tell you that a kinder, more gentle man they never meet. Ask the same people about Francis. Francis is different in private than in public. It's his way or the highway. He doesn't smile and he isn't huggable like he appears in St. Peter's square. Francis' popularity is a fabrication by people who are determined to harm the Church, determined to attack Christ Himself. That's why we have nothing but confusion and chaos from the time that man walked out onto the balcony. Confusion is not of the Holy Spirit.

I have been saying this all along. The Media hated Pope Benedict because he was known to them, had a German background and personality and publicly did not cause people to feel warm fuzzies. Thus they went after him in a negative way and even manipulated what he said in terms of his Islam speech to garner negativity towards him. But they quoted him out of context of course.

The same but in reverse with Pope Francis. He was completely unknown when he became pope, exuded a friendlier public persona (that I think is genuine, but from all accounts in Argentina was a shy, reserved person even publicly compared to what he now does in non-liturgical settings, such as audiences, but he returns to his dower, somber self liturgically.

But Pope Francis is quoted out of context or partially so that the media and others can promote their own agenda. In terms of the video I post there is a young woman who is ga-ga over the pope not condemning homosexuals, but she does not give the context of what he said and it referred to priests with same sex attractions who are earnestly trying to follow the Lord and not promote a gay agenda ideology opposed to the Church, a lobby in that sense would be bad, very bad and that's the pope's words not mine!

The other woman who says there is continuity in JPII, Benedict and Francis hits the nail on the head when one look at everything in context.

Just as one can read Bible quotes out of context to make one's invalid points so do people do the same with popes and what they say, especially with Pope Francis, but what they do is to make him look good in the eyes of the world whereas with Pope Benedict it was to make him look bad, very bad.

The real issue is always local - how do locals view themselves through the lens of their 'daily bread' consumption of media?

Most Catholics don't go to Sunday Mass. Of those who do, how many subscribe to Catholic media? How many read Catholic blogs and the primary sources beyond the headlines and secular spin?

What is the daily bread intellectual consumption of the 10% of each parish that runs the 'institutional' trappings of Church? Our secretaries, administrators, finance, liturgy and stewardship committee chairs... what do they personally do to grow as Catholics? What do they read? What inspires and 'rings their bells'?

I think we can pick our Popes or other figure heads as totems or mascots more than actual leaders... so we FEEL more than THINK about them. If they make us feel good, then we're on their team (or not) while largely ignorant of the details of their magisterium.

I'm still appalled at the relative lack of debate among tribes of Catholics. One of the things I naively thought adult Catholics did was argue among themselves on the merits of this or that socio-political-theological differences. Instead, they largely stay to themselves in echo chambers.

We avoid controversy - and if it happens we beat hasty retreats rather than do the hard work of patient "dialogue" to find or restore at least a common ground.

It's almost as though in the name of growing up, we've all been locked in perpetual adolescence as 12-15 year olds still in highschool!

Let Pope Francis condemn A FORM of capitalism and we get instant tag teams formed and very few people actually basing arguments on the text in question, all while claiming to stand with (or against) the Francis flag.