The Saint Louis Dispatch article below written by Lilly Fowler says it all--its "a throw-back movement." Really? Maybe, maybe not! But I think the last sentence captures the essence of Catholicism:  “There is a saying that the priest does not go to heaven alone,” Altiere said. “My goal as a priest is simply to lead as many souls to heaven as possible.”

This traditional order of priests is in union with their local bishop, not suspended and thus all their sacraments of valid and licit! 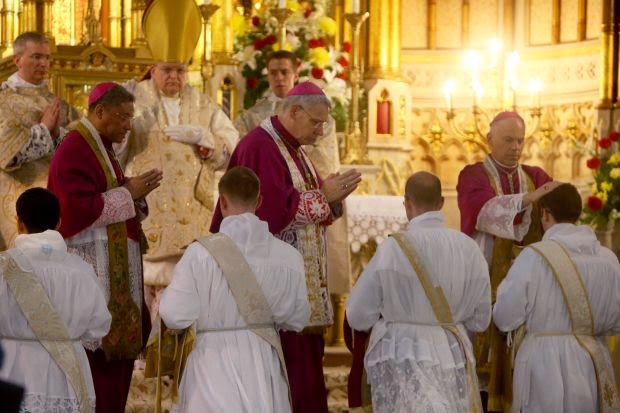 When Pope Francis was first elected, he appeared to the crowd in St. Peter’s Square without the short, red velvet cape known as a mozzetta. Some Roman Catholics immediately cried foul, worried that the pope’s decision to forgo the more formal wear signaled a threat to traditional Catholic worship.
Specifically, they fretted over the fate of the old Latin Mass, now in the hands of a papacy that seemed to shrug off pomp and circumstance.

But more than one year into Francis’ reign, the Tridentine Mass, as it is sometimes called, appears to be alive and well. Decades after the Roman Catholic Church moved away from celebrating Mass in Latin, a throwback movement is growing, in many cases with the young leading the charge.

On Tuesday, four men were ordained into the priesthood at St. Francis de Sales Oratory, the neo-Gothic church in south St. Louis known for practicing the Latin liturgy, for its soaring 300-foot steeple and for its listing on the National Registry of Historic Places.

The Mass marked only the second time members of the Institute of Christ the King Sovereign Priest have been ordained in the United States. The religious community, founded in Africa in 1990, regularly celebrates the old-style Mass, or the extraordinary form of the Roman Rite, as Pope Benedict XVI referred to it.

The last set of U.S. ordinations to the institute was celebrated in 2007 and involved only two deacons. This year’s group was larger, with four men welcomed into the priesthood. Four other men were ordained earlier this year in Italy, where the institute is based.

Former St. Louis Archbishop Raymond Burke, one of the more devoted supporters of the old Latin rite among U.S. bishops, came in from Rome to lead the ordinations.

Mary Kraychy, with the Coalition in Support of Ecclesia Dei, a nonprofit based in Glenview, Ill., that promotes the Latin Mass, says she’s seen a slow but steady rise in the practice, with more than 400 churches offering the liturgy today. The organization sells missals that display the Latin text of the Mass alongside the English translation.

Kraychy describes it as a “youth movement,” with much of the enthusiasm for the rite espoused by those who are too young to remember the Second Vatican Council. In 1969, Pope Paul VI declared that the church should perform Mass in the native language of parishioners, which led to the Tridentine Mass’ being largely replaced.

On Tuesday, Francis Altiere, 32, and three other deacons knelt before Burke, holding candles in their right hands. They prostrated themselves before the altar while Burke knelt with his back to the congregation. The cantors sang the Litany of the Saints, praying to Catholic saints, martyrs and angels for divine protection and assistance.

Altiere is originally from Pennsylvania with a degree from Harvard University. He says his decision to become a priest is owed in part to his discovery of the traditional Latin Mass in a church in downtown Boston.

“At this Mass I really understood the priesthood for the first time,” Altiere said. “The primary reason for the beauty of our churches and liturgical ceremonies is to give glory to God, but it is also such a powerful means of evangelization.”

Those who attend St. Francis de Sales Oratory also say their faith is strengthened by the liturgy and by the feeling of solidarity experienced by those who attend the Mass.

“Everybody here believes what they’re doing is true, real,” said Tom Leith, 55, an engineer in St. Louis. “You’re among people who believe what the church teaches.”

St. Francis de Sales Oratory loyalists say a combination of pacing and visual cues allow even those with little knowledge of Latin to follow the Mass.

Jim Kahre drives 40 minutes with his nine children from High Ridge to visit the church every Sunday.
“I almost get goose bumps,” said Kahre, who works in IT at an accounting firm. “I’ve never seen anything like it until I came here.”

In the 1980s, after the switch to the vernacular, Pope John Paul II allowed priests to celebrate the traditional Latin Mass but only with the consent of local bishops. By 2007, however, Pope Benedict XVI had eased restrictions, giving parishes the authority to celebrate the Mass without obtaining bishops’ permissions.

In 2011, Roman Catholics in the English-speaking world were introduced to a new translation of the Mass that is said to more closely align with the original Latin.

Altiere, for his part, says he will use his new gifts as as priest to not only recite the Mass in Latin but to save souls.

“There is a saying that the priest does not go to heaven alone,” Altiere said. “My goal as a priest is simply to lead as many souls to heaven as possible.”
Posted by Fr. Allan J. McDonald at Wednesday, August 06, 2014

The "Latin Mass", the "Mass in Latin": Fowler makes not even the slightest effort to understand or describe the elements of the old rites that attract these Catholics. As a typical product of post-modern philosophy, all she perceives is cold language, stripped of any content.

It is encouraging to see so many TLM communities proactively reclaiming what is rightfully theirs.

Traditionalists didn't panic about Pope Francis because of his lack of a mozetta. They panicked because of his record. Jesuits from Latin America aren't particularly renowned for their love of tradition. There were conflicting reports that as Archbishop of Buenos Aires, Bergoglio showed little tolerance or solicitude for those wishing to take advantage of Summorum Pontificum.

Since becoming pope, he hasn't exactly assuaged these concerns, especially with remarks like:

"“When I search more thoroughly, I find that it is rather a kind of fashion . And if it is a fashion, therefore it is a matter that does not need that much attention. It is just necessary to show some patience and kindness to people who are addicted to a certain fashion."

So it might behoove us to remember that our pope is simply "being patient" with those addicted to this "certain fashion" until the liturgical re-education folks help them "get their minds right."

The irony in such a label is that the dynamism of the TLM movement comes mainly from young folks who are strictly oriented to the future, and indeed are generally oblivious to the baggage that many of us older folks carry. Vatican II, pro or con, is as irrelevant and shrouded in the distant past as WW I or the Spanish-American War. For better or worse, they don't generally read Vatican II documents or any other musty old Church tomes.

My wife and I often reflect that we, who are--well, let's just say we were Catholics before Vatican saw the light of day--we'd likely not know any young singles and couples with young children at all, were it not for the TLM where we meet them.

Because we see precious few such young folks when we attend a Novus Ordo Mass, where most of the folks are nearer our age and mired in the past, focused backward on the glory days of Vatican II and their own youth.

This Oratory of St. Francis de Sales in St. Louis is a wonderful church.
I had the good fortune of attending a Latin Requiem Mass for All Soul's Day and a Sunday Low Mass in 2012.

Communicants at the altar rail place their hands under a white cloth that runs the length of the rail.
Seems like a good practice that also prevents confusion about how to receive the Eucharist.