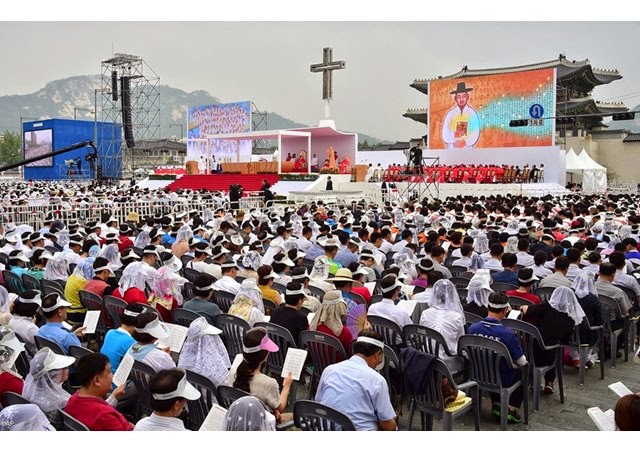 Once again the Koreans are showing the world how to celebrate an outdoor papal Mass with hundreds of thousands of faithful in attendance. It looks like about a million faithful to me.

Please note the beautiful statue of Madonna and child (an image of which seems now to be required at all Pope Francis' Masses and his novelty of including this image in the incensation of the altar). The Korean features of the Child Jesus and His Mother show where "inculturation" works best in the Liturgy.

The choir and congregational singing is stunning. Korean seems to lend itself well to Gregorian Chant. The Gospel is chanted to a Gregorian mode in Korean and it fits well.

The Mass is primarily in Latin with Korean chants. Once again, Latin as the neutral universal language of the Church especially in her liturgy is shown to be of great value in our shrinking world. While those of us who do not speak or understand any word in Korean feel that the Korean leaves us out, not so with the Latin. It should be familiar in some sense to all of us and if we heard it more, especially the fixed parts of the Mass, we would know every word.

I hope Pope Francis or his successor will come to realize the greater that was lost when the lesser of a vernacular liturgy became the norm and almost overnight after Vatican II. Of course Vatican II never envisioned a shrinking world that would become even more fragmented according to ethnicity and language which would be so divisive in the Church both universally and locally. Vatican II never envision instant communication around the globe via the internet and its various services such as Facebook and blogs.

And because of this modern phenomenon, a country priest in the deep south of America, in antebellum Georgia can instantly post a Mass by the pope celebrated 12 hours ahead of Macon in Korea!

The conclusion of the beatification of the Korean Martyrs in general concludes at minute 22:40 and please note the exuberance of the Koreans as the Holy Father concludes his "ex-cathedra" proclamation and the images of the Martyrs are revealed with great fanfare and cheers and applause. I find this the most moving aspect of a Beatification Mass. The Mass continues with the Gloria: