THIS LEFTIST PRIEST RESPECTED HIS SUSPENSION 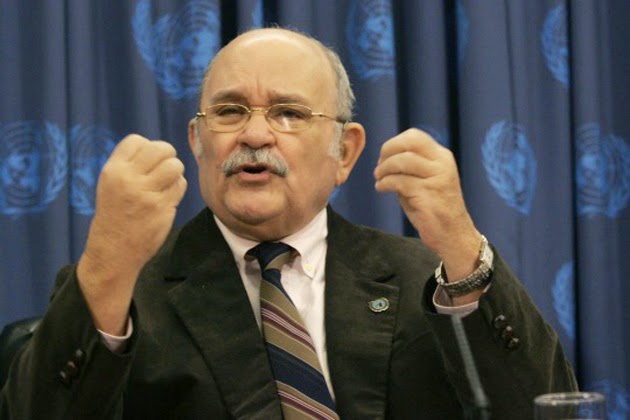 The following is from Vatican Radio, my comments follow:

(Vatican Radio) Pope Francis has granted his approval for lifting of the suspension of Fr Miguel d’Escoto Brockmann from Nicaragua. The 81 year old Maryknoll priest had been suspended “a divinis” in the 1980s for holding political office in the Sandinista government of Nicaragua. Until now, he has accepted the suspension and not engaged in pastoral ministries, although he has remained a member of the missionary society.


Having stepped down from politics some years ago, Fr Brockmann wrote a letter to the Pope, expressing his desire to “celebrate the Holy Eucharist” “before he dies.” Pope Francis responded affirmatively to this request, and has left it to the superior general of the Institute to proceed with the process of reintegrating  Fr Brockmann into the priestly ministry.

My comments: This 81 year old leftist priest suspended by Pope St. John Paul II in the early 1980's evidently respected his suspension and did not celebrate any of the sacraments of the Church as a priest although I presume he attended Mass and remained a Maryknoll priest.

Evidently Fr. Brockmann sees the end in sight (the end of his earthly life) and requested that the pope lift his suspension so that he might celebrate mass as a priest once again.

Compare this leftist, politically active priest who disobeyed Pope St. John Paul II's mandate that priests not be officials in various governments and then obeyed his suspension when he disobeyed the pope in this other area to the SSPX bishops and priests who like Fr. Brockmann were, but still are, suspended.

A suspended priest in the Catholic Church cannot celebrate valid Sacraments of Marriage or the Sacrament of Penance. He could, though, illicitly celebrate a valid Mass. I don't think Fr. Brockmann did this. He respected his suspension. The SSPX don't and feign (mock) both the Sacraments of Matrimony and Penance when they attempt to celebrate these in a state of suspension as the feigned or attempted celebrations of these two sacraments are invalid.

Ay Father, no amount of whitewashing will turn the black into white...

Father, let us not be so overly "ultramontane" regarding this Papacy eh? If we cannot say anything really that is good about the current holder of the keys, the best course of action is silence instead of trying to explain away what is really really obvious.

I'm unsure of the comparison with the Lefebvrists group. Those problematic priests do, at least, prefer sacred ministry over political office, while d’Escoto always preferred political office. In the latter case, true obedience would have been to fulfill his obligations as a priest. At any time he could have given up political life and returned, but instead he's waited until his political career has come to an end.

JBS, true enough and point well taken. However I am approaching this suspension from a canonical point of view. We can quibble about which priests' state in life is more serious, one who continues ministry despite a papal suspension (who never abandoned priestly functions) or the political priest who love politics, (and I presume was religiously motivated) more than specific priestly sacramental ministry.

At least he honored the suspension and did not disobey further a papal decree.

"At least he honored the suspension and did not disobey further a papal decree."

Maybe so, maybe not. But, for sure, he was suspended for disobedience of a papal decree.

He said this yesterday, after his reinstatement:

"The Vatican may silence everyone, then God will make the stones speak, and may the stones spread his message, but He didn't do this, He chose the greatest Latin-American of all time: Fidel Castro," the religious, 81 years old, declared today to Channel 4 in the local [Nicaraguan] television."

"It is through Fidel Castro that the Holy Spirit sends us the message. This message of Jesus, of the need to struggle to establish, firmly and irreversibly, the kingdom of God on this earth, which is his alternative to the empire," he added."

I have coined a new phrase (with apologies to Martin Luther): "The Vati-lonian Captivity of the Church." Perhaps I should tack up what I might call 95 Feces (listing the BS that came from Vat II) on the door of St. Joe's for Fr. to send to Rome. Maybe some modern Eck will come a' beatin' on my door and I can respond appropriately in 5.56 mode.

I apologise for being cynical, but what value is it to celebrate Mass "for old time's sake"? I am not sure he isn't putting one over on Pope Francis, who no doubt understands the politicized clergy better than I. I am emotionally neutral on this having faith that our Pope is doing the right thing.

"…having faith that our Pope is doing the right thing."
You are truly "casting yourself out over 50,000 fathoms" in the Kierkegaardian sense, with your "leap of faith." Good luck with that.

Many of us were laughing at this crap in grad school/seminary back in the 70's while the idiot professors gobbled it up.

where are the fruits of their lives and ministries?

All those social justice Catholics who have spent 40+ years 'serving' the urban poor, promoting various causes... how many souls have they brought to Catholicism by 'attraction'?

The rubber meets the road when one looks at the fruits. Where are the quantitative and qualitative fruits from those, now in their 80s and 70s who spent their entire adult lives promoting various forms of 'progressive' theology and spirituality?