WHIPPING IT UP LITURGICALLY IN MAINZ 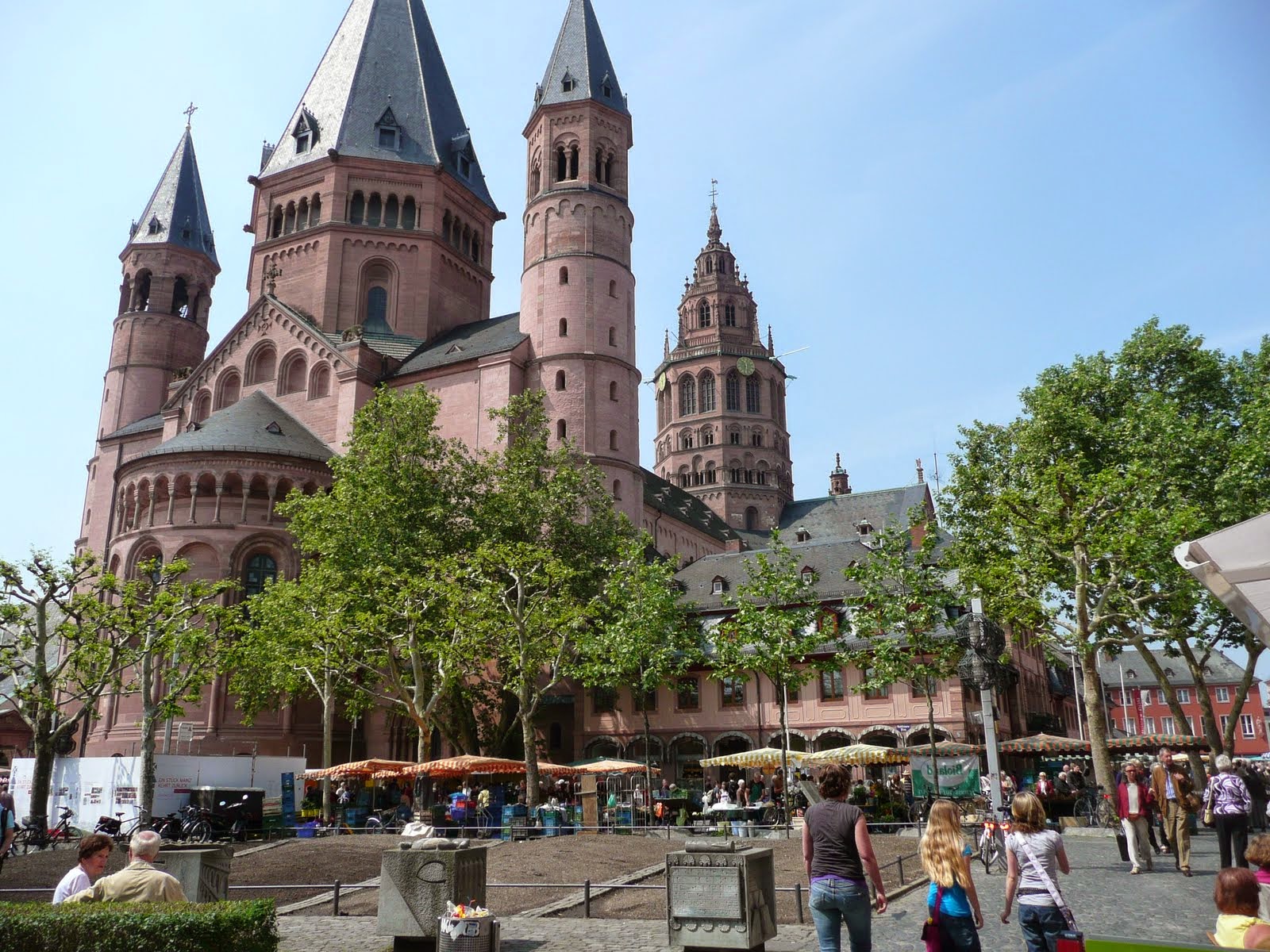 Wipo of Mainz wrote a comment on my post "WHAT IF BISHOPS "THOUGHT OUTSIDE THE BOX" WITH INN...": But I've decided to post it as a post instead, so here it is:
I'm just back from Germany and, as promised, I'll give my impressions of the liturgical situation there - this blog is after all concerned with liturgy, and it is often salutary to look at Catholic worship outside the Anglo-Saxon world.

Since the early 1940s there was widespread use of the vernacular in the liturgy, and both Ordinary and Propers could be sung in German, and metrical hymns often took the place of both. At Low Masses a commentator would recite in German what the priest was saying quietly in Latin, but even at High Mass (Hochamt) vernacular hymns and chants were allowed. It seems strange to us for the congregation to sing a hymn in place of the Gloria and Credo, but it was and is commonplace. Of course before 1964 the priest would have to say the Mass in Latin, so the mass itself was 'complete'.

The Feast of the Assumption is the patronal feast of the Kaiserdom in Speyer, the greatest Romanesque building in the world (although it has had to be rebuilt on more than one occasion since invading French armies had a habit of setting it alight and knocking down chunks of it). The high altar is 21 steps higher than the nave; in the Middle Ages there were three choirs, each with its own altar, one behind the other; nowadays there is a smaller altar six steps up which is used for everyday Masses. The musicians are 12 steps up on the second 'landing'.

The musical resources are outstanding, as is often the case in Germany - a large mixed choir, two junior choirs (one for boys, one for girls), a Gregorian chant schola (the Schola Saliensis) which also specializes in medieval polyphony and has an international reputation, a full orchestra and a magnificent organ which was installed only last year. In August this is scaled down somewhat, but we still had a decent choir and the brass section of the orchestra.

This was a Pontifikalamt at the high altar presided over by the bishop, who wore a splendid Roman-style Marian chasuble. The musical programme was surprisingly English - the Kyrie was by William Lloyd Webber (Andrew's father), the Gloria was by Charles Villiers Stanford, the Sanctus by John Rutter and the Agnus Dei by Christopher Tambling. Elgar's Ave Verum Corpus was sung at the Communion.

The Mass itself was in German, but the bishop sang everything, including the Eucharistic Prayer (Hochgebet). The verses of the Responsorial Psalm were sung to a beautiful melisma by the choir director, and two female singers sang the Alleluia verse in harmony - a recent composition but with nothing of the 'pop' style about it. The deacon began by reciting the Gospel, but when he reached the Magnificat he sang it, in German but to an authentic Gregorian tone.

The Mass ended with a quite lengthy Apostolic indulgence and blessing which the bishop sang in Latin, and then everyone joined in with the Salve Regina. I seemed to be the only one who could sing it from memory, although the Germans don't have the hang-ups with Latin that PI and his ilk seem to have, although German, unlike English, has few Latin cognates.

Last Sunday I attended the evening Mass at the church in Bad Kissingen. There was some singing in the Lutheran chorale style but it was basically a Low Mass in German. The priest ad-libbed a bit but generally stuck to the rubrics. The 'sign of peace' was done in a restrained and sober manner. The middle-aged server was correctly dressed but he was joined by two women when it came to distributing Communion (which, as is usual in continental Europe, was in one kind only). All three were offered the Chalice. This strikes me as an abuse, as it suggests that EMHC are 'different' from ordinary laity. Either offer it to everyone or restrict it to the clergy. That's my two cents' worth.
Posted by Fr. Allan J. McDonald at Thursday, August 21, 2014

Joe don't vest them. That would seem to legitimize them.

I agree with Cameron. It would be an inappropriate liturgical "investment". Once these EMHC's were "fully vested", besides being a temptation to "inflation" of the ego, it might cause an expectation of certain other "dividends". Of course there would be some who could "manage" this without there being a "loss" or "depreciation" of spiritual "capital" or excessive self-"interest". The "risk vs. "return" would not be worth it.

In England and Wales EMHC were seen from the outset as a way of giving a greater liturgical role to women. At the time of their introduction (1980s) women could be lay readers but were not allowed to serve at the altar. At the same time Communion in both kinds became the norm. Having recruited a vast army of EMHC, employment had to be found for them. The Vatican knew full well what was going on, and attempts to reprobate established practice as an abuse in Redemptionis Sacramentum (2004) was a classic case of locking the stable door after the horse had bolted.

An instituted Acolyte is ex officio an Extraordinary Minister of Holy Communion, and in addition is permitted to purify the sacred vessels. However, he must be male, and so there was no way the bishops were going to run with this one. Similarly intinction was discouraged for the clearly stated reason that it would make EMs redundant.

In recent years bishops have issued stricter guidelines but even these are ignored - EMHC still approach the altar before the priest's Communion, still help themselves to the Chalice, still illicitly perform the ablutions and still pour the Precious Blood into the sacrarium after Mass. Most parishes still call them 'Eucharistic Ministers'.

Also, had I been around in Germany in the 1950s (which I wasn't) to have to endure a Vorbeter (commentator) who would have been a bloke in a suit standing on the sanctuary steps reciting the prayers of the Mass while the priest and server muttered to each other in Latin would have been unacceptable. The Liturgical Movement had some good ideas, but some truly awful ones.