IF THE EPISCOPALIANS DO IT AND THEY DON'T HAVE VALID ORDERS OR EVEN BELIEVE IN TRANSUBSTANTIATION, WHY IN THE WORLD AREN'T CATHOLICS DOING IT AS WAS THE 1500 YEAR CUSTOM FOR US IN THE LATIN RITE?

There is a story in the Macon Telegraph this morning about an Episcopal Church in Philadelphia that was on the verge of closing because of disrepair, when lightening struck and completely damaged it allowing for insurance money to pay for its restoration.

Apart from the story, the restoration is beautiful although a modern liturgical awareness imposed on an older building, but in this case done rather well compared to what Catholics did to their older churches in the immediate aftermath of the "spirit" of Vatican II's iconoclasm of our buildings. But I digress.

The point of the pictures below is to show that even in a modern liturgical awareness of how the church should be designed liturgically, one can still have an altar railing and people can still kneel for Holy Communion.

Keep in mind this denomination has female priestesses and bishopessesses. 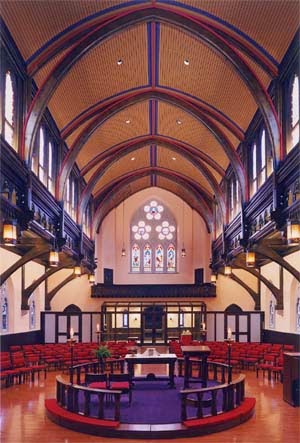 Christ the Bridegroom? Of course sacramental image of Christ as the bridegroom isn't a part of the Episcopal Church's sacramental theology of the priest's masculinity at the Eucharistic celebration nor of the Sacrament of Orders. Of course this image has opened the door to same sex marriage in the Episcopal Church and some Episcopal-oriented Catholics want the same for Catholicism both in female priestesses and same sex marriage. The two walk hand-in-hand, mano-a-mano! 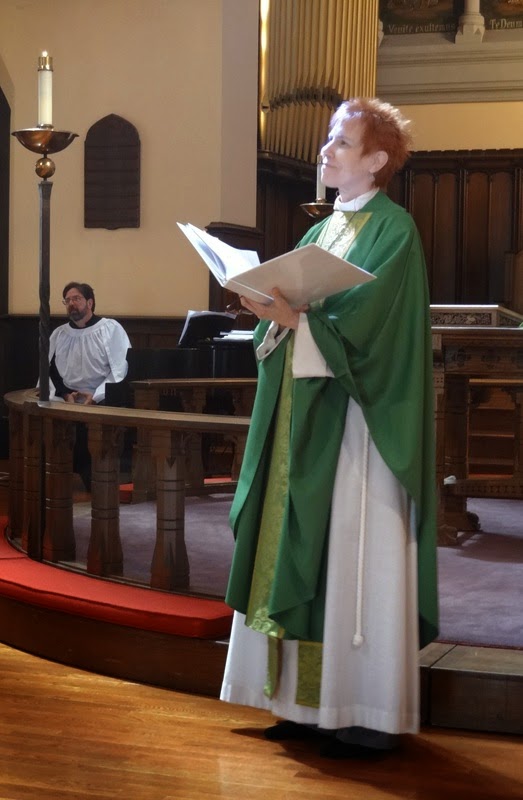 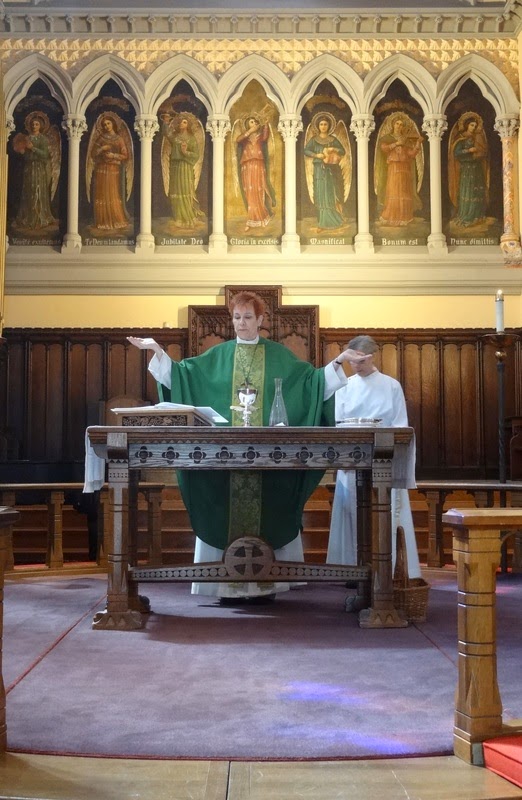 Okay, Episcopalians are showing more reverence for a mere symbol, no where near our true Catholic Mass and thus our true understanding of transubstantiation and yet they are kneeling and more devoutly and piously and unrushedly receiving their mere symbol than we do with the Real Presence. What's wrong with this picture? Compare this to our perfunctory, utilitarian chow-line which is rushed, not reverent looking in the least and called euphemistically a "Communion procession." 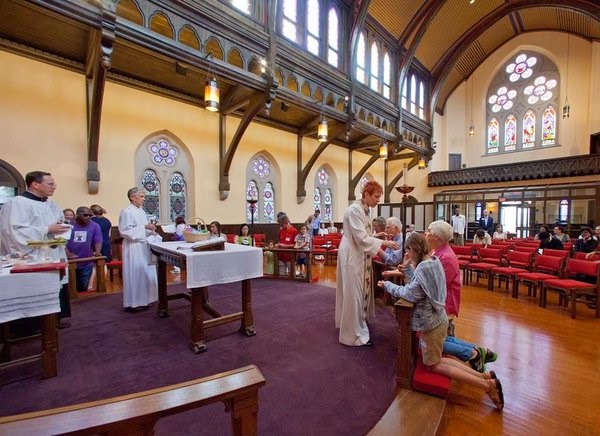 Good insights Father. They are very valid observations. Here are mine.

Yes, the reverence during the Mass must be restored. Communion rails, kneeling, receiving on the tongue do encourage belief in the Real Presence. Even if that was done tomorrow I don't think it will help much, right now.

The main problem with priests today as I see it from the pews is that most of them are not men of prayer or charity. That may seem judgmental but I have my reasons.

Why I see priests totally unprepared for Mass, who didn't prepare a homily or didn't even care enough to fix the missal ribbons for the Mass of the day, and we can tell, I wonder what their lives are like.

Aside from the liturgical abuses of ad libbing almost everything, we the laity can tell when a priest is for real or just going through the motions. Example: When a priest visits the sick in the hospital, in most cases it is just to anoint someone, and when that's over the priest leaves. Protestant ministers that I have witnessed in a hospital actually know their parishioners by name and really enjoy talking with them. And spend time with the souls entrusted to them. They aren't just making a pretense of caring, they really care.

When I have to beg a priest to come and anoint my dying grandmother and he is upset because it's not his day, that tells me the priest doesn't care.

What else is the priest doing?

Almost every duty that priests had has been delegated to lay people.

Priests no longer bring communion to the sick, lay people do.

Priests no longer do wedding rehearsals or teach catechism, lay people do.

The priest in the rectory that is 10 feet from the church building will not put down his breakfast fork to help distribute communion at Mass, he gets the laity to do it.

There may be a lack of vocations but their is an even bigger loss of laity attending Mass. So what is a priest doing that he is so busy?

Protestants may not have the sacraments but they could teach us Catholics much about being charitable people.

I think your evaluation is very noteworthy and true. However, all of us need to keep in mind that most priests trained in the post-Vatican II ecclesiology of lay involvement had the following drilled into us:
1. The laity had to take ownership of the Church, especially on the parish level, thus the need for lay ministers, including Holy Communion Ministers. Keep in mind in the past when only priests could bring Holy Communion to the homebound, it was monthly and monthly only and that is if he was could, he might miss some months. Today the homebound can receive weekly because of Communion Ministers and/or permanent deacons.
2. Lay ministries meant that priests did not pop-in to distribute Holy Communion, which I think is good, because it is not a good liturgical practice to have someone who has not participated in that particular sacrifice to simply come in and do a function. The problem is when there are Ordinary Ministers of Holy Communion at the Mass, such as priests and deacons who hang back so the laity can do it. I think it is also a very poor example for a priest (not on vacation of course) to sit in the congregation during a Mass instead of con-celebrating the Mass or wearing choir garb for Mass and sitting in the sanctuary and thus being available to distribute Holy Communion. It shows a lack of priestly identity.
3. Our sacramental theology has always emphasized Christ in the sacraments. Protestants have emphaisized the pastoral touch. I think there does need to be a better balance, but there is an "inherent" theology in our sacramental system that creates what is perceived as a lack of pastoral sensitivity which Protestant ministers for the most part do not exhibit. The same is true of Protestant hospitality in their churches, visiting, etc, whereas in Catholic Church the focus is on the Real Presence of Christ in the tabernacle not visiting one's neighbor and chatting.

Not awful. Not awful at all. Well done.

I certainly agree that priests should be doing more direct pastoral work, but at the same time I know a lot of priests who are running ragged trying to keep up with their various responsibilities. In the USA, there are only about 2/3 as many priests per Catholic today as there were fifty years ago, and the average age of priests is higher now. This requires some pastoral adjustments.

This is a valid argument against the traditional trappings, Latin, etc: if it is only a facade, if it is only appearances then it means nothing. On the other hand, when we know the Real Presence we treat it with the best and most beautiful we have to offer.

As far as pastoral availability goes the priests should leverage their group time with the parishioners by throwing some compassionate fire and brimstone at them. It seems those sorts of preachers get the fuller churches.

I agree with Father McDonald and JBS:
Lay ministries allow for more participation by the laity in things that they as laity are permitted to do. The laity (at least some of them) want to do things for the Church. The priest(s) cannot possibly take on all the different lay ministries that now exist in many parishes.
There are times they can advise and help out with these things of course. The laity in the Church are the ones being leveraged so that more can be accomplished. There are (or have been)in some parishes situations that have gotten beyond what is prudent, but when it works as it should, it works well.