NEW CONVENT FOR NUNS TO BE BUILT IN NORTH AUGUSTA, SOUTH CAROLINA 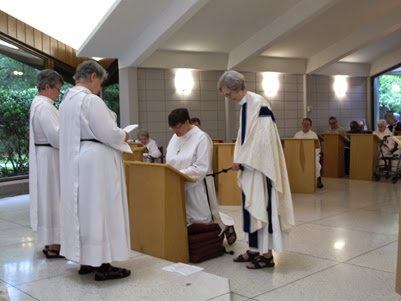 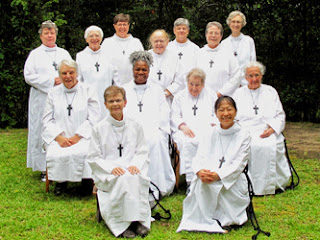 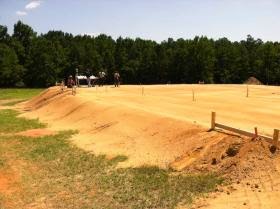 This is the headline in the Augusta Chronicle's religion section this morning on line and it caught my eye to say the least!

New convent to open in North Augusta in 2015

MY COMMENTS FIRST: At first I thought to myself what religious order could do this in the Augusta area? Then I realized it was the Episcopal nuns of Augusta who are moving from their location since 1960 in South Augusta (Georgia) to North Augusta, South Carolina (across the Savannah River from Augusta which is on the state line and all part of the same metro area.

When my father moved us to Augusta in 1960 we lived in South Augusta and became familiar with these Episcopal nuns who had just set up shop. They were called by Catholics as the Protestant nuns. In those days when Augusta had more than 60 nuns of four different orders in Augusta and North Augusta who wore the old fashioned full habits, the Protestant nuns wore a modified habit with a dress that showed more leg and a veil that showed hair. That was shocking back then! Augusta now has about two Catholic sisters left in Augusta and N. Augusta has none (no pun intended). That's it. The Episcopal nuns have 15 and far outnumber the Catholic nuns in metro Augusta!
As a child of 6 and 7 my brother and our friends use to raid their property and enter their barn and play only to have a sister there threaten to call the police if we tresspassed again. (At that time the convent was situated in a beautiful, secluded wooded area with towering pines. Today that area is very developed and the woods are gone!
As fate would have it, when I became pastor of the Church of the Most Holy Trinity in 1991 in downtown Augusta, I discovered that that nun who threatened to call the police on us attended our Saturday vigil each week. She was in her 80's at that point and I thought to myself that this fugitve from justice (me) would be turned in by her and that's why an Episcopal nun was attending our my Catholic Mass. Her name was Sister Clare.
But in reality, she attended my parish because she was fed up with the liberalizing of the Episcopal Church and could not stomach women priestesses of which two of her sister nuns had been ordained. She could not go to their "eucharistic celebrations."

Sister Clare believed in transubstantiation and every dogma and doctrine of the Catholic Church. Around 1998 I ask Bishop Kevin Boland if he would allow her to receive Holy Communion due to her circumstances. She was open to doing so with the Bishop's approval. And Bishop Boland granted it.

By 2002 or so, Sister Clare now in her 90's decided to enter the full communion of the Church officially although she had already done so "unofficially." We were concerned that the Protestant nuns would kick her out of their convent which they certainly had a right to do. But they chose to allow her to stay even in her "irregular" situation with them. She died at the age of 102 and I returned to Most Holy Trinity to celebrate her Requiem Mass  at which her Protestant sisters all 12 of them at the time attended wearing their new white full habit, a modified white Dominican-looking habit without veil. A couple of them were priestesses.

So here is the news article from the Augusta Chronicle this morning:
By Lisa Kaylor
Staff Writer

Ground has been broken for a new convent for the sisters of the Order of Saint Helena, three years after 28 acres was bought in North Augusta.

Construction began in late June on the new convent in North Augusta for the sisters of the Order of St Helena. The land is in Savannah Barony and will be convenient to Interstate 20 while still providing a tranquil retreat.


The new convent will feature a 21,500-square-foot main building with a chapel, dining area, meeting rooms, main kitchen, cloister and rooms for the sisters.

Two or three smaller cottages will also be built on the property, plus a guest house.
If all goes as planned, the sisters will move in next fall.
“We’re very, very excited,” said Sister Ellen Francis.

The Order of St. Helena was founded in 1945 in Versailles, Ky. Some of the sisters moved to Augusta in 1960 and lived in a small log cabin that still stands on the campus of Augusta Technical College.

They were invited to the area by the Episcopal bishop in Georgia to be a praying and spiritual presence in Augusta, Ellen Francis said.

A few years later, they built the facility on Eagle Drive. It was renovated about 15 years ago.

At one time, sisters of the order lived in New York, Seattle, Augusta and other locations, but in 2008, they consolidated and all 14 sisters came to Augusta.

“We never expected this to be our main convent,” Ellen Francis said.

Many of the sisters moved into the guest house, which meant for a time the convent couldn’t rent it to those seeking a spiritual retreat.

They bought two houses in the surrounding neighborhood and were able to reopen the guest house, which is a source of income, but, more importantly, fulfills a central part of the order’s mission to provide hospitality.

Ellen Francis said several things factored into the decision to move all the sisters to Augusta. One was the cheaper cost of living, but another was that there are fewer Episcopal religious communities in Augusta than there were in New York, where the sisters lived in another large house.

“We are the only Episcopal religious order in the Southeast,” she said. “It gave us a place to come where we could have kind of a special mission.”

The sisters – there are now 15, two in nursing homes and one who travels to and from Ghana – are involved in missions throughout the community. Ellen Francis, for example, paints icons and is involved in the Interfaith Fellowship of Augusta.

The new location, near Interstate 20 at Exit 1 off Martintown Road, is convenient for visitors and the sisters’ various missions in the community, while still maintaining the peaceful retreat. Ellen Francis said that while the move won’t affect the work the sisters are doing in the Augusta area, she hopes to make new friends and reach out to other religious communities in South Carolina, too.

Construction is expected to take about a year, and the sisters hope to move in the fall of 2015.

The current property has been listed for sale, she said.

The new buildings were designed by Cheatham, Fletcher and Scott and will be built by R.W. Allen.

“It’s going to be a very special design. We hope it will be beautiful and welcoming,” Ellen Francis said.
Posted by Fr. Allan J. McDonald at Saturday, August 23, 2014

You're Sr. Clare story is fascinating!

I wonder when our estranged Anglican brethren will allow men to become nuns. Surely the reasons for doing so follow from their other liberalizing decisions.

are they single? Celebrate? Why?

JBS I guess you are saying it tongue in cheek. But I assure you somewhere in the pit of hell it is being discussed and Screwtape will be sending a message to Wormwood soon enough and it will be passed to an Anglican Bishop is short order.

RCG, for the most part single. Celebrate, seriously. Probably active lesbians. Anglican clergy and religious are not under the same discipline as our Catholic brothers and sisters. We even allow active homosexuals in the clergy....some even prefer them. It is getting harder and harder for Orthodox Anglicans, ie still hold to the Christian faith, to get into Episcopal seminaries.

It would do the Church to learn more about the various jurisdictions of Anglicanism. Outside of the CoE, the Episkies there are millions of faithful Christians who are Anglican. In the States look for continuing Churches or the ACNA. They are ignored by the Church. With a little leg work the Church can find good allies in Anglicanism.