NOW THAT THE POPULACE AND POST-CATHOLICS ARE REALIZING THAT POPE FRANCIS IS CATHOLIC, WILL THAT TOPPLE HIS POPULARITY? 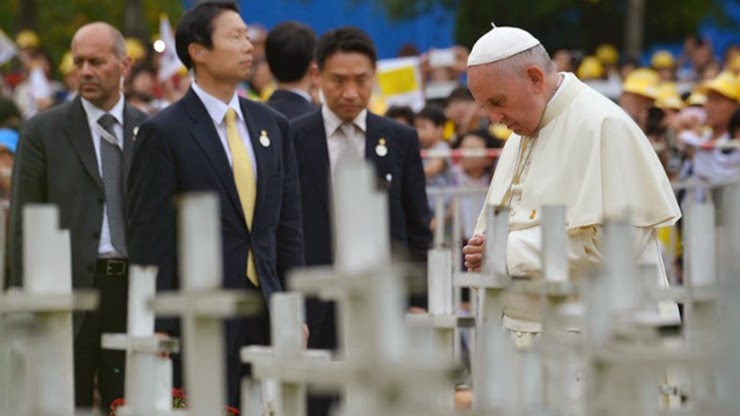 The secular press and post-Catholic commentaries have worked mightily hard to spin Pope Francis' in their direction in order to gain more support for abortion, same sex marriage and contraception, all of which are related.

I'm not sure if they are doing it on purpose or simply are stupid and think that Pope Francis is pro-abortion, pro-gay marriage and pro-contraception. Or perhaps they listen to soundbites and not his complete anthology of teachings from day one. If one listens to soundbites and promotes these like fundamentalist Christians pick a passage of the Bible here and there to make their ideological point against the Catholic Church, so too are these secularists and even neo-traditionalist Catholics doing the same with Pope Francis' words.

We all know from the complete context of everything that Pope Francis has said that His Holiness upholds the sanctity of human life from conception until natural death. We know that His Holiness believes what the Church teaches about homosexuality and marriage as it is presented in the Catechism although he won't judge any Catholic, who is striving to live a chaste life, be he homosexual or heterosexual, despite the sins we commit sexually according to our attractions.

We also know that Pope Francis will beatify Pope Paul VI who wrote Humanae Vitae and Pope Francis has pointed to this encyclical several times in his papacy thus far.

The press seems to be now realizing that Pope Francis is not that different from Pope Benedict and Saint John Paul II because they were stunned at Pope Francis' visit to a "cemetery" where crosses were planted to symbolize the graves of aborted babies. In this case, silence spoke louder than words and the secular press knew it.

Here is their spin, once again, this one from the Associated Press! Look at how they call pro-life popes and Catholics, anti-abortion rather than pro-life:

Pope Francis has generally avoided hot-button "culture war" issues like abortion, arguing that the church's doctrine on the sanctity of life is well-known and that he'd rather emphasize other aspects of church teaching.

Pope Francis has generally avoided hot-button "culture war" issues like abortion, arguing that the church's doctrine on the sanctity of life is well-known and that he'd rather emphasize other aspects of church teaching.

But he made a strong, albeit silent anti-abortion statement Saturday during his visit to South Korea, stopping to pray at a monument for aborted babies in a community dedicated to caring for people with the sort of severe genetic disabilities that are often used to justify abortions.

Francis bowed his head in prayer before the monument -- a garden strewn with simple white wooden crosses -- and spoke with an anti-abortion activist with no arms and no legs.

He also spent an hour blessing dozens of disabled Koreans who live in the Kkottongnae community, founded by a priest in the 1970s to take in disabled children and adults abandoned by their families. There is still tremendous stigma and discrimination against people with disabilities in South Korea, and supporters of the Kkottongnae community argue that if it didn't take these people in, no one would.

Francis caressed and hugged each of the residents of the community, young and old, and seemed genuinely pleased when one of the elderly residents with cerebral palsy, Kim Inja Cecilia, presented him with an origami crane she folded with her feet.

South Korea banned abortion in 1953 with exceptions for rape, incest or severe genetic disorders. The constitutional court upheld the ban in 2012.

Activists, however, say authorities turned a blind eye to abortions for decades until cracking down in recent years due to South Korea's low birthrate, one of the lowest in the world. During the 1970s and 1980s, South Korea's government saw big families as an obstacle to economic growth and encouraged families to have no more than two children.

Francis referred to the "culture of death" afflicting South Korea during his homily on Friday. But generally, he has shied away from making headline-grabbing anti-abortion statements, much to the dismay of conservative Catholics who had been emboldened by the frequent denunciations of abortion by two previous popes.

In a 2013 interview with a Jesuit journal, Francis acknowledged that he had been "reprimanded" for not pressing the issue. But he said it wasn't necessary to harp about abortion all the time.

"The church's pastoral ministry cannot be obsessed with the transmission of a disjointed multitude of doctrines to be imposed insistently," Francis said at the time. "We have to find a new balance; otherwise even the moral edifice of the church is likely to fall like a house of cards, losing the freshness and fragrance of the Gospel." (Pope Benedict had said basically the same thing in his papacy too!)

A day after the interview was published, though, Francis offered an olive branch of sorts to the more doctrine-minded conservatives in the church, denouncing abortions as a symptom of today's "throw-away culture" and encouraging Catholic doctors to refuse to perform them. (Really? Really?--see the spin!)
___
AP writer Youkyung Lee contributed to this report.
Posted by Fr. Allan J. McDonald at Sunday, August 17, 2014

I'll be honest. I heard Pope Francis speaking in English and he said "........we Catholics....". He identified himself as a Catholic. It did strike me as odd. I just don't think of him as Catholic. From the minute he stepped onto that balcony he has changed everything about the papacy. From his many, many questionable statements, to his liturgical abuse on Holy Thursday makes me suspect everything he says or does. I don't trust him and I can't help that feeling. To me he doesn't have any Catholicity about him. For instance he says he has devotion to Our Lady, then he puts a soccer ball on the Mensa of her altar where Holy Mass is offered. I find that confusing. I keep getting this nagging fear that something is wrong, very wrong.