THE MEDIA KNOWS WHAT IT IS TRYING TO DO TO POPE FRANCIS (UNDERMINE HIM AND THE CATHOLIC CHURCH) AND POPE FRANCIS KNOWS IT TOO!

UPDATE: NATIONAL CHISMATIC REPORTER, NCR, HAS A FAIR AND BALANCED SUMMARY OF POPE FRANCIS' STUNNING INTERVIEW TO A GOSSIP NEWSPAPER IN ITALY. PRESS HERE TO READ THE NCR'S TAKE! 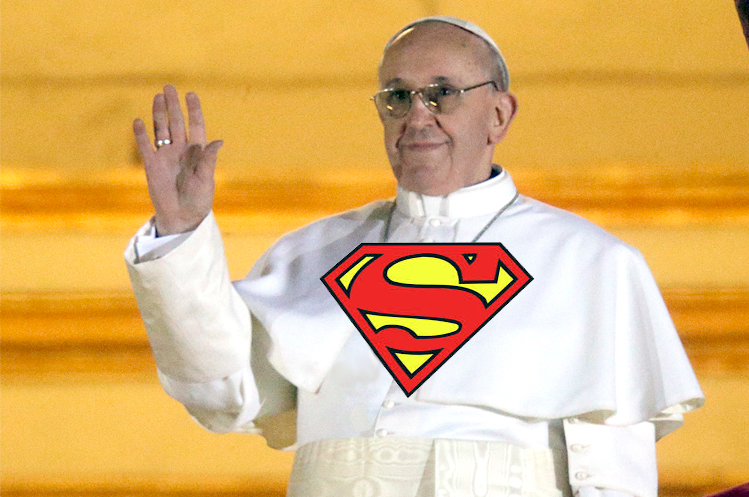 The money quote for Ash Wednesday--take it to the bank!

Francis told Italian daily Corriere della Sera he doesn't appreciate the myth-making that has seen him depicted as a "Superpope" (as an Italian street artist recently painted him) who sneaks out at night to feed the poor (as Italian newspapers have suggested).

... "I don't like ideological interpretations, this type of mythology of Pope Francis," the pope told Corriere. "If I'm not mistaken, Sigmund Freud said that in every idealization there's an aggression. Depicting the pope as a sort of Superman, a star, is offensive to me.

MY COMMENT: The media has constantly portrayed Pope Francis and a media superstar and Pope Benedict as his evil, villanized twin.

Why would this be the case? Because the media could not manipulate Pope Benedict. But they are trying hard to manipulate Pope Francis, who while pastoral, is no one's fool and is perhaps the most autocratic pope we've had since Pope Pius X!

While there is not continuity between Pope Francis and Pope Benedict in style or manner of personality and Pope Francis is trying to confront the corruption of wealth in the Church, especially in places like Germany, which has constantly been pushing the envelope toward heterodoxy because their wealth has ideologized them, Pope Francis is sending a clear message that bling does not make a pope or the Church, fidelity to the Deposit of Faith and the Magisterium does. It is this call, no this demand, to fidelity to the Magisterium and the Deposit of Faith where Pope Benedict and Pope Francis are together, are on the same page, are both Catholic!

This will certainly dispirit the progressive heterodox in the Church here in America, especially at the National Chismatic Reporter and the Leadership Conference of Women Religious, both organizations ideologues.

I continue to find it peculiar that the ones in the Church crying crocodile tears are the traditionalists and orthodox Catholics when it should be the progressive and heterodox Catholics who are having their foundation dug out right from underneath them by the cunning of this Pope Francis who is no one's fool!

Father, I agree that Pope Francis knows exactly what he is doing. He is playing the media in order to get those who would never consider the Catholic Church to look at her in a different light. The purpose is they will hopefully take a look at the Church and reconsider what they had thought. Then, given time, they will eventually get to those "hard" teachings but with a new knowledge and new faith. The media, just as you say, think they are manipulating him. Kind of like Jesus and Satan at the crusifixion. The media, even the catholic media, will continue to play the game where they pick out parts of sentences to get what they want out of this latest interview. Check out John Thavis' blog for an example of this.
Vianney1100

Well, if he knows that he's being manipulated, that makes some of his statements even worse than at first anticipated. As I have said, sometimes it's the media, sometimes it's Pope Francis himself that is the cause of the media circus.

If he (Pope Francis) takes a page from the Emeritus' playbook, the image of "superpope" will disappear overnight. The media had zero ammo (save the condom comment) from Pope Benedict XVI, to help them, they didn't like that, and thus made Pope Benedict XVI into a villan. Pope Francis often (not all the time) gives the media plenty of ammo to use (who am I to judge, self absorbed retrogrades, etc) and thus for making the job of the media easy, Pope Francis gets praised.

I think the reason tradtionalists (and those that sympathize) are really upset, the situation on the ground isn't all that great, and the Pope mocks or makes fun of them, or makes ridiculously careless statements and it's rather discouraging for the everyday battle.

I can't imagine anyone who truly loves the Church wants to look down or think discouraging things about the vicar of Christ....I hope so anyway.

Then he turns around and says the Church could support civil unions…great, just great.

I agree with all these comments. At the very least we need dignity restored to the papacy. Jan