WOW! POPE EMERITUS BENEDICT GIVES AN INTERVIEW ON HIS TIME WITH BLESSED POPE JOHN PAUL II AND SEEMS TO OFFER DISCREET ADVICE TO POPE FRANCIS TO BE WATERTIGHT IN HIS PRESENTATIONS TO AVOID MISINTERPRETATIONS! 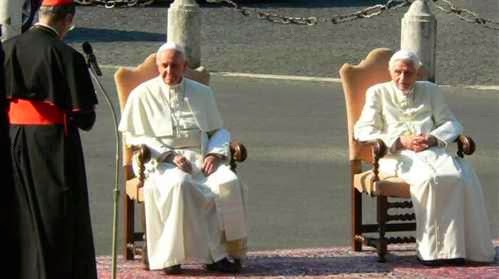 My comments first: The part that I am printing below comes directly from the Vatican Radio's website and in its entirety. But as I read it, I was puzzling that perhaps Pope Benedict and  even Vatican Radio are giving friendly advice to Pope Francis to be more watertight in his words and writings that do not allow for any other interpretation, that Pope Francis needs to be very, very clear.

(Vatican Radio) Pope-emeritus Benedict XVI has granted a lengthy interview on the topic of his years with Blessed John Paul II. The interview appears as the first in an Italian-language collection titled: Accanto a Giovanni Paolo II. Gli amici & I collaborator raccontano. Published by the Italian Edizioni Ares press, and in stores now, the volume features recollections by more than a dozen of the soon-to-be canonized Pope’s friends and closest collaborators, including: Bl. John Paul II’s secretaries, Cardinal Stanislaw Dziwisz, Archbishop Emery Kabongo and Archbishop Mieczyslaw Mokrzycki; the former Director of the Press Office of the Holy See, Joaquin Navarro-Valls; the Blessed Pope’s life-long friend, Wanda Poltawska; the postulator of his Cause for Sainthood, Fr. Slawomir Oder; and many others. Listen:

It was in November of 2013 that Pope-emeritus Benedict XVI agreed to answer Polish journalist Wlodzimierz Redzioch’s questions in writing, which he did by January of this year. The Pope-emeritus also personally verified the Italian translation of the original German text of his answers.

Among the topics covered in the interview are: the work Bl. John Paul II and then-Cardinal Ratzinger did to respond to liberation theology; their work on the Catechism of the Catholic Church; the most important aspects of Bl, John Paul II’s spirituality; the decision of the Pope-emeritus to open his predecessor’s Cause; the spirit of gratitude that pervades his memory of the man he served and succeeded.

The Italian dailies, Avvenire and Corriere della sera, ran lengthy excerpts from the interview in their Friday, March 7th editions, which included the Pope-emeritus’s recollection of the great faithfulness and support Bl. John Paul II showed him, even and especially in the most trying of circumstances. “Often he would have [had] sufficient reasons to blame me or to put an end to my [tenure as] Prefect [of the Congregation for the Doctrine of the Faith],” said Benedict. “Nevertheless,” he continued, “[Bl. John Paul II] supported me with fidelity and absolutely incomprehensible goodness.”

The Pope-emeritus went on to recount how, in the face of the storm that had developed around the declaration, Dominus Iesus [On the Unicity and Salvific Universality of Jesus Christ and the Church], then-Pope John Paul II told the then-Cardinal of his plans to use his remarks at the upcoming Sunday Angelus to defend the document unequivocally. “[The Pope] invited me to write a text for the Angelus that was, so to speak, watertight, [one that would] not allow for any other interpretation.” Explaining that John Paul wanted his unconditional and unqualified approval of the document to be unmistakably clear, the Pope-emeritus added, “I prepared a little speech. I did not, however, desire to be overly brusque, and so I tried to express myself with clarity but without harshness. After reading it, the Pope asked me again, ‘But, is it really clear enough?. I said ‘yes’. Anyone who knows theologians will not be shocked, though, [to learn that], nevertheless, there were those who argued that the Pope had prudently distanced himself from that text.”

How many of us have been saying that he is careless in his words and presentation? Finally, someone has told him.

The last year is an innovation we can all do without, thank you very much.

Keep in mind though, as watertight as the talk was that Cardinal Ratzinger wrote for Pope John Paul, it was still misinterpreted by theologians and others.

But it was obvious they had to try and misinterpret. Maybe Pope Francis is doing it on purpose to stimulate discussion and eventually come down solidly on orthodox positions. It just seems dangerous and I am not sure it is productive.

Now to see if Pope Francis is a good student, and listens to the advice to be more watertight....Yes, people misquoted JPII and Benedict XVI, but the real difference is that in the method of expression, they (the media) had to really stretch things. With Pope Francis, almost always he himself makes the headlining quotes.

Hallelujah! I am so happy that Papa Benedict has given this advice. Let us pray that Pope Frances takes this advice from his wise and humble brother!

I am very pleased to hear that Pope Francis has said that Benedict XVI should take a more active part in the life of the Church. That can only be positive for the Church.