IS THE NATIONAL CHISMATIC REPORTER USING POPE FRANCIS TO CONFIRM THEIR HERETICAL AGENDA OF MAKING THE CATHOLIC CHURCH SIMILAR TO THE ANGLICAN COMMUNION? YOU DECIDE. 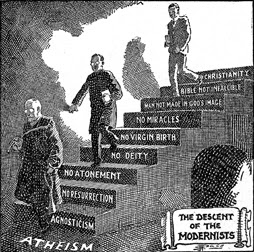 Given my doctrinal and disciplinary orthodoxy, you might be surprised to know that I don't believe the Church or her leaders should be micromanaging the moral lives of parishioners. I would never refuse a Roman Catholic who comes forward to receive Holy Communion unless I thought there was a political statement about some issue that was being made. Such would be the case if someone had a tee shirt on that said "I'm divorced and remarried." Or "I am gay and promiscuous and love it." We live in a church were some Catholics try to do these things, but it is quite rare.

What the National Chismatic Reporter highlights in the article below is rare too, but it fits their ideological agenda to point the rare out in order to tug at heartstrings as progressives are prone to do, a form of manipulation, in order to promote their heterodox agenda . It is dishonesty pure and simple!

I think it is sufficient to say to Catholics in general that one must be in a state of grace to receive Holy Communion. When one is in a state of mortal sin, one must go to Confession and receive Sacramental Absolution after having expressed sorrow and repented of their sin. But priests and bishops are not policemen. And neither should anyone in the pew! We don't judge who goes to Communion and who doesn't! That judgement belongs to God and God will do it and he will do it properly and not make any mistakes in doing it!

But with that said, what the National Chismatic Reporter's ideology and agenda is goes way beyond what I just expressed. It is more of the same drivel from them where they promote alternative lifestyles and even the abortion mentality to change the Church and make her into something else altogether different because they are disillusioned with the truth and the TRUTH, just like Judas was.

From the National Chismatic Reporter (NCR):

Pope Francis is winning hearts and minds around the world for his emphasis on mercy, personal simplicity and vision for a church that is “bruised, hurting and dirty because it has been out on the streets.” He rejects culture-war Christianity and aloof moralizing from the safety of the sanctuary. He warns that a fixation on “small-minded rules” can stand in the way of ministering to those on the margins. A look at at a few recent headlines shows that some Catholic leaders never got the memo from Pope Francis or tossed it in the trash.

A patient who suffered a heart attack at a Washington hospital recently told the Washington Post that a Catholic chaplain denied him last rites because he was gay.

Earlier this year, a Catholic middle school in Montana fired an unmarried teacher after she became pregnant. The superintendent of Catholic schools for the diocese defended the decision with a cold legalism that would have made those letter-of-the-law Pharisees Jesus called to task proud.

Nothing sends a better “pro-life" message than kicking a vulnerable pregnant woman into unemployment, right? The Catholic superintendent must have missed that part in Pope Francis’s groundbreaking interview with a Jesuit journal where he said:

"If the Christian is a restorationist, a legalist, if he wants everything clear and safe, then he will find nothing…Those who today always look for disciplinarian solutions, those who long for an exaggerated doctrinal ‘security,’ those who stubbornly try to recover a past that no longer exists­ —they have a static and inward-directed view of things. In this way, faith becomes an ideology among other ideologies."

A Catholic priest in Missouri called a woman about to attend her mother's funeral and told her he would not give her Communion at the Mass because she was in a same-sex relationship. The parishioner had served as a lector, cantor and choir singer at the church for more than a decade. (A lesbian in the Archdiocese of Washington experienced the same treatment in 2012.) Pope Francis?

“The Eucharist, although it is the fullness of sacramental life, is not a prize for the perfect but a powerful medicine and nourishment for the weak,” he said in his Apostolic Exhortation, the Joy of the Gospel. In fact, the pope's defining metaphor has been the need for the church to act like a "field hospital after battle," as Francis describes it in vivid terms. "It is useless to ask a seriously injured person if he has high cholesterol and about the level of his blood sugars! You have to heal his wounds."

When the Boy Scouts of America announced it would drop its ban prohibiting openly gay youth a priest in Northern Virginia swiftly kicked out his church's Boy Scout troop. "No more compromising with the devil," the priest thundered as he denounced "perverted relationships."
Paging the Holy Father.

“If someone is gay and he searches for the Lord and has good will, who am I to judge?” he told reporters on the papal plane after World Youth Day in Brazil. In a lengthy interview with the Jesuit priest and editor Antonio Spadaro, Pope Francis offers a lesson in humanity to clergy and other religious figures who reduce faith to ideology and rigid doctrine.

"A person once asked me in a provocative manner if I approved of homosexuality," the pope said. "I replied with another question. Tell me: when God looks at a gay person, does he endorse the existence of this person with love, or reject and condemn this person? We must always consider the person."
And then there is Archbishop John Myers of Newark, a man who wants to retire in style. The archbishop’s nearly 5,000-square foot vacation home is apparently not cushy enough for his tastes.

The Star-Ledger of Newark reports that a major new addition will include an indoor pool, three fireplaces and an elevator. The half a million dollar tab will be picked up by the archdiocese.
I'm afraid we're going to have to call on that Argentine making trouble at the Vatican once again.
Pastors should be “close to the people … animated by inner poverty, the freedom of the Lord and also by outward simplicity and austerity of life," Pope Francis said in a speech to papal nuncios, whose job includes nominating bishops. Bishops should not have, he insists, “the psychology of princes.”

Un-Christian behavior on the part of Christians is as old as Christianity itself. Jesus had to remind the Pharisees again and again that their prideful defense of the letter of the law led them to defile the law's spirit of justice, love and compassion.

Pope Francis has brought an unexpected season of renewal and hope for the Catholic Church not because he is a liberal or a conservative. He is inspiring so many because he acts like a Christian should act. Not a bad starting point for Catholic clergy and anyone who tries to follow in the footsteps of Christ.

Pope Francis has been trying to show the world that the Catholic Faith is a church that loves sinners but hates sin. And it's a wonderful thing. With that said I do think the pope does himself and the Church a disservice by his off the cuff comments and actions which seem to undermine the teachings of the Church.

It almost appears that the pope sees the doctrines of the Church as something that keeps people away from Christ instead of something beautiful that lead them to Christ. It causes confusion when he refers to people or groups by using uncharitable names like " self absorbed neo pelagian" etc. it causes confusion when he seemingly dismisses the teachings of the Church and then condemns "small minded rules".

Pope Francis is being used by the media. He has to know this. And he needs to do something about it. The pope is the pope of all Catholics not only of the liberal ones who he embraces all the time. He is also pope of those Catholics who are more traditional and we don't deserve to be called names and our concerns dismissed. Pope Francis is reckless in his words and actions. He needs to be unquestionably a son of the Church by word and by deeds and not just say that he is faithful. A good example of this would be on Holy Thursday. If he thinks that women's feet should be washed during the Mass, then he should use his authority to formally change the liturgical norms for this rite. It is a scandal that he just ignores them as if liturgical norms don't matter. And he should realize that as pope every word and deed will be scrutinized by the whole world. Maybe that is unfair but that is the reality of his position. Wouldn't it have been better if he said that a mother's love should be unconditional for her child and that's one reason why abortion is so evil for a mother to abort her own child. That being said we need to show compassion for a woman who may find herself in this difficult situation. That would be harder for the media to manipulate than saying " we can't obsess about abortion".

Pope Francis needs to take some of the blame for the misinterpretation of his words and deeds. I understand that he is a liberal, but he is pope and he needs to be crystal clear in his teaching. He can't keep saying outrageous things and just because it's not spoken ex cathedra it gets rationalized. It doesn't mean his words and deeds don't have weight.

We all need to pray for Pope Francis that he finds a way to show compassion while upholding the teachings of the Faith in a clear and consistent manner.

Just as "the spirit of Vatican II" hijacked the real message of the Vatican II council, so will this leftist "Spirit of Francis" hijack the pope's real message, unless the pope himself issues a strong statement about such leftist dissenters. But, alas, he only uses such tactics on traditional Catholics, ie, self absorbed promethean neo pelagians.

Father,
Would you refuse communion to a Nancy Pelosi or Andrew Cuomo? Why or why not?

I believe that Father McDonald is absolutely right about not denying communion to parishioners. Unless there is a open, blatant effort to make a statement during Mass, as Father indicated in this post, he should not deny communion to anyone.

And it is the Bishop's responsibility to sanction specific Catholics, such as Nancy Pelosi, NOT the parish priest.

You preach fire and brimstone against their secular beliefs and see if they would walk out.

Thank you Father (and Anon) that clarifies things for me. That it's the Bishop's responsibility makes sense. I like RCG' comment on what the homily should be on those days they show up. Seems that such a homily would be necessary to prevent Scandal.

Fr, I am with you, it is not our job to judge who comes up for communion, but I disagree, if the Bishops' aren't enforcing the law, comes down to avoiding scandal...in the case of Pelosi or other public sinners (the key being public)...

If a homilist tailors his preaching based on the presence in the congregation of one peculiar sinner, there's the scandal and the tragedy.

PI, point well made. Maybe just cover the teachings of the Church and remind the congregation of their obligation to follow it on pain of damnation. But that would be the same thing, wouldn't it?