REFLECTIONS ON THE SOLEMN SUNG EF MASS FOR SAINT JOSEPH, HUSBAND OF THE BLESSED VIRGIN MARY 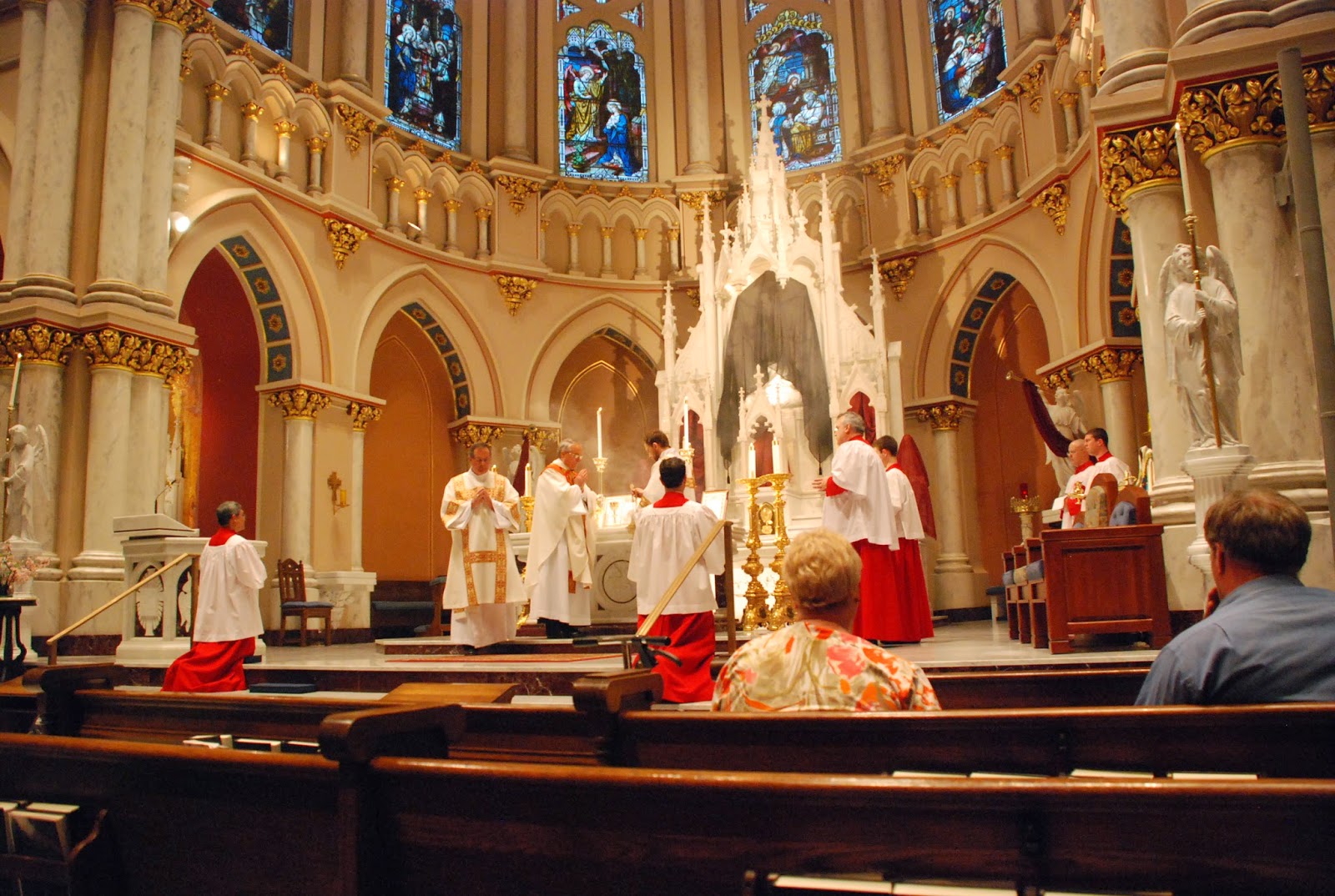 We did video our Solemn Sung Mass and it will take a couple of weeks for us to be able to post it. The Ecce Agnus Dei will be missing as the tape ran out and it took a bit to replace it to finish the Mass, I am told.

What impressed me most was that we were able to pull this most solemn form of the EF Mass off. John Nolan will not be pleased, though, as we did not have an MC or a "minister" with humeral veil to hold the paten, nor ministers vested in copes. So I guess we haven't mastered the highest form of the Mass yet, but we came pretty darn close.

We had about 150 people in attendance on a Wednesday night. Everyone seem to come downstairs for the reception afterwards, so these traditional Catholics aren't so introverted that they can't enjoy one another's company.

Everyone that I spoke to and that was just about everyone said how solemn and beautiful this Mass was. They kept referring to it as being so reverent. I have to agree.

I was pleased with the congregation's verbal and sung responses, especially for the Kyrie (Orbis Factor), the Gloria and Credo (Jubilatio Deo). Our congregation was not able to participate very well with the Orbis Factor Sanctus or Agnus Dei, but they would have if we had used the Jubilatio Deo versions.

Of course they could not participate in the complex Gregorian Chant, chanted by a cantor, for the Introit. But it was so beautiful, there was no need.

I must admit that I prefer by far the EF's Rite of Sprinkling as a prelude to the Mass, using already blessed Holy Water over the Rite of Sprinkling inserted into the Mass in the Ordinary Form that entails a lengthy prayer of blessing the Holy Water.  However, I could see this preludal rite replacing the Prayers at the Foot of the Altar, but with the priest and ministers doing these silently as the Introit was chanted was quite lovely and a part of the outward reverence of two sacred actions occurring simultaneous, one quietly and the other with lovely sounds.

Could this Mass be as reverent and solemn sung in English? Yes, especially if it were the English that is allowed in the Anglican Ordinariate. But the revised English of the Ordinary Form would work as well, even with the more complex Gregorian Chant for the Introit, Offertory and Communion Antiphons.

Can the Ordinary Form of the Mass in English have the same sort of reverence and solemnity as the EF Mass?

Yes, but the "ad orientemness" of the EF Mass and its choreography would need to be brought to the OF Mass. This is what I would recommend:

1. Use the EF's Rite of Sprinkling as the prelude to the Mass. I think that since this is a prelude and not a part of the Mass, it could be allowed. I see no liturgical reason why it couldn't be. If one used the EF's rite of sprinkling during Mass, after the greeting, this would be illicit, but not as a prelude.

2. Do the Introductory Rite, with the official chanted Introit in English, facing the altar as in the EF. Begin after the Introit, the Sign of the Cross, Greeting and introduction to the Penitential Act at the foot of the altar and remain there through the Confiteor and absolution. The priest and the ministers approach the altar for the Kyrie standing at the Epistle side and lined up as in the EF Mass.

3. All move over to the center of the altar for the Gloria after which the priest bows to the altar, turns and faces the congregation and chants, "Let us Pray." The the priest and ministers move to the Epistle side for the chanting of the Collect, lined up as in the EF.

5. The Credo and Intercessions are done at the altar with the deacon chanting the intercessions facing ad orientem behind the priest, sub deacon behind him.

6. The priest sits for the preparation of the altar and then all is carried out as normal for an OF Mass but simply ad orientem but with the deacon and subdeacon mimicking the rubrics for it as in the EF. An MC could be employed but the one with the paten would not be needed.

7. Holy Communion would be kneeling.

9. The priest goes to the center of the altar, bows, turns to the congregation for the Blessing and dismissal, turns back, kisses the altar and departs as usual.

While my suggestions for an all orientem Ordinary Form Mass as I have indicated with EF choreography is not done normally, it could easily be so and without changing anything else in the OF Mass and would indeed show the continuity, the clear continuity, between the two forms of the Latin Rite Mass, even in an all vernacular OF Mass.
Posted by Fr. Allan J. McDonald at Thursday, March 20, 2014

Ministers in copes are a feature of the Sarum Rite, not the Tridentine (although there is a coped Assistant Priest at a Pontifical High Mass).

I may be wrong, but I have always believed that the water for the Asperges in the New Rite may still be blessed in the sacristy before Mass. The custom at the London Oratory, though not strictly by the book is for the Asperges to be done as part of the Entrance procession, followed by the (old) prayers sung at the front of the sanctuary facing the people, followed by the Introit sung during the incensation, and then proceeding directly to the Kyrie.

If you want to see a video of a Solemn Mass sung in English (including English Propers with congregational response, and using the missal chants for the Ordinary) go to jhnilm.org.uk - this was a Mass celebrated at the Birmingham Oratory in 2011 by Archbishop Bernard Longley. The choreography is the same as for the more familiar OF Latin Mass.

As it was a Saturday, it's a votive Mass of the BVM. You'll recognize the Introit as an English version of 'Salve sancta parens', from the Graduale Parvum and the choir was a scratch ensemble, but it's so easy to sing.

Brave of you. I would not think to organize a solemn high Mass without an MC to direct the priests. Otherwise, how could they be expected to get it all right? These days, one cannot ordinarily assume that all the sacred ministers have mastered Fortescue for themselves.

The solemn vernacular Novus Ordo Mass John mentions is not conspicuous at the John Henry Newman ILM site, but is posted in two parts at

This OF Mass may seem superficially different from the typical OF parish Sunday Mass; judge for yourself?

Henry, the Birmingham Mass was designed to showcase the (then) new translation and the missal chants, and to try out the Graduale Parvum. Although most parishes would not field a deacon and subdeacon and would probably celebrate versus populum the main difference is that virtually everything is sung, including the lessons and the central part of the Eucharistic Prayer. And apart from one (Latin) hymn at the Offertory it is the liturgy which is being sung. In most parishes the celebrant sings little (if at all), there are no sung Propers, and there's an over-reliance on non-liturgical hymns which range from sturdily traditional to saccharine modern.

Because of the chant, and the objectivity resulting from a sung liturgy, a Mass like this is much closer to a sung Latin Mass (in either form) than to a vernacular Mass as celebrated in most parishes.

If the OF was like the videos, I really think people would argue less for the TLM

I agree, Joe. (Even of one who has for years devoted much of his three T's to the TLM.) Indeed, if the Novus Ordo had been "done right", it's possible there would have been no perceived need for Summorum Pontificum. And the TLM might have gone the way of the SSPX. So perhaps we have the crapped dumped on the Novus Ordo for the past four decades to thank for the restoration of the TLM!

I was very sorry to have missed this mass. I was really looking forward to it, but I was out of town with my wife who'd just had a baby. Last years solemnity of st. Joseph was my first experience with a more traditional mass in Latin and I loved the beauty and reverence of it.