THE SIGN, SYMBOL AND SPECTACLE OF A PENITENTIAL PAPACY AND HIS CHURCH! SACK CLOTH AND ASHES FOR THE CORRUPTION OF THE PAST 50 YEARS 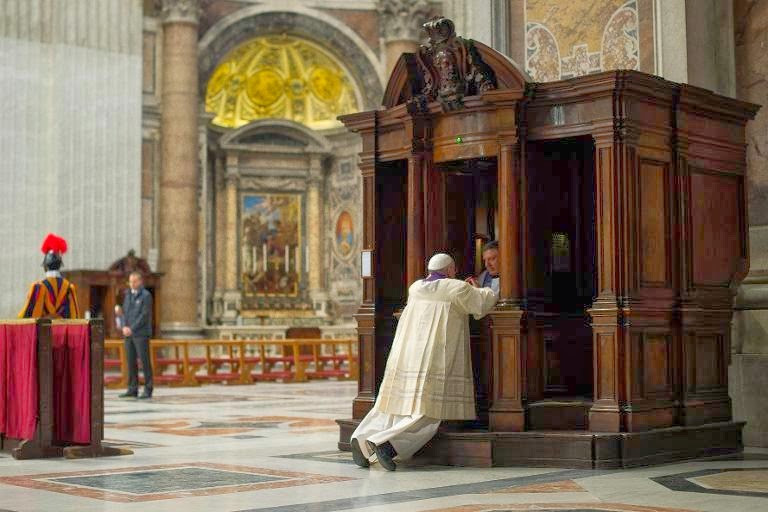 For Pope Benedict, the "reform of the reform" in continuity had to do with doctrine, of course, and a recovery of the sense of the sacred especially as it concerns the liturgy and its beauty.

Pope Francis' "reform of the reform" in continuity continues to emphasize orthodox Catholic teaching, but the emphasis is on the recovery of the sense of sin and the need for penance. And the penitential character of his papacy is going to be a long Lenten season of austerity and what we normally associate with the Lenten Season, fasting, prayer and almsgiving.

Thus Pope Francis' celebration of the Liturgy is beautiful but austere almost ascetic.

The biggest crisis the Catholic Church has faced since the Reformation and its Counter Reformation is what happened to the Church after the Second Vatican Council. Drug-like euphoria about change in the Church completely in discontinuity with the historic Catholic Church created rampant confusion amongst clergy, religious and laity. Usually it was the clergy and religious who confused themselves, confused and confounded the laity.

The misapplication of the Second Vatican Council, the opening of Pandora's Box with the sexual revolution and throwing out of old Catholic morality for something called the new Catholic morality, led to widespread experimentation by immature single priests and religious often with devastating consequences. The worst of this acting out was done by immature clergy and religious who used their status of trust and respect to betray children, teenagers and adults.

Worldwide today, the Church is coping with this unprecedented apostasy in the Church and her clergy and the immorality it wrought. Often it was fomented by bishops who looked the other way or simply refused to acknowlege how terrible things had become or thought this terrible reality was the wave of the future. There was more than sin involved here, there was rank corruption.

Enter Pope John Paul II who saw the apostasy but did not understand the perversion that was a fact of life with so many bishops who enabled the crisis we are still experiencing. Pope John Paul II did try to re-establish the great "discipline" of the Church. Pope Benedict continued to do so, seem to grasp a bit better the problems in the clergy and religious and ultimately in the laity but he was thwarted by Satan and corruption in his curia.

Now we have Pope Francis with his penitential papacy, austere, back to the basics and calling Catholics to recover a profound sense of the damage sin does to their salvation, the temptations of Satan and to go to Confession, receive Divine Mercy and be renewed in God's Grace.

I have often wondered what type of penance bishops should do for their part in the decline of the Catholic Church after Vatican II and the corruption of clergy and religious in their dioceses. The Bishop of Rome, Pope Francis is showing the way of penance, of sack cloth and ashes.

He has also recovered the Catholic Church's emphasis on Satan and how the devil tempts us and can even possess us. The smoke of Satan, as Pope Paul VI stated, had entered the Church after Vatican II and only a recognition of this and serious prayer and exorcism can deal with it.

Pope Francis speaks of sin in the traditional categories that most pre-Vatican II Catholics can appreciate: Original Sin and Actual Sin. He speaks of venial and mortal sins as these were taught prior to the Council. But he has added a new twist, that of corruption, which I suspect is a life of mortal sin and a love for mortal sin without fear of eternal consequences.

Pope Francis has also spoken of damnation and its possibility for the corrupt. He condemned unrepentant mafia in Italy to hell where they would live forever.

Karl Augustus Menninger, a Jew, wrote a book in 1973 titled, "Whatever Became of Sin?" It was an excellent "right-on" commentary on how the slow but steady rejection of the concept of sin was

being eroded in our society at that time (keep in mind the zenith years for the sex abuse crisis took place in the early 1970's to about 1974!). It has proven to be somewhat prophetic as we
can observe in all of the basic institutions of U.S.(even world societies) sin has become almost a non-entity...even in some church circles where everything is OKAY("do your own thing mentality')...thus...instead of religion serving the historical role of being a moral compass for society...society is dictating the morality. Modern society will suffer long and God help future
generations.
Pope Francis, in his austere and penitential papacy, is calling all Catholics to recognize that we are sinners, and without God and His grace of Divine Mercy we cannot be saved; we will go to hell.

This will be a papacy of sack cloth and ashes, penance for the corruption mortal sin in the Church for the past 50 years, the decline of the sense of sin and its damming results and concomitant decline in the use of the Sacrament of Penance during this period and the abuse of minors this corruption has brought about.
Posted by Fr. Allan J. McDonald at Saturday, March 29, 2014

Fine, then. I can think of no better way to heighten the awareness of sin and the mercies of Christ's grace than to re-emphasize the Sacrifice of the Mass and to re-orient the Liturgy to that effect. Fix the Liturgy, fix the Church. I find it difficult to focus upon sin and repentance in Masses where the atmosphere is casual, smiley/friendly, and protestant.

In the pre-Vatican II Church, it was precisely the liturgy that sustained the awareness of sin, and sacramental confession was necessary for participation in the liturgy. People went to confession solely to prepare for communion at Mass, so as to save their immortal souls. Therefore, I would not expect any increased reliance on sacramental confession until a true reform of the reform -- that is, of the liturgy -- once again provides the motivation, in the form of awe and mystery at Holy Mass that inculcates this need for confession.

But thus far there has been no discernible emphasis whatsoever on the necessary reform of the liturgy. Unfortunately, it appears instead that the momentum for reform of the reform that Benedict inspired has been dissipated. It likely will take a conscious and explicit change to renew progress and for any "new evangelization" to actually occur. Either our pope and our bishops realize that to save the Church they must save the liturgy, or they do not. There is no indication that they do.

Henry, No, they do not, and this Pope's redundant emphasis on the "pastoral" insures more "practical theology" to the virtual exclusion of Liturgical theology, which is why is needed. We are swimming in "practical" (read "pedestrian") theology and look where we are.

My previous post should have read, "…to the virtual exclusion of Liturgical theology, which is what is needed."

Next on everyone's reading list: "The Theology of the Chasuble Hem Lift."

Anonymous, you would not know Liturgical theology if it ran up and bit you on the apse...

Good Liturgy is where it needs to start, though I suppose it's good to see a the Pope in almost nearly proper choir dress.