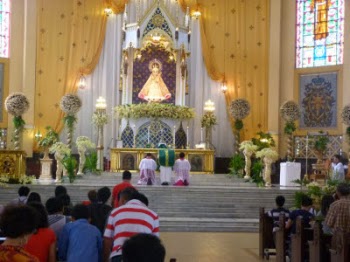 However, the one area where I think a reform of the order of things would be most helpful is in the Introductory Rite. This reform of the OF Missal with nothing else and leaving in place the "Offertory Prayers" as we have them currently, would go a long way in showing the organic unity of the EF Mass and the OF Mass.

My suggestion, or dream, and again I'm not throwing this out there for anyone to experiment, comes from the practice we've had since the 1970 Missal of having a "Penitential Rite or Act" for the priests and congregation at the beginning of Mass. There is only a vague hint of the previous "clerical" "Prayers at the Foot of the Altar" of the pre-Vatican II Missals.

In the sung Mass, in the 1962 Missal, the PATFOTA, were said silently by the priest and ministers as the choir/schola chanted a long version of the Introit. So technically it wasn't a part of the Mass, but a private devotion prayed publicly for the priest's prayerful and penitential preparation of the Mass.

In 1958 with the advent of the Dialogue Mass for the Low Mass, the congregation was invited to join in saying the parts normally reserved to the other ministers (altar boys) but still it was seen as a penitential prelude to the actual Mass, a private devotion, if you will, recited publicly.

Of course there are duplications and repetitions in these prayers in terms of the priest and then the ministers, especially with the Confiteor and absolutions.

The 1970 Missal until this day with its various editions, eliminated the Prayers at the Foot of the Altar and instituted  having the Penitential Rite following the "Sign of the Cross"then with the misplacing of the Greeting which in turm led to the introduction of the Penitential Act with formal words in the missal or similar words devised by each priest, spontaneously or written out.

Often times, these words that were the "similar words" became mini-homilies reflecting on the Scriptures and an examination of conscience as well, which was a total abuse of this portion of the Mass and not foreseen as the point of the Penitential Act at all.

Then amongst the too many options allowed, one of which is the truncated Confiteor, it was also allowed for the priest to make up petitions to go with the Lord, Have Mercy, if that option was chosen, again breaking ritual, adding novelty and misconstruing what this Penitential Act is meant to be. It turned it into a kind of Communal Penance Service, with a kind of sacramental absolution but no individual Confessions.

In other words, the revision of the Introductory Rite of the Mass has been somewhat of a disaster given the many options and the possibility of ad libs from the priest at this point in the Mass, completely contrary to Latin Rite Ritual and its repetitiveness.

However, in keeping with allowing the Congregation to participate in the Prayers at the Foot of the Altar in Low Masses beginning in 1958 and the nature of the Penitential Act as a congregational element in the 1970 Missal and its various subsequent editions, my suggestion for the Revision of the Ordinary Form's Introductory Rite takes this congregational participation into account as an organic development that began with the pre-Vatican II Missal and continued with the reform of the Mass especially in the revised Penitential Acts allowed. It also takes into account Vatican II's desire in SC to eliminate "useless repetition" and to enact "noble simplicity."

So, this is my suggestion based upon continuity and organic development, eliminating useless repetition and instituting noble simplicity:

A hymn is selected to accompany the procession to the Foot of the Altar. After the priest has arrived at the foot of the altar and facing the altar, the hymn is concluded and the priest begins:

P: In the Name of the Father, + and of the Son and of the Holy Spirit.
A: Amen

P & A: I confess to Almighty God, to Blessed Mary ever Virgin, to blessed Michael the Archangel, to blessed John the Baptist, to the holy Apostles, Peter and Paul, to all the Saints, and to you, my brothers and sisters, that I have sinned greatly in thought, word and deed and in what I have failed to do: (striking breast three times) through my fault, through my fault, through my most grievous fault. Therefore I beseech blessed Mary ever Virgin, blessed Michale the Archangel blessed John the Baptist, the holy Apostles Peter and Paul and you my brothers and sisters to pray to the Lord our God for me.

P: May Almighty God have mercy on us, forgive us our sins and bring us to everlasting life.
A: Amen.

P: You will turn, O God, and bring us to  life.
A: And Your people shall rejoice in You.
P: Show us, O Lord, Your mercy.
A: And grant us Your salvation.
P: O Lord, hear my prayer.
A: And let my cry come unto You.

Then, as the priest ascends the altar, the official Introit is chanted as the priest says his quiet devotional prayers ascending the altar and kissing it and incensing it if used.

After reverencing and incensing the altar, the priest go to his chair. The Introit is concluded.

P: The Lord be with you.
A: And with your spirit.

The rest of the Mass in the Ordinary Form is as it is. What do you think of this revision?

I like it. A couple other tweaks I would make: Suppress "responsorial Glorias", and only allow "through-composed Glorias", suppress the "protestant part" of the Our Father, emphasise better that the handshake of peace is optional not mandatory, and have the laity kneel for the final blessing.

For what it's worth, here are my comments.

1. It's another tweaking, albeit in a nostalgic direction. The long Confiteor is not the issue - the Dominican Rite has quite a short one, as did the Sarum; the point is that it is recited twice, once by the priest and then by the ministers. This is not 'useless repetition', it is repeated for good reason. If you want to keep the Actus Poenitentialis of the Novus Ordo, then fair enough; but I don't see the point in chucking in a few of the Tridentine prayers and making the whole Act preparatory to the Mass itself, which would be contrary to the integrity of the New Rite.

2. "A hymn is selected to accompany the procession". Why? Because people expect everything to kick of with a vernacular metrical hymn? The Introit is the processional chant, and in EF Masses where there is no Asperges, it has been restored as such, with extra psalm verses inserted as necessary. The same should apply even in vernacular OF Masses using English Propers, e.g. the SEPs of Adam Bartlett. Hymns are the elephant in the room, and until we move away from the concept, there can be no real improvement.

3. In your scheme, where does the Mass actually begin? When the celebrant reads the Introit? But in the Novus Ordo he doesn't (unless no-one else does). The dialogue Mass, which goes back to the 1920s, didn't work because the PATFOTA were never intended to be a dialogue with the congregation. The NO introductory rites, which are part of the Mass, are a sung dialogue between priest and people, like the dialogue before the Gospel and the Preface dialogue, and they actually work, coming as they do between the Introit and Kyrie.

By all means ditch some of the optional elements, and discourage the opening 'Good morning' and reference to the weather and yesterday's football results, but as the saying goes, if it ain't broke, don't fix it.

The GIRM is a problem. We need more in the way of precise rubrics and fewer diversions into church architecture and suchlike matters. And a musical directive is badly needed - a lot has happened since 1967 when the last one was issued.

You're probably a good pastor, though with too much time on your hands. Get out there and smell your sheep, and leave liturgical work to people who know how to do it.

I found him! I found Waldo!

Anonymous, how do you know how much time Father M dedicates to the various activities of his day?

Cameron, how do you?

Father, your suggestions are good ones but my preference would be to say the EF Mass in the vernacular. The prayers are beautiful and the whole Mass has symmetry. That would result in no offertory procession and sign of peace - good - not needed and distracting. Also, no lay people reading, the presence of multi-coloured clothing and voices in the sanctuary I think detracts from the Mass and it's symmetry.

The result would be a distinction between the role of the laity and the ordained priesthood, something sadly lacking since Vatican II, where the laity seem to want the role of a priest without the sacrifice involved. Then we would get less rudeness from the laity that we see towards priests time and time again in parishes, typified by one of your respondents above.

Jan, unless you instruct the priest in the EF to say everything aloud, and in a large church into a microphone (in which case it would not be the 1962 Mass) there is little point in saying it in the vernacular (apart from the Epistle and Gospel, which is allowed anyway) and in a Low Mass perhaps the Introit, Collect, Gradual, Alleluia and Postcommunion. In a High Mass the case for the vernacular is even weaker, since one would expect the sung Propers from the Graduale Romanum and a plainchant or polyphonic Ordinary - imagine Dan Schutte's 'Mass of Christ the Savior' at a Solemn Mass! The mind boggles!

Lay readers are not obligatory in the OF, nor is the offertory procession, nor is the sign of peace. As for symmetry, the OF is actually more symmetrical than the EF, since it is essentially a 'designer Mass' whereas the EF represents centuries of so-called organic development. It was its very untidiness which earned it the disapproval of 20th century liturgists.

Sorry, John Nolan, I can't see any symmetry in the Novus Ordo Mass at all because every Mass you go to is different according to the priest who offers it beginning with some have introductory pleasantries, there is clapping during the Mass, etc. No, the offertory procession etc isn't obligatory but that is the very problem that the Novus Ordo Mass can be said any which way, on any altar where as the EF is set by the rubrics.

My point about the EF Mass being said in the vernacular is for those who have a preference for Mass said in the vernacular. In fact I was surprised to read that the SSPX offer the Tridentine Mass in Asian languages where they find it necessary. If a group as traditional as the SSPX has done that it seems it could be done. Of course, I and others prefer the Mass said in Latin. I

My point is that I just don't see there is any way to patch up the Novus Ordo Mass by trying to make it more like the Tridentine Mass - might as well go the whole hog and revert back to reading the English side of the missal which was what we were originally told was going to happen but of course we all know it didn't stop there ...