POPE FRANCIS TO ITALIAN POLITICIANS: THERE IS A DIFFERENCE BETWEEN BEING A SINNER AND BEING CORRUPT (AND THIS HOMILY ON THE SAME DAY AS PRESIDENT BARACK OBAMA VISITS HIS HOLINESS) 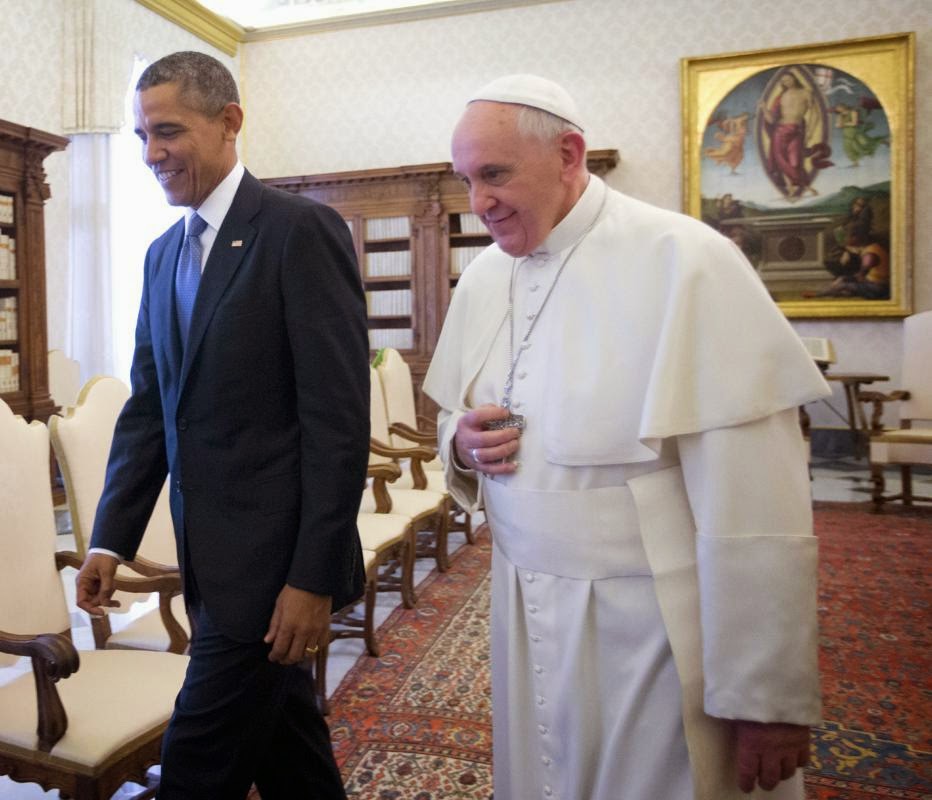 Pope Francis seems to make connections in his talks and those he is challenging. Yesterday, after accepting the resignation of the German bling bishop, Pope Francis spoke on what it takes to be a good bishop.

Today, the same day as Pope Francis meets with President Obama, he also spoke at a solemn Mass in St. Peter's to Italian parliamentarians. He made his usual distinction, which I love and I hope he writes about in more detail, between being a sinner and being corrupt.

Could the Holy Father have used the same terms with the President of the USA? I wonder?

Here is the homily the pope gave prior to his meeting with President Obama:

Pope to Italy’s Parliamentarians: no to slaves of duty, yes to God

(Vatican Radio) In Jesus’ time, the leading class had distanced itself from the people, abandoning them by pursuing their own ideologies and sliding ever downwards into corruption.

That’s what Pope Francis said Thursday morning in his homily while celebrating Mass in St Peter’s Basilica, with the presence of nearly 500 Members of the Italian Parliament.

Most members of Italy’s Parliament attended the mass, including nine ministers and the Speakers of the Senate and the House.

In his remarks, Pope Francis referred to the day’s first reading from the Book of Jeremiah which speaks of the prophet who gives voice to God’s pain regarding a generation which, the Pope observed, failed to welcome his messengers, preferring instead to justify its sins. This turning away from the Lord caused Him great pain, the Pope said, noting that this theme also runs through today’s Gospel reading which speaks of the leaders of the people as being blind to God.

"The hearts of this people, this group, with time became hardened so, so, so much - so that it was impossible to hear the voice of the Lord. And as sinners, they slid (downwards); they became corrupt. It 's very hard for a corrupt person to go back (on his tracks). The sinner, yes, because the Lord is merciful and awaits us all. But the corrupt person is fixated on his affairs, and these people were corrupt. And for this, they justify themselves, because Jesus, with his simplicity, but with his strength in God - he made trouble for them (it: dava loro fastidio). "

These were people, continued Pope Francis, who “have taken the wrong path. They resisted the salvation of the Lord’s love, and thus slipped away from the faith, from a theology of faith to a theology of duty.”

“They rejected the Lord’s love and this rejection put them on a path that was not the dialectic of freedom offered by the Lord, but that of the logic of necessity, where there is no room for the Lord. In the dialectic of freedom, there is the good Lord who loves us, who loves us very much! Rather, in the logic of necessity, there is no place for God: this must be done, this must be done, this must…They have become behavioral (it: comportamentali): well-mannered men, but with bad habits. Jesus calls them ‘whitewashed tombs’.”

Lent, Pope Francis concluded, reminds us that “God loves all of us” and that “we must make the effort to open up” to Him:

"On this path of Lent it will do us well to think about this invitation from the Lord to love, about this dialectic of freedom where there is love, and to ask ourselves, all of us, …am I on this path? Do I risk justifying myself and take another path? A road with many junctions (it: strada congiunturale) because it does not lead to any promise ... And we pray that the Lord gives us the grace to always go down the path of salvation, to open ourselves to the salvation that only comes from God, through faith - not from what was proposed by these 'professionals of duty,' (it: dottori del dovere) who had lost the faith, and who led (it: reggevano) the people with this pastoral theology of duty.”

Diplomacy with a rat is not an honest act. I’m not sure why our popes feel compelled to meet with “gentlemen” like Clinton and Obama, not to mention any number of foreign leaders and make joint public appearances with them displaying friendliness and camaraderie. If you don’t have the courage to tell the truth about a person’s beliefs then don’t give scumbag politicians the opportunity for valuable photo ops. The only thing that meetings like this accomplish is to confirm in the minds of the tepid Catholic population that the pope must like Obama so I can continue to vote for baby butchers and sodomite supporters. The homily you mention may have some link to the basketball player’s visit, but it’s not a very sharp connection. I heard Obama’s remarks after the meeting and of course it dealt with their mutual concern for the poor. That is exactly the kind of thing I was afraid would happen and I think that Obama probably is close to the truth in his description of their conversation. The pope should spend some time discussing the causes of poverty rather than trying to figure out the best ways to slice up what he believes to be a finite pie.