Wild-eyed rich liberal German Bishop from the extremely and wildly rich German Church and a symbol of that Church's rich and wild narcissism: 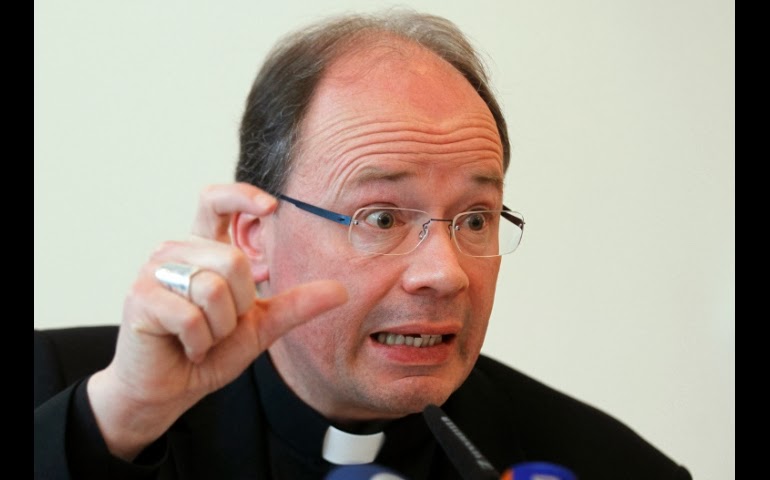 Given my post below and Pope Francis' praise of Pope Paul VI and Humanae Vitae as upholding the moral Deposit of Faith of the Church, this bishop in Germany, perhaps the wealthiest Church in Catholicism on the planet, and thus imbued with the morality of the wealthy and its narcissism, thinks the Church is wrong on its sexual morality:

The responses to the Vatican questionnaire on the family are a clear signal that certain changes concerning the church’s teaching on sexual morality are imperative, according to Bishop Stephan Ackermann of Trier, Germany.

Interviewed by the Allgemeine Zeitung Mainz, Ackermann, 50, said the responses showed “quite clearly” that for the majority of the faithful the church’s teaching on moral sexuality was “repressive” and “remote from life.” Declaring a second marriage after a divorce a perpetual mortal sin, and under no circumstances allowing remarried divorced people ever to receive the Sacraments, was not helpful, he said and added, “We bishops will have to make suggestions here. We must strengthen people’s sense of responsibility and then respect their decisions of conscience.”

It was also no longer tenable to declare that every kind of cohabitation before marriage was a grievous sin, and “the difference between natural and artificial birth control is somehow artificial. No one understands it I fear,” Ackermann said.

As far as homosexual relationships were concerned, the church would have to appeal to people’s sense of responsibility, he continued. “The Christian concept of the human being emanates from the polarity of the sexes but we cannot simply say homosexuality is unnatural,” he explained. While the church must “hold fast” to the uniqueness of marriage between a man and a woman, it could not just ignore registered same-sex unions where the couples had promised to be faithful to and responsible for one another.

Ackermann was sharply criticized by Bishops Heinz Josef Algermissen of Fulda and Konrad Zdarsa of Augsburg.

My Comment: This rich German Bishop of the Rich German Church is an American Episcopalian at heart and imbued with the secular agenda of the world which Pope Francis so often decries!

I agree with German Cardinal Muller Prefect of the Congregation of the Doctrine of the Faith and communicates regularly with Pope Francis: There will be no changes in the Church's Deposit of Faith and Morals when it comes to Sex, Marriage and Cohabitation. No change. The ideological rich German Church isn't going to call the shots!
Posted by Fr. Allan J. McDonald at Wednesday, March 05, 2014

This would seem to be the logical extension of any priest, parish, or diocese that modifies the execution of its mission to keep pews filled.