How in the name of God and all that is Holy did we get from this: 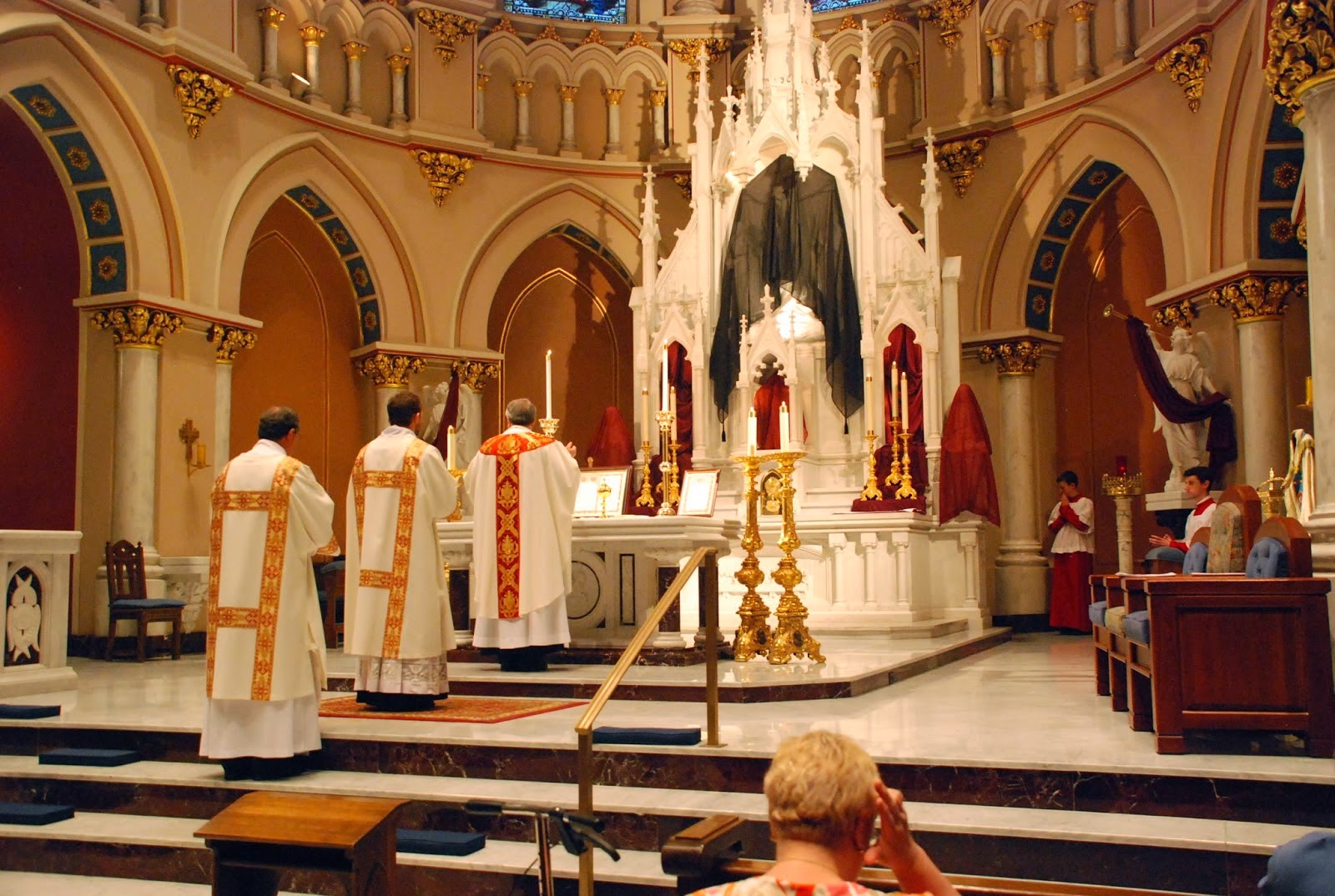 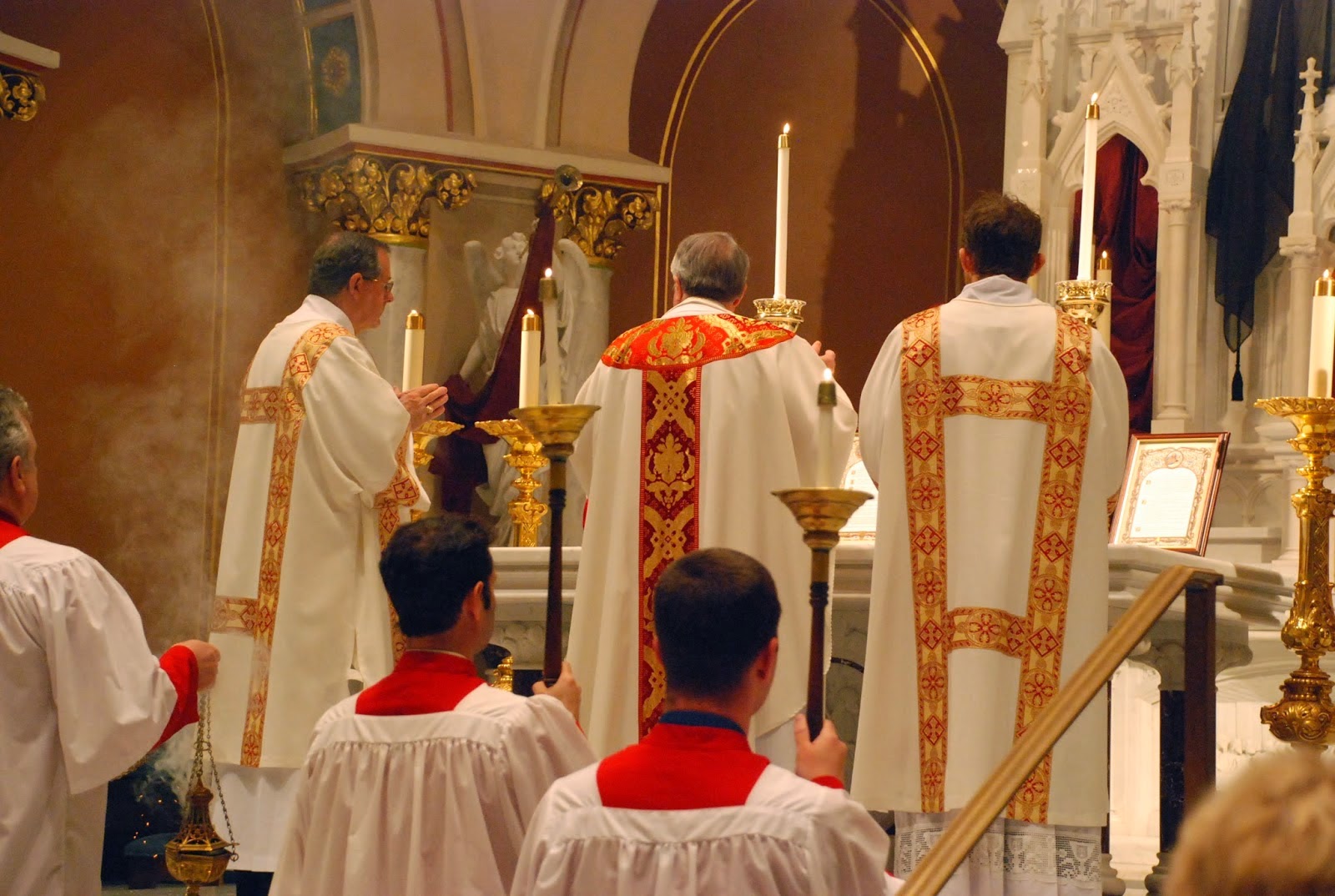 To this in Catholic liturgy? Did Vatican II really envision this? 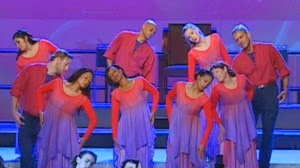 Tonight at Saint Joseph Church, Macon, we are celebrating the Solemnity of our patron, Saint Joseph, who happens to be the patron also of the Universal Church. We are celebrating it with the Solemn Sung Form of the 1962 Missal. It is said that this Mass has useless repetition and is not noble in its simplicity.

As I prepare to celebrate this Mass with deacon and subdeacon, I thought of the closing Mass in Los Angeles, the capital of world entertainment and how this entertainment mentality infected that Mass and so corrupted it. I had to think to myself that Sacrosanctum Concilium really did not forsee this form of the Mass when it asked that the 1962 Missal experience some adaptations, elimination of useless repetition and noble simplicity as well as an expanded lectionary.

But there will be things in common with our Solemn Sung Extraordinary Form Mass and that perverted and distorted form of it in Los Angeles. Let me count the ways.

1. The EF Mass will be sung; chanted is a better term. But what will be sung, as compared to the Los Angeles travesty will actually be the Mass. The Asperges will be the prelude to the Mass as all are sprinked with Holy Water as the schola sings the Asperges Me. Then the Mass will begin with the Introit in Gregorian Chant, the chant proper to the Mass in either form, as the priest and his ministers pray their private prayers at the Foot of the Altar to prepare themselves in the most spiritual and public way possible for what they will do at the altar as the priest acts in the person of Jesus Christ, Head of the Church. We will have two Latin motets as filler. One at the Offertory; one at Holy Communion and we will have an English recessional hymn in honor of Saint Joseph.

2. There will be liturgical dance in this EF Mass too, but choreographed in the strictest way possible with the detailed movements of priest, deacon, sub deacon and altar servers. It will be thoroughly Catholic and will not be confused with secular and pagan forms of dance that looks like a prelude to sexual intercourse in the animal kingdom.

3. The direction of prayer and worship in the Los Angeles event was directed in a horizontal way to the primary actors (acting in the sense of a Hollywood or Broadway spectacle)tonight's EF Mass will be completely vertical but in a horizontal sort of way. Everything will be directed to God the Father, through His Son and by the Power of the Holy Spirit. The clergy and laity will be contemplative, humble and not exhibit the least amount of pride or arrogance in their worship nor will it be narcissistic or ideological.

4. There will be a Catholic identity coming from the souls of the people actually participating in the EF Mass tonight and their common vernacular will be replaced by the sacred sounds of Latin, the universal language of the Latin Rite and all will be one in language offering to God their worship; none will be offended that their language isn't used. When people complain that their language isn't used, they usually complain from the point of view that the Mass prayers are directed to the laity rather than  to God. Again, a perversion of Catholic ritual in prayer which is directed to God alone, either silently or out loud but through Jesus Christ and by the power of the Holy Spirit.

5. Unlike the Mass in Los Angeles, there will be noble simplicity in the EF Mass at St. Joseph. There will be no dance simply for the sake of dance and quite useless in its complexity and repetition, there will be no superfluous movements to set the table and dance around it drawing more attention to what is placed on the altar and who is dancing compared to Who and What is remembered at the altar and there will be no applause, hoots or howls or "Rocky Mountain High" emotional outbursts or exuberance.

You are really quite witty. I like the way you put things in clear perspective without hostility, This was fun to read, but point well taken.

I just finished a book entitled "Mass Misunderstandings" by Kenneth Whitehead, a former career diplomat. The book starts with an explanation of the rationales for (and reactions to) Summorum Pontificum. The book then recounts the history of Sacromsanctum Concilium and the subsequent liturgical reforms, naming the actors, etc. As to SC, the book points out that every time SC speaks of preservation of traditional elements, such as Latin and chant, it always leaves an "out" for "competent authorities" (bishops) to do otherwise (they did otherwise and left the Latin and chant in the dust). The book recounts how John XXIII, most of the Roman Curia, and certain bishops (like Cardinals Spellman and Ottaviani) tried to preserve Latin, etc. while most territorial bishops, especially those from mission lands, wanted vernacular (the then Archbishop of Atlanta was among this latter group).

I'll never understand the American bishops hidebound decision to make the norm for reception of Communion standng, given our longstanding previous tradition of kneeling (and, yes, I've read of their reasoning for the change--I just don't buy it! I think they overread the differences of American culture---we still understand our European roots Plus, to kneel is biblical--it is not a medieval invention!).

Additionally, please read the good short article on New Liturgical Movement on how Cardinal Bernardin persistently (and, I think, illegally and underhandedly) got Communion in the hand approved for the United States, even though the preconditions for such an indult required that the practice already be in place in a country before it could be voted on and approved (one of the bishops called for a presentation of evidence on this and he was declared "out of order" by the Cardinal).

How did we get from "here" to "here"?---Some deliberate bad decisions by territorial bishops but, more often, by their lack of action and reliance on partisan "experts." I was very disappointed by what I read . . .

But all is not lost--watch that excellent homily by Archbishop Sample of Portland. It is a real shot in the arm!!

"And he said to them: An enemy hath done this."

Father when you look at the two different masses, it is hard to see how they are both the same religion. How is that disgrace in Las Angeles a rerepresentation of calvary? It is very sad and I believe the angels weep when things like that occur. Good job in having the Latin mass for the Feats Day. The angels that surround your sanctuary will be filled with joy.

I first came across Communion standing and in the hand on my first visit to Germany, aged 16, in 1967. I took it to be a local custom, but now know it was a widespread abuse in parts of Europe (particularly in Germany and the Low Countries). Not long afterwards it was legitimized by Rome (easier than trying to suppress it). When it was introduced in England in 1976 it came as something of a surprise; there was no popular demand for it. But the USA followed suit a year later, so the decision must have been made jointly by the Bishops' Conferences of the main Anglophone countries. It was put forward as an option but from then on altar rails were systematically removed, and a couple of years ago the Archdiocese of Westminster ruled that once rails were removed they could not be reinstated, and inserted into the GIRM that the norm for reception in England and Wales was standing and in the hand.

EMHC made their appearance in the 1980s. I remember one parish priest admitting to his congregation that many of them would be scandalized by the prospect. We now know that the main reason for their introduction was to give lay women a visible liturgical role.

Every liturgical innovation of the last fifty years has been foisted on a largely unwilling laity. I don't recall people saying: "Why can't we have services in English like the Anglicans down the road?" Even the Novus Ordo was sold negatively: "You're probably fed up with all the recent changes. But this will be the last one, and things will now settle down".