YES! "BUT THAT WAS INTERESTING" TO QUOTE THE ONE WHO SERVES TWO POPES AND THE ITALIAN IN ME IS THINKING ABOUT A NOVEL THE LIKES OF OPIE TAYLOR'S "ANGELS AND DEMONS"

This will make the Italians and those who lean in their direction gleeful in terms of conspiracy theories and who is the pope. Of course, I know who the pope is but my novel might make for good reading given all of the Vatican intrigue these last few years, earned and unearned, seen and unseen, visible and invisible! This is going to be delicious!

My story starts at the Vatican Motel 6 and the secret meeting of the two......(stayed tuned for my novel in bookstores everywhere on 6/6/16!)

This is from the AP this morning but already reported  many, many days ago on some blogs around the world: 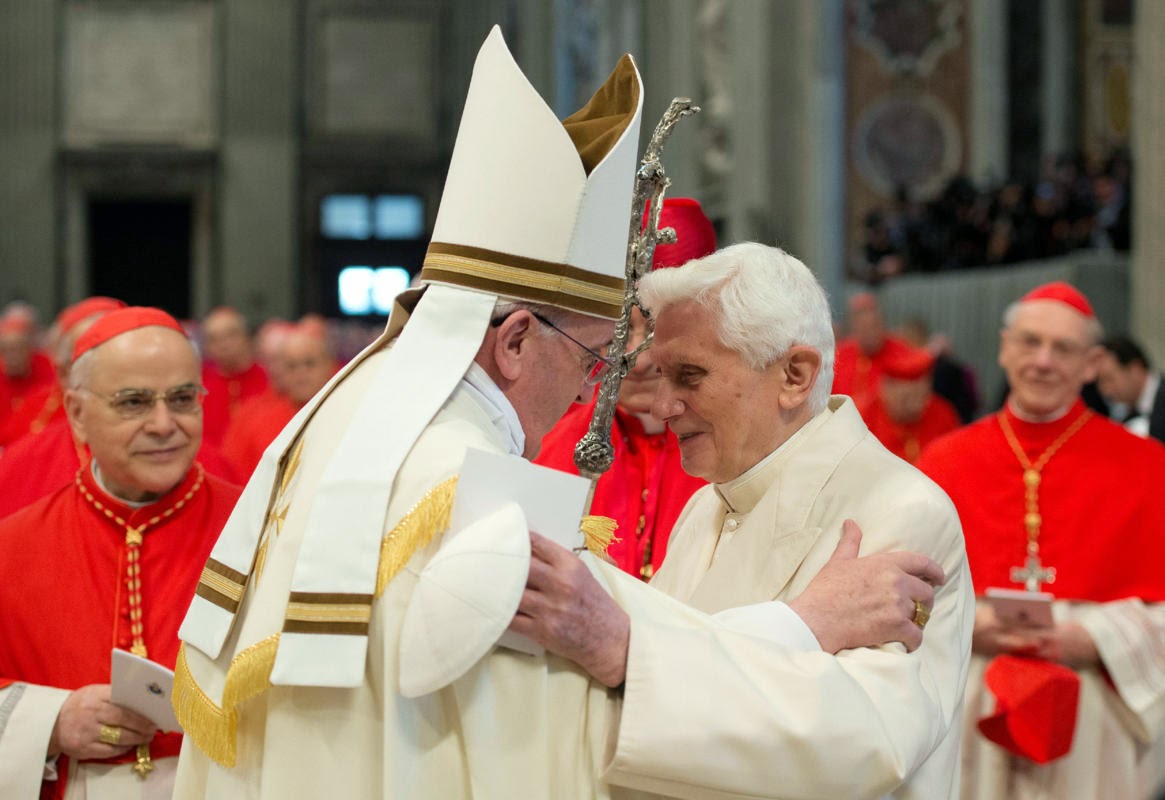 VATICAN CITY (AP) — The man who serves two popes has revealed that retired Pope Benedict XVI wrote four pages of critique and commentary on Pope Francis's landmark interview in which he blasted the church's obsession with "small-minded" rules.
Monsignor Georg Gaenswein, Benedict's personal secretary and head of Francis' papal household, told German broadcaster ZDF that Francis had solicited Benedict's input on the interview, which was published in September in 16 Jesuit journals around the globe and helped define Francis' agenda.

(Photo I took at the Closing Mass of the year of Faith, prior to His Excellency  personally greeting me and saying, "Ah, Savannah! In the United States!") 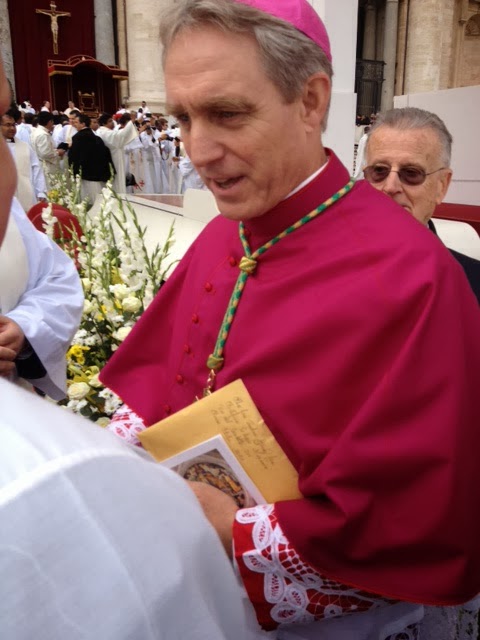 The Jesuit priest who conducted the interview, the Rev. Antonio Spadaro, said Tuesday that he gave the first printed copy of the interview to Francis on the day it was published. Francis gave that version to Benedict to critique, Spadaro told The Associated Press.
Though Benedict's comments had no impact on the published article, the revelation is further evidence of the remarkable and unprecedented collaboration between the two popes, who stay in touch by phone, in person and by sending notes back and forth across the Vatican gardens via Gaenswein.
Gaenswein told ZDF that Francis had given him a first copy of the interview to forward on to Benedict, and received a four-page letter from the retired pope three days later.
"He did his homework — he read it and, in accordance with his successor's request, he did indeed offer some thoughts and some remarks on certain comments or certain questions on which he thought something additional could perhaps be said in another place," Gaenswein recalled.
"Of course I won't say what, BUT THAT WAS INTERESTING" Gaenswein said.
Francis has said he relies on his predecessor's sage advice and has increasingly coaxed Benedict out of his secluded retirement to participate more in the public life of the church.
___
Geir Moulson in Berlin contributed.

Butah, Datah, Wasah, Interesting Ch 2
The bare light bulb hung from the ceiling of the laundry room, illuminating the everything in the tiny space with an intense glare or deep shadow that strained the eye to adapt or forsake seeing into the darkness. In contrast, the stoop of the laundry room was softly, almost invitingly, lighted through the broken doorframe. The old Argentinian walked into the room carrying his duffle bag of dirty underwear and soiled cassocks. As he filled the tub of the washer he pondered, for the 52nd time, whether it would be better to buy his clothes at the local second hand store or if he saved the difference in the cost because all of his washing was white.
As he turned the knobs of the washer to ‘Large Load’ and ‘Cold Wash’ the phone in his pocket rang the first two bars of Beethoven’s Ninth. The old man smiled as he answered.
“Buonasera, Papa!”
>”How are you, Francis?”<
“I am fine Holy Father. What may I… Please wait a moment, the ice machine is running. Let me step outside.” The washing machine also picked that time to engage, shaking dust from the cracked plaster of the ceiling.
>”You know, Bergoglio, you could bring your wash to my apartment and we could talk while you are waiting.”<
“Thank you Holy Father, but I like using the Hotel 6 laundry. I get to meet the other guests and you know how I like to ‘smell like my sheep’.
>”Then why bother doing your laundry?”<
The old man laughed hard for a full minute until he was gasping for breath. “Don’t make me laugh, Holy Father, you know I only have one lung!”
>Bless you, Jorge. I have some ideas about that interview you gave. Would you mind if I jotted some of them down and sent them over?”<
The old man’s face froze into the same blank stare that is on the face of a San Lorenzo forward watching the one thousandth replay of a wide kick on an empty net. “Certainly, Holy Father.”
>”Dear Francis, please don’t take this as criticism of you personally. Your love for our Church and her children is well known. But as you know so well, The Enemy whispers in their ear constantly to negotiate everything we say, to twist it into forgiveness without contrition. This is the time of year we consider these things. By the way, how is your Lenten devotion going for you?”<
“I ate a turnip today.”
>”The whole thing? Is Rome making you soft?”<
The old man didn’t laugh this time, but sat quietly. >”Francis? Are you still there?”<
“Do you think I am avvitare?”
>”Who am I to judge?”<
You could not see the tear in the old man’s eye as he began to chuckle. “Holy Father, my wash is done. May I bring it over to your place and let it dry on your balcony?”
“Of course, Francis. It is after sunset, so we can share some soup.”