POPE FRANCIS NOT SOFT ON DOGMA, REMOVES PRIEST FROM MINISTRY AN ACT OF GREAT PASTORAL KINDNESS TO THE CHURCH AND A PART OF HIS PROFOUND PASTORAL THEOLOGY AND STRATEGY 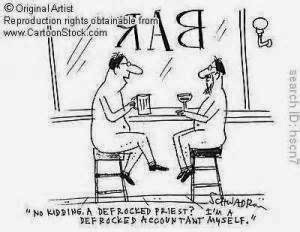 The National Chismatic Rag (NCR) is reporting (without my following accuracy) that a priest who sacrilegiously pretended to concelebrate a sacrilegious empty ritual wrongly referred to as the Mass, with a lay woman falsely impersonating  a high priestess, has been sacked by Rome's Congregation for the Doctrine of the Faith and with certain approval of Pope Francis.

Pope Francis isn't going to put up with this kind of dogmatic and religious corruption!

So, it took three years for someone to do something about this? Not encouraging.

'Though the mills of God grind slowly, yet they grind exceeding small'.

NcR has been told to remove "Catholic" from their name because they are disobedient. But because they are disobedient, they won't comply. That's what happens in the Church. Someone like LCWR or NcR gets in trouble but they ignore the sanctions. Someone like LC or FFI gets in trouble and they comply with the sanctions. But because of the disparity of response, it seems like the Church is only cracking down on conservatives.

Actually, the Church does crack down on everyone who harms her, be they the "conservative Pharisees" or the "progressive Heretics."

LCWR has been sanctioned for their "crazy talks and deeds," and NCR, despite their name and what they claim to be, is NOT a real Catholic publication, unlike, for example, America, which means the Church cannot force them to do anything.

Anonymous @2:36. What sanctions have LCWR suffered? Their last annual meeting still had new-age speakers going on about moonbeams and stardust. Did their oppressive supervisor nix speakers we've not been told about? Has anyone been expelled over support for abortion and women's ordination? It seems to me that their visitation has been a lot of noise to little effect,

Bernard, You saw that moonbeam crap, too. I nearly spit iced tea on my computer screen when I read that stuff. These people will never shut up unless they are made to do so. Unfortunately, most of the more efficient methods of shutting them up have not been allowed since about the eighteenth century.