HOW CONVENIENT ARE THE TIMES FOR CONFESSION IN YOUR PARISH?

“Wait for faithful in the confessional,” Apostolic Penitentiary tells priests 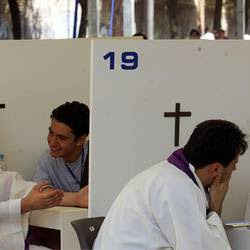 Major Penitentiary Cardinal Mauro Piacenza has warned that the Sacrament of Reconciliation is going through a crisis, particularly where confessors are facing a crisis

Priests should sit and wait patiently for faithful in the confessional at times that are convenient for penitents. Cardinal Mauro Piacenza said this this afternoon during the inauguration of the course on the inner conscience, the private inner space of each individual. The week-long course has become something of a tradition. It will be taking place in the Chancery office and attended by about five hundred priests and seminarists who are approaching ordination. The meeting will conclude Friday with an Audience with Francis. In the afternoon there will be a penitential liturgy in the St. Peter’s Basilica, when the Pope will confess some of those present, inaugurating the “feast of forgiveness”, during which churches will stay open 24/7 for confessions.

The Sacrament of Reconciliation “is possibly the most concrete and real way to renew one’s personal meeting with Jesus Christ,” Piacenza said.  Although it is true that the celebration of this sacrament often comes after a long and trying inner journey and is a destination one reaches after a previous personal Church-mediated encounter with the Lord, there are cases of radical conversions taking place during the very celebration of the sacrament. During this time, a supernatural grace acts through the confessor, working on the penitent’s conscience and can lead to brief instants of unimaginable spiritual highs.”

“When we deal with the inner conscience, what we’re dealing with is God!,” the cardinal said. “The conscience is a shrine where God always speaks to all humans in accordance with creation  and to Christians in accordance with creation and redemption… Accompanying a brother in the process of discerning his or her personal way of acting and receiving everything that emerges from the inner conscience, means entering into sacred territory with this person and one needs to be extremely careful when doing so. It’s like walking on silk.”

Piacenza invited confessors to prepare  for the celebration of this sacrament by “invoking the Spirito f prudence and wisdom, asking the Lord to be his obedient instruments” and to pause for a moment of prayer after confession “to thank the Lord for what he has achieved through our poor persons and always invoke the protection of the Holy Spirit and the powerful intercession of the Mother of Mercy on each of the souls that have renewed their personal encounter with Christ through us.”

“What all of us as well as penitentiaries of papal basilicas have noticed, is that the Sacrament of Reconciliation  is going through a crisis, particularly where confessors are facing a crisis. That is, where  the sacrament is only offered to “Catholic adults” who consciously ask for it and may even have the priest’s phone number at hand. But this risks reducing the sacrament to something individualistic  which has nothing to do with one’s personal encounter with Christ,” the cardinal said.

“The wisdom of the Church teaches us that [priests] should wait for penitents in the confessional, with that same patience that is typical of God.”
Posted by Fr. Allan J. McDonald at Monday, March 24, 2014

The normally scheduled time for Confessions at my home parish is, and has been for a long time, Saturday evening at 5:00 p.m.--the hour before the vigil Mass. This is nothing new here (though it may not have been continuous for over 100 years) as our 1912 Parish Directory (interestingly enough) also listed Saturday evenings as the scheduled time for Confessions (this was some fifty or more years before the advent of the Saturday vigil Mass).

At any rate, I certainly would find it far more convenient to have Sunday Confessions as I bring my family to Sunday Mass and I teach religious education, which starts at 9:00 a.m..

As an attorney, I wet shave and wear a "collar and tie" six days a week and get up early all of those days. Saturday is the one day that I don't shave and dress like a mechanic or farmer. I live 20 miles from town and I usually don't come to town on Saturday afternoons. This is my one day to just stay around the house or go out of town, if need be. Some would say I should "clean up" and come to Confession on Saturday evenings regardless. I just don't want to give up this one day and prefer to go at other times (Sunday mornings or weekdays and not on Saturdays). My Confessions would be far more regular and frequent if other opportunities were regularly offered.

At the FSSP Church I sometimes attend, Confession is before Mass. People line up along both side walls of the Church (2 Confessionals) while someone is leading the congregation in saying the Rosary. Very nice.

Before every Holy Day Mass, each Mass. And by appointment.

It's easier to offer confessions before each Mass when there are three or more priests. In one priest parishes, the confessor must stop confessions in plenty of time to get ready for Mass, thus sometimes disappointing penitents. In two priest parishes, one of the priests will occasionally have to substitute in other parishes, thus leaving his own parish with only one priest. That said, I do think offering confessions before each Mass is preferable, if at all possible.

I'm not sure how he did it, but the Msgr who took over a parish I had attended instituted daily Confession prior to 8 AM Mass. (30 mins) Also Confession is offered on Saturday morning and PM (45 mins)and Sunday prior to 9:45AM Mass (30 mins). Guess what?: When Confession was offered more, then more people went/go. I rediscovered that parish a few years after the pastor was appointed so I don't know if he promoted frequent confessions in sermons or if the fact that it was offered frequently caused people to recognize its importance. There's been no drop off with the appt of the new Msgr who has maintained the same schedule.

Sadly at my parish when ever one of our retired priest is celebrating Mass they never seem to want to hear confessions or they forget and show up 10mins before Mass.

At some of our parishes they have there confessions after Mass which doesn't make too much sense.

It would be wonderful if they would hear confessions every day before every Mass but that's too much to ask for.

At my traditional parish, we have confessions twice a day every day with a third time for confessions on Fridays and Sundays. Our priests expect us to confess at least every two weeks, so we can gain plenary indulgences

There are two "personal parishes" in my neighborhood, a Polish one and a Slovak one (the Slovak one also has the EF every Saturday night at 6). Both parishes have confession a half hour before EVERY Mass, 7 days a week. The regular diocisean novus ordo parishes only have one confession per week, except during Lent and Advent, when most will schedule several communal reconcilliation services.

I highly sympathize with the constraints and demands for their time that priests labor under, but one where I cut them no slack and want to hear no whining is regarding the availability of confessions.

Every priest should spend thirty minutes every single day in the confessional.

Every. Single. Day. No exceptions, ever.