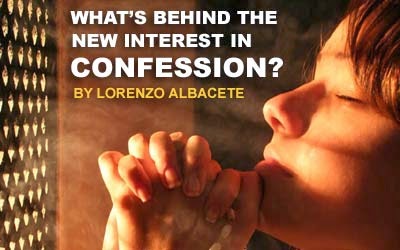 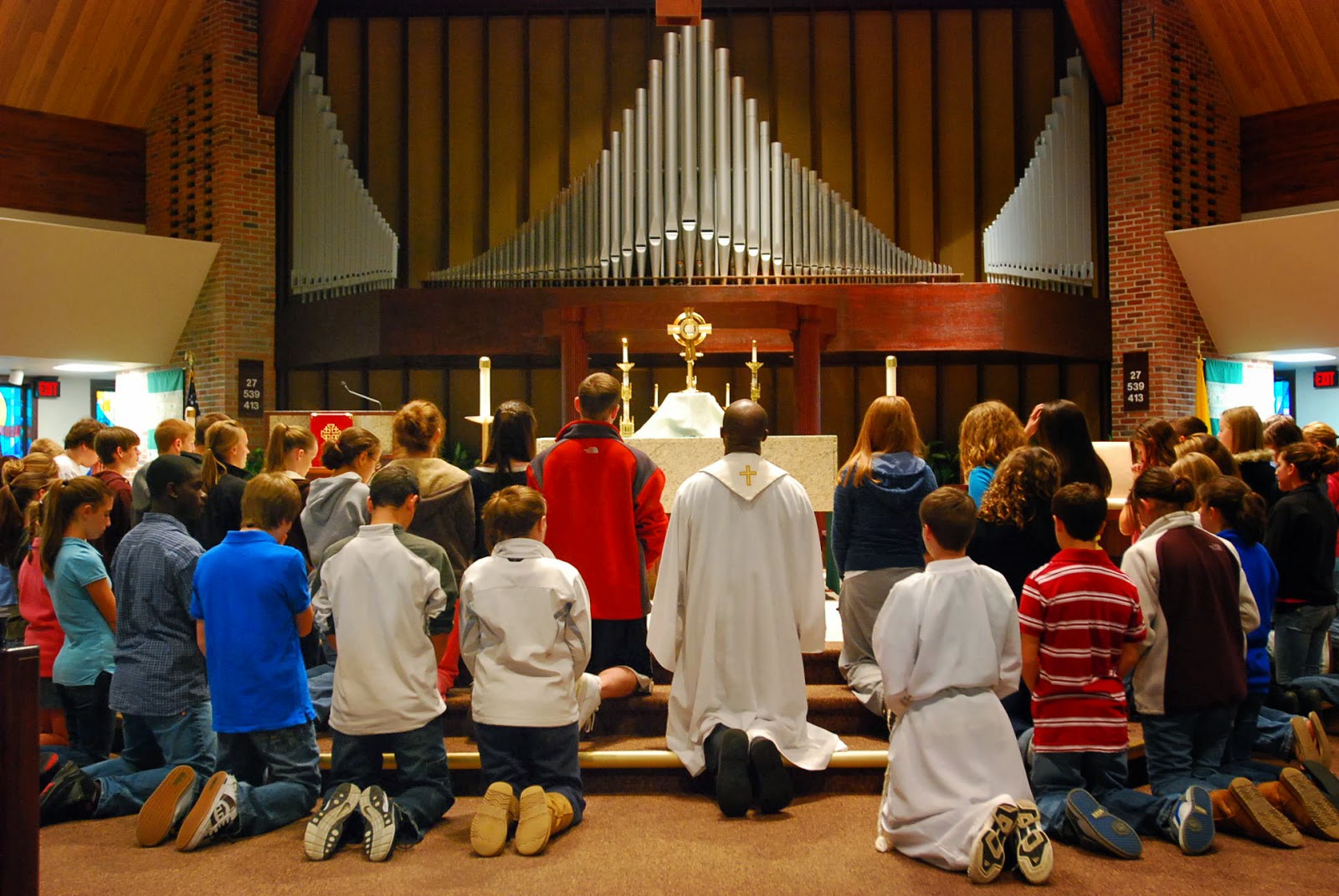 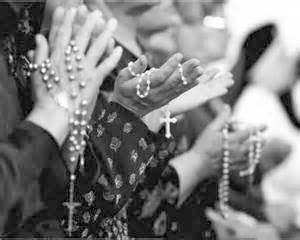 As I have written before, Pope Francis' expression of the "reform of the reform in continuity" focuses not so much on the liturgy as Pope Benedict did, but rather on the Sacrament of Penance, a recovery of the sense of sin, the need for repentance and conversion  and the need to ask for mercy and then to offer mercy, sacramentally and otherwise.

He also is focusing on devotions, especially Eucharistic Devotion, the King of all devotions. Certainly Marian devotions come next in the hierarchy of devotions.

I am convinced that if people recovery a sense of sin and the need for Confession and the love of Divine Mercy, the will recover a sense of the sacred that has been lost.

If people recover the need to pray at home and at other times apart from Mass with popular devotions, they will recover the need to be at Mass on Sunday and this combined with a recovered sense of the sacred will enhance the Mass and its "reform of the reform in continuity."

The following article from Kathnews is not a good English translation from the German original, but you get the point:

Vatican (kath.net / pl) "24 Hours for God", ie the initiative of the Pontifical Council for Promoting New Evangelization for the 28th and 29 Of March 2014. Worldwide is called to confession and eucharistic adoration. Even Pope Francis will participate, he is on 28 March conduct a prayer service at St. Peter's Basilica and personally hear the confession.
Also parishes of the Roman city offer events.

Archbishop Rino Fisichella, Prefect of the Pontifical Council for the New Evangelization, expressed in relation to the Italian newspaper "Avvenire" and shows "pleasantly surprised by the enthusiastic response" that would be reported back to him from all over the world. Many bishops have welcomed the initiative. Especially "the confession is attracting more and more people," she help them to make the "experience of grace and love of God"  Fisichella said.

Also out of the church in Germany first events were already known in response to this call. The diocese of Essen has his homepage out : "Ruhr Bishop Franz-Josef Overbeck welcomes the initiative of the Pontifical Council for Promoting the New Evangelization, during this year's Lenten season to promote the Sacrament of Reconciliation in a special way."

Vicar General Klaus Pfeffer wrote in a letter to all pastors, that it planned no diocese-wide project. The Vicar General suggested it "expressly" to, "the initiative of the Pontifical Council in the projects of the parishes involved, or to connect with already planned worship services".

The diocese of Mainz invites to the "24 Hours for God" in the parish church of St. Boniface / Mainz one.

The Episcopal Youth Office of the Diocese of Passau points to several events. The branch of the youth ministry, the Church Youth Bureau parish invites you to Passau in the Votive Church, in Altötting in the Collegiate Church of St. James and Phillipus and in Grafenau in the parish church of the Assumption.

Also, in the diocese of Trier an event on the Internet has already been made ​​known: the Benedictine Abbey of St. Mauritius Tholey engages the concern "24 Hours for God" and provides for Confession and Eucharistic Adoration on how the parish community Schaumberg are known online.
Posted by Fr. Allan J. McDonald at Tuesday, March 18, 2014

On Sunday I talked for an hour with a priest I have known for three years and with whom I have had some interesting discussions. I admitted to being somewhat perturbed by what I consider to the mixed messages emanating from Rome during the current papacy. He has a great admiration for Benedict XVI but remarked that Benedict, like most German theologians of the 20th century, was reluctant to mention the Devil in person whereas Francis has done so often. This got me thinking. Some of the Pope's reported utterances may be grist to the mill of liberal commentators, but his mindset is that of a conservative Jesuit. If one listens to his homilies one gets the impression of someone who knows what he wants to say and can do so in ten minutes, leaving his listeners with food for thought.

The cardinals did not pick this man because they thought it was time that Latin America had a shot at the papacy; they believed he had the ability to proclaim the Truth to an increasingly irreligious age. Time will tell, and Francis's balancing act might not work, but Jesuits are renowned for their subtlety and preparedness to accommodate, although this has in recent years led them into heresy.

Francis's lifestyle might be ostentatiously simple, but don't be fooled. He's in charge, and he knows it. We shall see the results in two to three years' time.

If he is concerned about the reform of the reform why does he not free the Franciscans of The Immaculate from their prison cells??????

The debacle Rome had with the Legionaries of Christ and with several pontiffs until Benedict tells me that we have a Pope that isn't going to put up with financial or sexual garbage from any leaders of any order. What he has done is marvelous and I'm happy to wait and see!

Francis is obviously setting the stage to say that divorced "remarried Catholics" have no need of confession. He is basically going to teach that Christ's words can be ignored and people can receive Holy Communion in a state of mortal sin. He is going to rationalize mass sacrilege. So why does anyone need to go to confession. And please don't say he isn't planning this. Francis must know that this is the perception going on around the world and he is doing nothing to correct that impression.

I really have a hard time believing that Francis will actually go through with the admittance of the div./remarried to resolve the Eucharist. I'm really starting to see where trusting in the Holy Spirit and praying/fast are coming in now, that's sure as heck what I'm doing.
IF it does occur and dogma changes, my guess is that it will cause millions of people, including me as a convert, whether or not Catholicism is what is says it is. If Francis is the first pope in 2,000 years to change Church doctrine, he is no longer the pope (as per canon law?)

As I've said before, I will wager a large bet that the pastoral solution for divorced and remarried Catholics will be, as it is now, the annulment procedure that will be user friendly, not require as many witnesses and an expansion for the grounds of annulment.
The internal forum, which has been used for about three generations now will be clarified to eliminate the confusion surrounding it.

It would have helped if the Kathnews article had bothered to explain exactly what this initiative is. One can guess, but one shouldn't have to do so.

There will be no measurable attendance change in response to any liberalization of divorce issues within the Church. Where is the evidence that the Church's position is causing people to stay home? What I've noticed at Sunday Mass is that no one refrains from getting in line to receive the Body of Christ in their precious little hands. That group must include those who are living in invalid marriages. Our problem is a general lack of respect for Holy Communion and that there is nearly no visible instruction on the rules of being eligible to worthily receive. Rather than solving that problem we are going down a path of creating a solution to fit an invented problem. There is no shortage of annulments in this country which substantiates that anyone who has serious commitment to the Catholic faith has adequate access to the remedy that already exists. The plan that seems to be baking in the Vatican will add to undermining respect for the Blessed Sacrament and there is little capital left in that account.