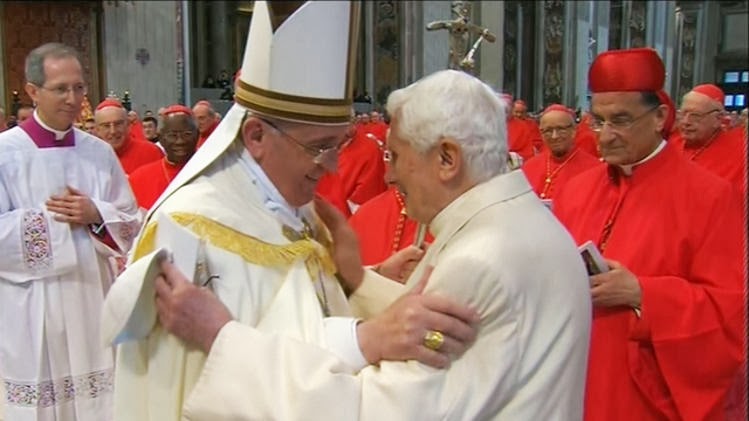 The Pope’s wide-ranging conversation with the veteran journalist covers themes from bioethics, to styles and modes of Church governance, to his friendship with and esteem for his predecessor, Pope-emeritus Benedict XVI.

The following are snips of article I found on the internet. I am sure the complete interview will soon be released in English:

Some of the strongest remarks concerned the role of women in the Church. “It is true that women can and ought to be more present in the places where the Church’s decisions are made. This, however, I would call a promotion of a ‘functional’ type. Only, in this way, we do not get very far: We need to consider that the Church takes the feminine article,” he said, “She is feminine in her very origins (It. dalle origini).” [My comment: Clearly this has ramifications for the Church's dogma about the all male priesthood (the Sacrament of Holy Orders) and the Sacrament of Holy Matrimony as being one man and one woman and a reflection of Christ the male Bridegroom and the Church, the female bride.]

Asked whether it might perhaps be time to take up once again the question of artificial means of birth control, Pope Francis praised his predecessor, Paul VI, who authored the encyclical Humanae vitae, saying, “His genius proved prophetic: he had the courage to stand against the majority, to defend moral discipline, to exercise ‘brake’ on the culture, to oppose [both] present and future neo-Malthusianism (a view or doctrine advocating population control, especially by contraception). The Holy Father went on to explain, “The question is not that of changing doctrine, but of going into the depths, and ensuring that pastoral [efforts] take into account people’s situations, and that, which it is possible for people to do.”

In an interview with Italian daily Corriere della Sera, Francis said he doesn't appreciate the myth-making that has seen him depicted as a "Superpope" who sneaks out at night to feed the poor. On Wednesday, a new Italian weekly hit newsstands — a gossip magazine devoted entirely to the pope.


Francis said: "The pope is a man who laughs, cries, sleeps calmly and has friends like everyone else. A normal person."

Francis also said he and Pope Benedict XVI had agreed that the emeritus pontiff would "participate in the life of the church," in keeping with Francis' belief that the elderly shouldn't be hidden away in homes when they have a wealth of experience to offer.


Pope Francis has defended the Catholic Church's record on tackling the sexual abuse of children by priests, saying "no-one else has done more" to root out paedophilia.

"The Catholic Church is perhaps the only public institution to have acted with transparency and responsibility. No-one else has done more. Yet the Church is the only one to have been attacked," he said in an interview with Il Corriere della Sera daily published Wednesday.

Last month, the United Nations denounced the Vatican for failing to stamp out child abuse and allowing systematic cover-ups, calling on the Church to remove clergy suspected of raping or molesting children.

It accused the Vatican of systematically placing the "preservation of the reputation of the Church and the alleged offender over the protection of child victims" -- an accusation which was heatedly rebuffed.

The Argentine pontiff, who will celebrate the one-year anniversary of his election on March 13, said in the interview that the abuse cases "are terrible because they leave very deep wounds."
"The statistics on the phenomenon of violence against children are shocking, but they also clearly show that the great majority of abuses are carried out in family or neighbourhood environments," he said.

Francis praised his predecessor Benedict XVI -- the first pope to apologise to abuse victims -- saying he had been "very courageous and opened up a path" to changing the Church's attitude towards predatory priests.

Francis himself has said Catholics should feel "shame" for abuse. In December he created a commission to investigate sex crimes, enforce prevention and care for victims.
Posted by Fr. Allan J. McDonald at Wednesday, March 05, 2014

Stunning? Bombshell? Prophetic? With no critical intent whatsoever, it seems to me that Pope Francis merely reiterated the bare minimum of core Catholic doctrine (on these subjects) that any pope must affirm.

Though I understand that your hyperbole is directed toward any PrayTell types following this blog. But I wonder if any are left.

Yes, the hyperbole is that so many, and not just praytell readers, but traditionalist Catholics don't think Pope Francis is Catholic or orthodox. He is, but he is pastoral and walks the balance between upholding orthodoxy and being pastoral.

Here we go again. Now the media is reporting that Francis is going to allow homosexual unions. I can't even think about this pope anymore. I've had enough. I'm not getting upset or going crazy. God will take care of him. Francis is on his own let God deal with him, it never ends with this man.