SHOULD ALTAR RAILINGS BE RESTORED AND USED? YES--BUT WHICH STEP SHOULD IT BE PLACED UPON? WHEREIN I MUSE!

An excerpt from a post I wrote in the Year of Our Lord 2015:

For the most part, the altar railing, aka, Communion railing, is installed but not completely. The center gates and side gates have not arrived and will be installed shortly. The restoration of this railing uses a goodly amount of the original altar railing installed in 1903 with new pieces added and is in fact longer than the original which went between the main sanctuary and side chapels which you can see in this photo from the 1990's and below it shortly after 1903: 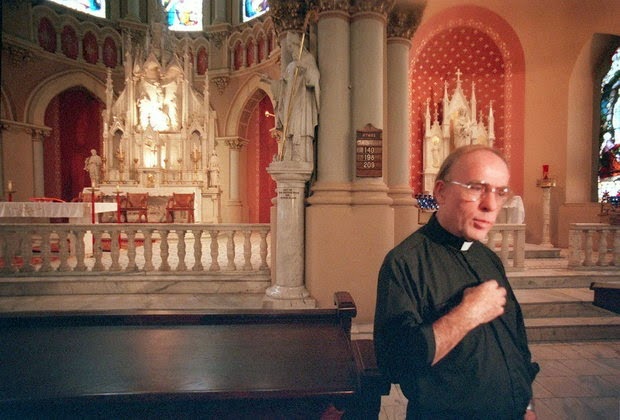 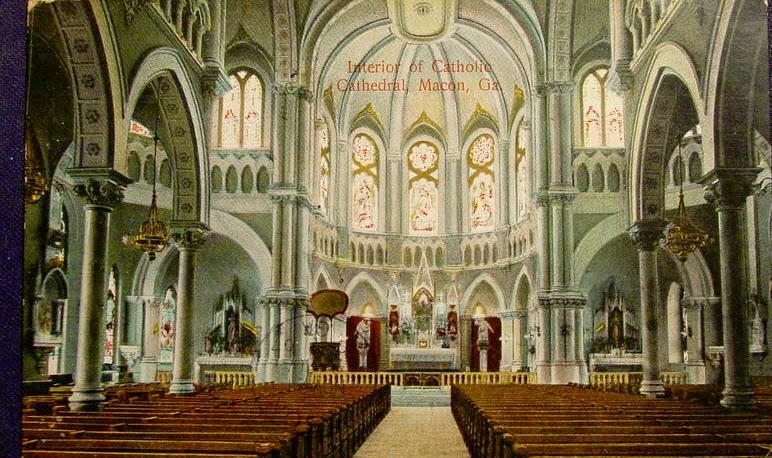 Most people, meaning liturgists, who are less pliable than terrorists, ripped out altar railings because they proclaimed an ideology that it was like a "fence" fencing the altar off from the downtrodden laity. It was a barrier to the laity and made it look like that the sanctuary was more important than th nave and blah, blah, blah, blah!

But when I restored it, thanks be to Pope Benedict XVI and Summorum Pontificum, I did not restore it to the same location as you can see in the photo above with the former pastor standing in front of it, Msgr. John Cuddy, now deceased since last year but pastor their from 1974 to 2004 and pastor emeritus once I came in 2004 until he died in 2017. But I digress.

As at our Cathedral today, the altar railing at St. Joseph was three steps up which made it difficult for elderly people, like me, I just turned 65 yesterday, to approach and God-forbid, if the communicant forgets when he stands up to return to the pew there are three steps below him, this is a recipie for a bad fall, life threatening injuries and even death!

At the cathedral there are adult altar servers positioned in the nave before the railing to assist older people to come down the steps.

When I restored the altar railing at St. Joseph, in the Year of our Lord, 2015, I moved it to the first step leading to the sanctuary, not the third.

What say you about the position of the altar railing?
From 2015 AD but still awaiting the brass gates: 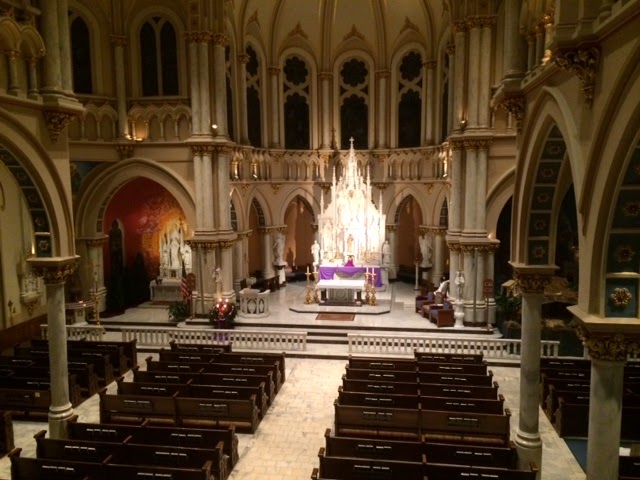 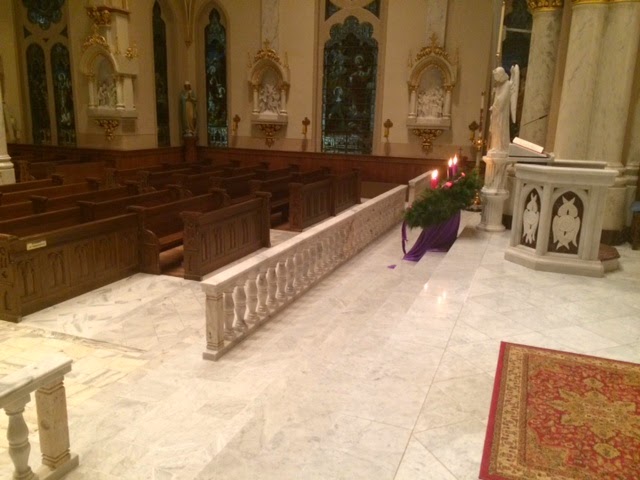 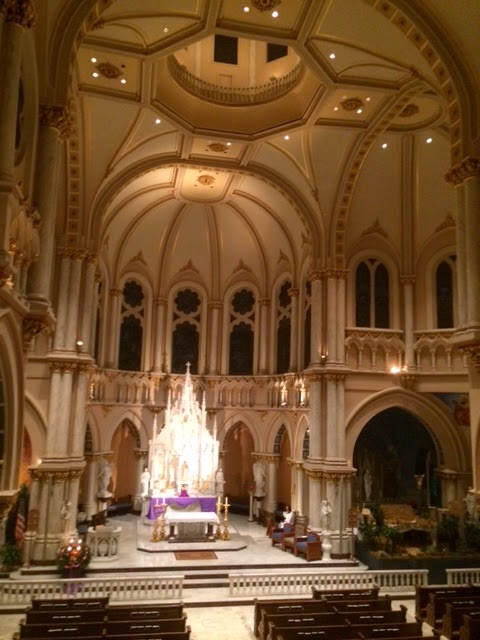 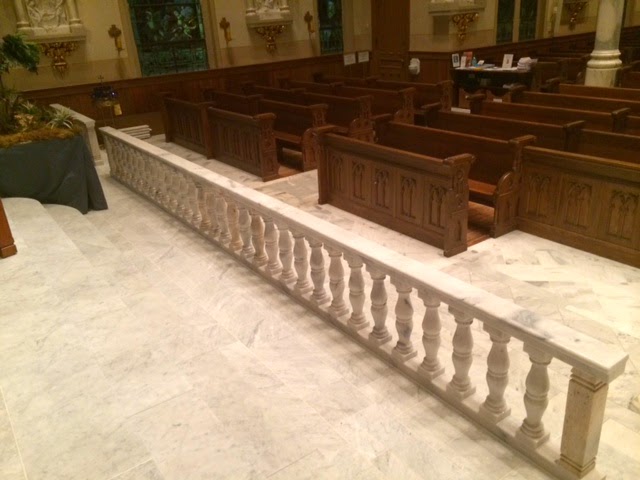 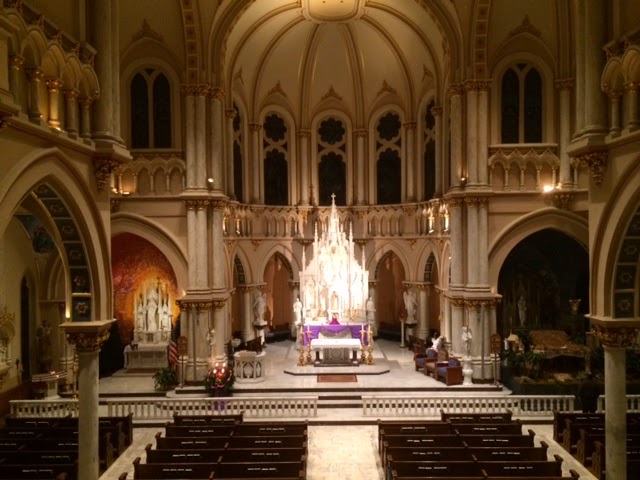 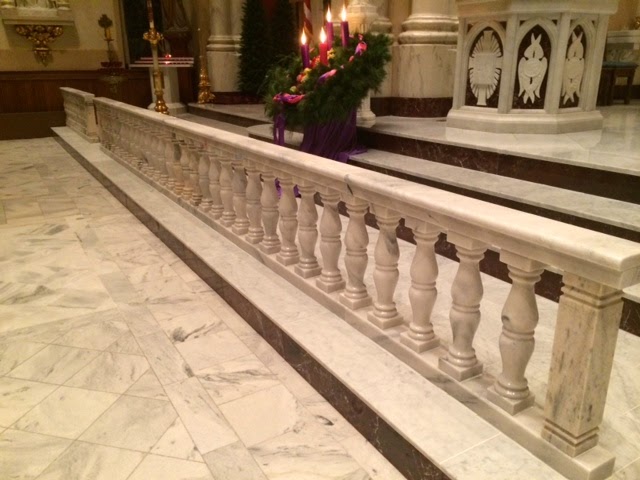 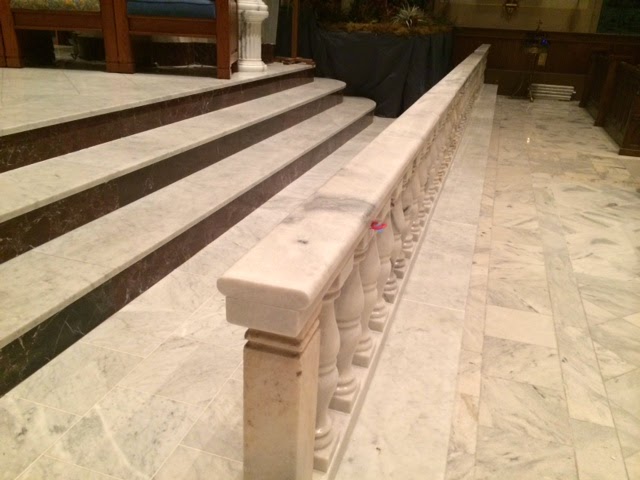 well for those who use walkers and canes, this is a very pastoral solution!

However, I would be curious to know if there were any regulations regarding the placement of the communion rail

The local archbishop here invited the FSSP a few years ago and gave them a church. It is a beautiful large old French style church, but the Vatican II vandals had done their massacre on it. The handcrafted communion rail inlaid with exotic woods was gone, but at least the magnificent high altar was more or less intact. Last year, craftsmen were commissioned to build and install a communion rail replicating the original. With all the other repairs, structural and cosmetic, big bucks are needed to restore the church, but through God's grace, the mission is growing rapidly, unlike the Novus Ordo churches in the city which have closures every few months.

every one that I have ever seen (before they were trashed)or still exist, were always on the bottom step, otherwise I believe communion could be a problem as you mention. However these are all country churches except one

That was a sad period in Church history, when looney left-wing ideologues destroyed the patrimony created through the penny donations of Catholic parishioners without batting an eye. Sick, twisted people.

Victor, that is good to hear. Our communion rail was still in place, but at the top step and was recessed enough that it was a hazard for many of the elderly parishioners. Our newest pastor moved the rail forward to make it safer for these people. There was a severe reaction that I didn't anticipate. It seems the altar rail has become a symbol of the division between the TLM supporters and the NO crowd. Moving it forward just a few inches, not even down a step, was threatening to many.

(Sorry to double post) Egyptian, Our Altar Rail at Holy Family in Dayton is on the top step. It was pretty tough for the old folks to mount one step and kneel on the next step up. But our entire church is a series of steps and difficult to get in or out for people with physical limitations, or even a gimp from Saturday's softball game.

I believe you live near Dayton, so please come by for Mass some time and I'll show you around. It is an interesting study in the charm and beauty of an old style uninformed by ergonomics.

On this day in 2009, you shared with us an article on sexual abuse and renewal of the liturgy. I thought we were getting the abuse under control back then, and that the liturgy was finally being renewed. I was rather idealistic and naïve back then. http://southernorderspage.blogspot.com/2009/12/catholics-grapple-with-divisions-over.html

Those who wanted altar rails removed were following in the footsteps of 17th century puritans. During what is inaccurately called the English Civil War, when Parliament's soldiers occupied a town they tore out the 'popish' rails which had been part of the Laudian reform of the Church of England.

And since rails are at the forward edge of the sanctuary, they are normally one step up, the step being used for kneeling.

If it was a crime to destroy the patrimony of the Church most bishops and priests would be in jail.

I've always seen altar rails on the first step with a walkway, solea in the east, behind to facilitate holy communion. Until the Roman Church re-embraces its patrimony consistently, fiefdoms promoting division will remain the order of the day.

Further to my last comment, what did all these wreckovations accomplish? Tremendous amounts of money was wasted, churches became barren, inconsistencies abounded, pedestals, niches and eucharistic towers became commonplace in all their out of scale blandness. Most importantly, the churches emptied.

Last, 'Anonymous' will lecture that it is not about the externals but, those very externals that became anathema to some, provided a consistent experience and atmosphere wherever one went in the world. I therefore think their value for permanent structures cannot be discounted.

One more point, years ago, churches, particularly the sanctuaries, were designed employing an algorithm to consider the length of the nave/number of pews and how elevated the sanctuary should be as a result...so people could see. Perhaps that is why the altar rail at your cathedral is elevated. The lithograph, to me illustrated this as the altar rail and critical furnishings are not hidden by the pews in the nave.

As a wheelchair user, I prefer the setup as it is now. Easier for the priest to reach. Haha.

I suspect there was a "rule" about the location of the altar railing. St. Charles Borromeo, I think, wrote a set of regulations about the constructions of churches, spelling many things out in detail. (John Nolan, does this sound familiar to you?)

Among the rules were 1) a rectory and Church should not share a common wall - many sacristies separate the two buildings. And 2) the footpace - the space in front of the altar where the priest would walk - was to me made of wood, not stone or marble, lest the priest slip on the slick surface whilst celebrating mass. The side altars in our cathedral in Savannah still have the wooden footpaces, although they are now covered with Persian-style carpets.

I understand that Carlo Borromeo drew up rules about the construction and ornamentation of churches in the counter-reformation Tridentine style. But his strictures are no more or less valid than those in the current GIRM. The medieval gothic church with its rood screen, or the baroque church with its altar rails, hosted the same liturgy.