TO PREACH OR NOT TO PREACH, THAT IS THE QUESTION 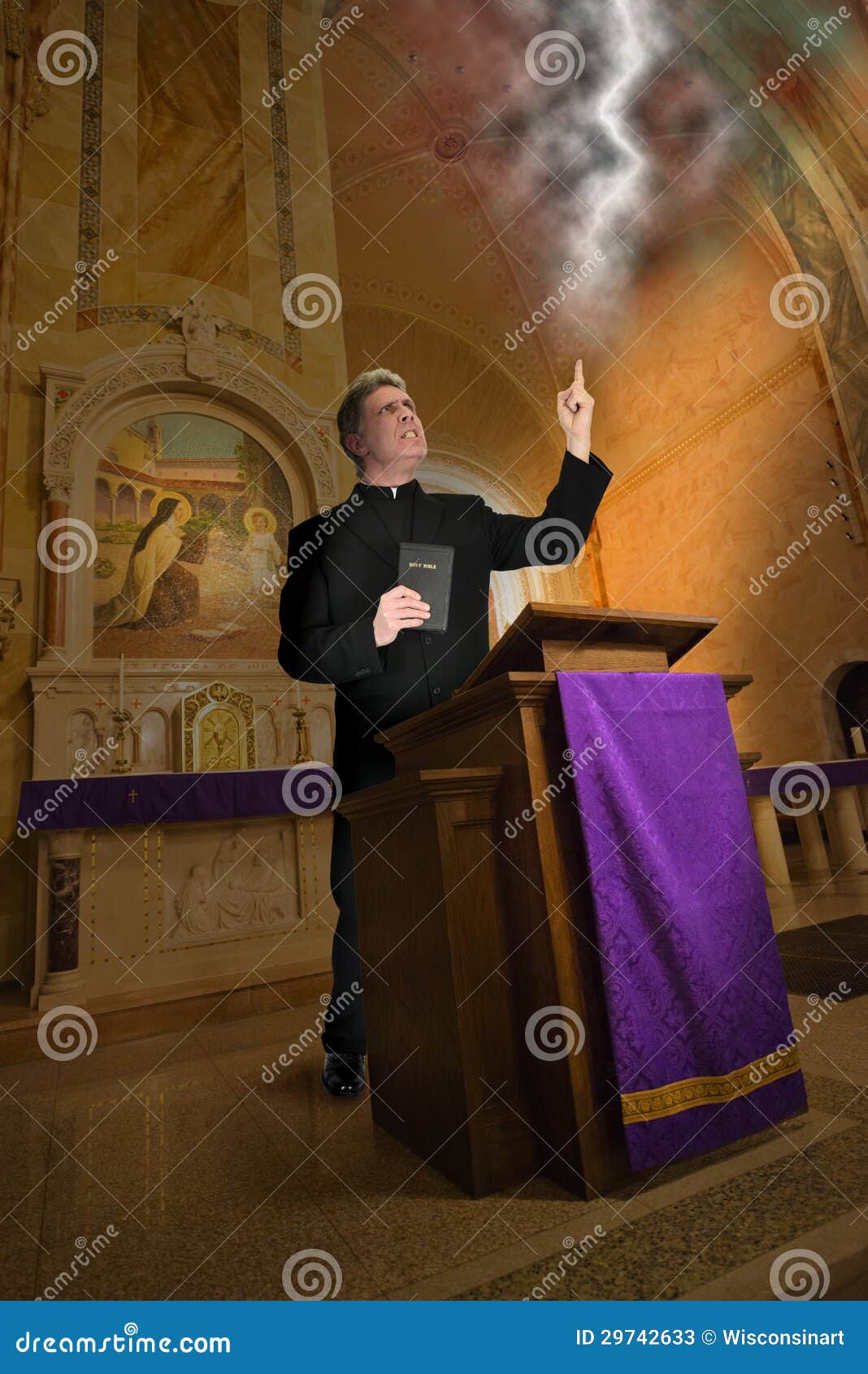 I would question whether a homily (essentially the priest's own take on things) should be allowed to interrupt the funeral Mass in the first place; in a traditional Requiem it isn't.Letting the liturgy speak for itself seems to be an alien concept to the postconciliar generation of priests. So at Mass we have so much explanation that the main purpose of the liturgy would appear to be didactic; even weekday Masses are rarely allowed to proceed uninterrupted; one even finds a homily at Vespers.I appreciate a good sermon on a Sunday, provided it is well prepared and doesn't take too long. But I don't go to church to be preached at.

MY WORD OF GOD COMMENTS: I did not know that homilies/sermons were not offered in pre-Vatican II times. That seems very alien even to me.

Some might recall that in many churches after Vatican II, the real Presence of Christ in the tabernacle was moved from the center high altar to a side altar and the word of God was enthroned on the opposite side altar, because of the real presence of Christ in the Bible. Some though would enthroned the Book of the Gospels on the old high altar after reading the Gospel.

I do not give a homily at our Tuesday Low EF Mass, although I do at our daily OF Mass.

Is elevating the priests words during the homily, no matter how banal, pastorally insensitive or just plain heretical something that has led to priestly liturgical narcissism and elevated the personality, looks and antics of the priest to be the shining STAR 🌟 of the Mass, Requiem or otherwise?

And now that priests can be vilified so easily in order to remove him, does the homily become a shooting star 🌠 like a clay pigeon being shot at by the laity?

I have never thought of a funeral homily, or any homily, as "my own take on things."

Unfortunately, many homilies give the "Father Entertainer" types a captive audience to push their take on things instead of the scripture readings.

The pre-V2 Requiem rarely had a sermon. It was not about preaching or about being "pastoral" to the congregation. It was about begging God's mercy on the soul of the deceased. The Requiem Mass speaks for itself, that is, it prays to God from beginning to end for the deceased. The atrocity created after V2 is always about the people in the congregation, as if the Church were a mere social club.

Fr K., so THAT explains the horns of light emanating from our pastor’s head. I thought it was merely the commentary and exhortations of our lowly priest who sometimes, due to boredom or gaps in his education, linked his pet political or social theories to the readings or maybe just ignored them. In all seriousness. I usually dread the homily because as often as not it seems more like an interruption to the Mass than a part of it. In the case of a requiem the risk of confusion or offense seems to great to chance.

Before Vatican II a sermon was preached at Mass on Sundays and Holy Days. There was also far more preaching outside of Mass where the preacher had more time to develop his theme. Most parishes had 'Rosary, Sermon and Benediction' on Sunday afternoons; it was also an occasion for singing hymns.

Nor is preaching a Protestant concept - in pre-Reformation times sermons attracted such large crowds they had to be held outdoors. The Dominicans are the 'Order of Preachers'.

But the idea that the 'homily' is part of the liturgy, rather than an interruption of it, is a modern conceit, and when Mass is celebrated according to the 1962 Missal the priest removes the maniple, and in some places the chasuble, to indicate that the liturgy is suspended at this point.

In the traditional Roman rite, a sermon following the Gospel is considered an interruption of the Mass, rather than a part of it. That’s why traditionally oriented priests remove not only their maniple but also their chasuble (as did ours today and every Sunday) —priestly garments for offering sacrifice—and don their biretta before procedinging to the pulpit to preach. (And then remove the biretta and don the chasuble and maniple again following the sermon before proceeding with the Sacrifice of the Mass.)

As at a solemn high Requiem Mass I attended in 2008 for John Paul II (on his 3rd anniversary) conducted by the FSSP at the Shrine of the Most Blessed Sacrament (Mother Angelica's) in Alabama. It being an EF Mass for the dead, no word in the vernacular was either read, said, or sung during Mass proper.

But after the Mass and before the blessing at the black catafalque topped with papal red, the celebrant removed his chasuble and donned the black cope hanging in the sanctuary, lit candle on one side, processional cross on the other side, signifying the deceased pontiff, and mounted the pulpit for his "tribute", which never until the last two sentences mentioned the deceased, instead outlined why the solemn Requiem Mass is the most impressive (and expressive) of all Catholic liturgies, dealing directly as it does with death as the wages of sin -- after which each of us can expect judgment followed by either purgatory or hell -- with the sole and undiluted purpose throughout of offering sacrifice for the repose of the soul of the deceased. He ended by saying (very closely, as I recall):

"Perhaps someday we will be privileged to pray to John Paul as Blessed. But today we pray instead for the repose of his soul, that he may in time be permitted to join the ranks of the blesseds."

He probably envisioned this happening within perhaps a century, little realizing how rapidly the very meaning of the words “beatification” and “canonization”—which at that time still signified the results of very rigorous investigative processes—within our own lifetimes.

rcg - If the preacher is doing it well, the homily, an integral part of the celebration of the Eucharist, should not come off as an interriuption.

rcg - If the preacher is doing it well, the homily, an integral part of the celebration of the Eucharist, should not come off as an interruption.

I know that some don't do it well. Preaching is something that I enjoy and get great satisfaction from. Others find it a tremendous burden and, despite the best efforts of seminaries and preaching workshops, don't develop the skill.

A good, brief article on the Catechism and preaching is here:

I remember a pre-Vatican II Sunday homily when I was about seven or eight years old. It was an extremely hot summer morning and the priest came to the pulpit and merely said, "You think today is hot? Hell is hotter." and then he resumed the Mass. :-)

Traditionally the collection at the Christmas Masses is a personal gift to the priest(s) of the parish. I remember one Christmas morning the celebrant at the London Oratory's Solemn Mass thanking the people in advance for their generosity and announcing that as a reciprocal gesture he would spare us the homily.

A typical Novus Ordo would include:

The priest gives a brief introduction to the Mass of the day. This normally means telling the people what they are going to hear in the Scripture readings.

The readings are then delivered in the vernacular.

The priest in his homily tells the people what they have just heard.

The rest of the service is quite short, since he will use EP II to save time.

For protestants, the preaching of the Word is the primary Sacrament. Sermon preparation, therefore, should be undertaken prayerfully and with proper Christology in mind. The preacher should remember that, in Paul's words, we are the vessel and not the treasure.

John that wonderful Christmas tradition of Christmas collections was prevalent in larger northeast dioceses of New England (with large Irish American populations) but sadly never in the southern confederacy. I think for the most part that tradition ended even in New England in the 80's.

And yes there are multiple homilies in the NO by some priests. Ridiculous.

Lowering the doctrinal certainties of the traditional liturgical formulas of the Holy Sacrifice to the level of the vagaries of pulpit interpretation of scriptures.

We need only look at the Motel 6 homilies of the current papacy to see how that works out.

The "mistake" in all this is the assumption that the primary purpose of the scripture readings at Mass is didactic--for the elucidation and instruction of the people. Hence readings and sermons in the vernacular.

Whereas the traditional purpose is primarily liturgical--offering praise to God in His own words (of Scripture). In a language that He understands, with no need to explain their meaning to Him.