GIVEN WHAT CARDINAL WILLEM JACOBUS EIJK, ARCHBISHOP OF UTRECHT, NETERLANDS, SAYS ABOUT HIS DIOCESE BY 2028, TEN YEARS FROM NOW, THAT MOST OF THE CATHOLIC PARISHES IN HIS ARCHDIOCESE WILL BE CLOSED, YOU WOULD THINK THAT EVERY BISHOP IN THE WORLD TO INCLUDE THE CURRENT BISHOP OF ROME WOULD IMPLEMENT WHAT POPE BENEDICT XVI ENUNCIATED TO THE CARDINALS IN 2005 AT THEIR CHRISTMAS GREETINGS BY THE POPE WHICH IS BENEDICT'S AGENDA FOR THE CHURCH

If this isn't the most Christmassy photo of the pope in his papal regalia, I don't know what is! This was after His Holiness, Pope Benedict's famous Christmas speech to the curia in 2005 where he introduced the "hermeneutic of continuity" in interpreting the documents of Vatican II distorted by the "hermeneutic of discontinuity" for way, way too long! 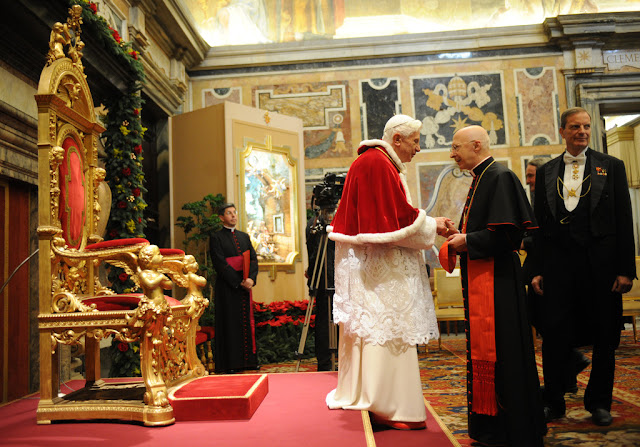 In the post below this one with Lifesite's interview of Cardinal Willem Jacobus Eijk, Archbishop of Utrecht, Netherlands   a very telling answer is given to two questions about the state of the Church in Europe but especially His Eminence's Archdiocese of Utrecht:

Is it true that you are being forced to close many local churches? If so, why?


Yes, many churches have already been closed, and in the next ten years most of the churches will have to be closed. In the past, there were more than 350 [churches]. Now there are about 200 left. I predict that in 2028, the year when I turn 75 and will have to ask the Holy Father to resign, the Archdiocese of Utrecht will number about 20 parishes, with one or two churches in each.


What are the reasons for this?


The small number of faithful who still go to church and, consequently, the small number of volunteers, and the very low income to keep the churches open. There are churches with a capacity of 400-500 people and often even more, where only a few dozen faithful go on Sundays. Many parishes are also drawing on their financial reserves. Ultimately, people abandoning the cause leads to the church closing its doors. We are currently experiencing this decline, but we hope to reappear smaller yet more alive.
We have to keep in mind that the Netherlands and that part of Europe in general, had a very liberal, radical approach to implementing the Second Vatican Council's liberal, progressive, heterodox spirit. They went great guns forward with destroying the Catholic Faith of this part of the world which prior to Vatican II was exceptionally strong as it was in the USA in the 1950's and early '60's.

It doesn't take a rocket scientist or even an academic theologican or a student of history to figure out why the Catholic Church in Europe and now in the USA is entering into such dire straits as the liberal mushy, marshmallow Church of Vatican II cannot and never has been able to cope with or stand up to secularism. It is simply too soft and appeasing of cultural trends and worldly ideologies. Cyncretism with other disordered Christian communions hasn't helped either which has led to a loss of Catholic identity worldwide.

But the major problem with Vatican II is that it is a pastoral council which progressives treat as dogma. It is a council of knee jerk reactions to the modern world of the 1960's and the ideology that man could conquer all and establish the kingdom of God through the Church.

That in a nutshell is what has led to our current crisis of a shrinking Church which many don't think is more faithful but rather more of the same ho hum!

Pope Benedict's Christmas speech to the cardinals of the curia in 2005 is the only solution to the dramatic decline of the Catholic Church.

You can read it in full here:

I think the following is the most important excerpt of that fantastic speech:


The last event of this year on which I wish to reflect here is the celebration of the conclusion of the Second Vatican Council 40 years ago. This memory prompts the question: What has been the result of the Council? Was it well received? What, in the acceptance of the Council, was good and what was inadequate or mistaken? What still remains to be done? No one can deny that in vast areas of the Church the implementation of the Council has been somewhat difficult, even without wishing to apply to what occurred in these years the description that St Basil, the great Doctor of the Church, made of the Church's situation after the Council of Nicea: he compares her situation to a naval battle in the darkness of the storm, saying among other things: "The raucous shouting of those who through disagreement rise up against one another, the incomprehensible chatter, the confused din of uninterrupted clamouring, has now filled almost the whole of the Church, falsifying through excess or failure the right doctrine of the faith..." (De Spiritu Sancto, XXX, 77; PG 32, 213 A; SCh 17 ff., p. 524).

We do not want to apply precisely this dramatic description to the situation of the post-conciliar period, yet something from all that occurred is nevertheless reflected in it. The question arises: Why has the implementation of the Council, in large parts of the Church, thus far been so difficult?

Well, it all depends on the correct interpretation of the Council or - as we would say today - on its proper hermeneutics, the correct key to its interpretation and application. The problems in its implementation arose from the fact that two contrary hermeneutics came face to face and quarrelled with each other. One caused confusion, the other, silently but more and more visibly, bore and is bearing fruit.

On the one hand, there is an interpretation that I would call "a hermeneutic of discontinuity and rupture"; it has frequently availed itself of the sympathies of the mass media, and also one trend of modern theology. On the other, there is the "hermeneutic of reform", of renewal in the continuity of the one subject-Church which the Lord has given to us. She is a subject which increases in time and develops, yet always remaining the same, the one subject of the journeying People of God.

The hermeneutic of discontinuity risks ending in a split between the pre-conciliar Church and the post-conciliar Church. It asserts that the texts of the Council as such do not yet express the true spirit of the Council. It claims that they are the result of compromises in which, to reach unanimity, it was found necessary to keep and reconfirm many old things that are now pointless. However, the true spirit of the Council is not to be found in these compromises but instead in the impulses toward the new that are contained in the texts.

These innovations alone were supposed to represent the true spirit of the Council, and starting from and in conformity with them, it would be possible to move ahead. Precisely because the texts would only imperfectly reflect the true spirit of the Council and its newness, it would be necessary to go courageously beyond the texts and make room for the newness in which the Council's deepest intention would be expressed, even if it were still vague.

In a word: it would be necessary not to follow the texts of the Council but its spirit. In this way, obviously, a vast margin was left open for the question on how this spirit should subsequently be defined and room was consequently made for every whim.

The nature of a Council as such is therefore basically misunderstood. In this way, it is considered as a sort of constituent that eliminates an old constitution and creates a new one. However, the Constituent Assembly needs a mandator and then confirmation by the mandator, in other words, the people the constitution must serve. The Fathers had no such mandate and no one had ever given them one; nor could anyone have given them one because the essential constitution of the Church comes from the Lord and was given to us so that we might attain eternal life and, starting from this perspective, be able to illuminate life in time and time itself.

Through the Sacrament they have received, Bishops are stewards of the Lord's gift. They are "stewards of the mysteries of God" (I Cor 4: 1); as such, they must be found to be "faithful" and "wise" (cf. Lk 12: 41-48). This requires them to administer the Lord's gift in the right way, so that it is not left concealed in some hiding place but bears fruit, and the Lord may end by saying to the administrator: "Since you were dependable in a small matter I will put you in charge of larger affairs" (cf. Mt 25: 14-30; Lk 19: 11-27).
Posted by Fr. Allan J. McDonald at Saturday, December 15, 2018

I recall a time when the Netherlands was considered more Roman than Rome. Yet, the willfully blind members of the hierarchy will view this situation as another Vatican Disaster II "success" story with the new Springtime being just around the corner.

Most of the hierarchy must be insane, because Einstein once defined insanity as "doing the same thing over and over and expecting different results."

Instead of following Pope Benedict's approach to restoring the Liturgy and providing for a more liberal use of the EF, many in the hierarchy and clergy are looking for new gimmicks in an attempt to fill the empty seats. Banal music, bland vestments, and altering the sacred texts and violating the rubrics will lead to even more empty seats. When I attend the EF I see a much larger percentage of young folks there than I do when attending the OF but I guess I am supposed to believe the hierarchy rather than my lying eyes.

European Catholicism is going dawn the tubes and will not stabilize until Christianity will once again be important for its citizens. The decline came for many reasons but the greatest contribution was made by its faithlessness hierarchy. The Church in its documents from the VC-2,l and after the council failed to sufficiently defend the 2000 year old teachings and its Teacher. Moreover, the Church persecuted those, such as the SSPX and other less organized bodies attempting to do that. In addition, the Church functionaries appointed criminals, careerists and sexual perverts in important governing positions and to this day continues to suppress those who would strive for a turn-around in the status quo. Of course, this situation responsible individuals are all well known. Nuf said.