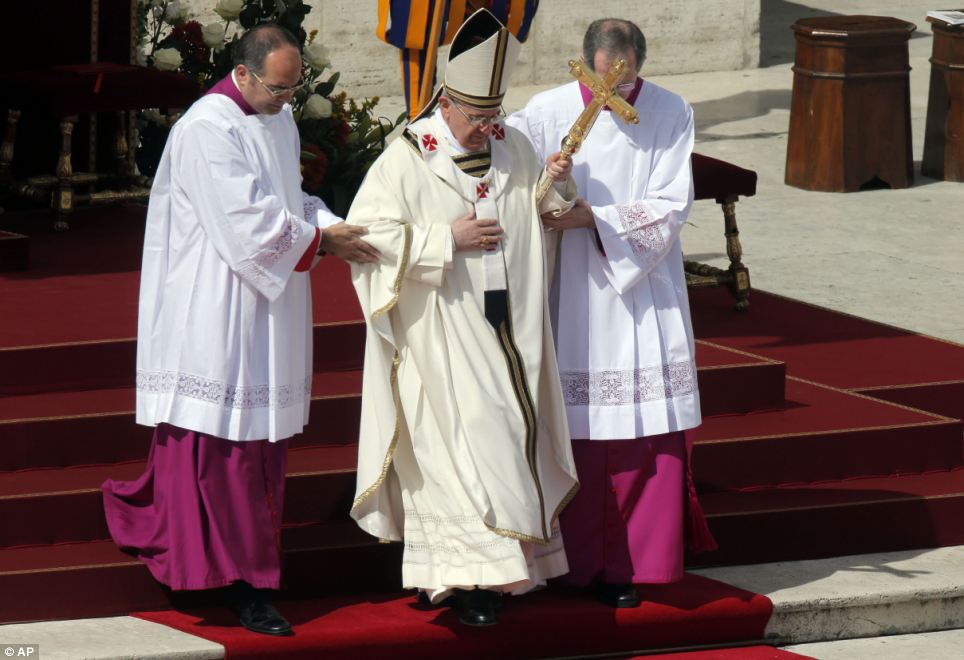 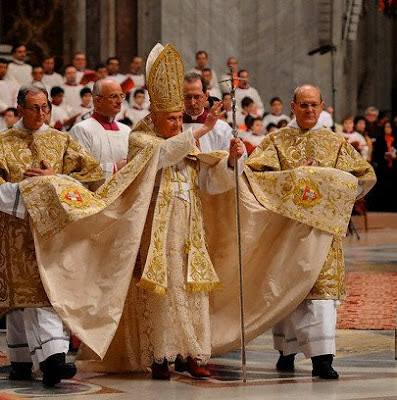 When I went into the seminary in 1976, and yes that’s only 42 years ago, the first thing I noticed about the seminary liturgies, vestments, altar ware and the like, was that it was blah.

I later learned the difference between low Church and high Church styles and those terms being a better, more politically correct description rather than blah or awe.

By low Church analogy, the vestments were unadorned, similar to Pope Francis’ tastes in vestments and 1970's ideologies and theologies.  We were told the stole was the more ancient priestly, I mean, presbyter’s vestment and the chasuble a later concoction thus the stole should be on top of the chasuble not under it if either were worn.

And no decorations or adornments as the vestments themselves were the symbols and it is an aberration to put symbols on symbols, simply anathema in 1970's thinking!

Chalices, I mean cups, were ceramic because Jesus preferred stables to palaces, and patens, no I mean, plates or bowls, certainly not ciborium, should be ceramic or wicker, preferably, with a purificator, I mean, a napkin, underneath the homemade bread of honey, whole wheat and brown sugar because of Sweet Jesus.

Although the texture and consistency of the sweet Jesus' Bread was referred to in the most holy, sacred way possible in the 1970's as, "chewy Jesus!"

I kid you not!

Personally, I am not that enamored with many of the albs and vestments of Pope Benedict and his high Church papacy and liturgies. Some are too gaudy and frilly for my personal tastes.

Pope Francis’ low Church papacy and liturgies are simply blah and uninspiring to me. 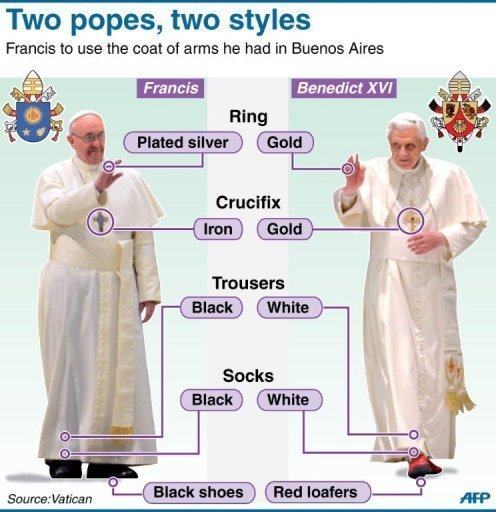 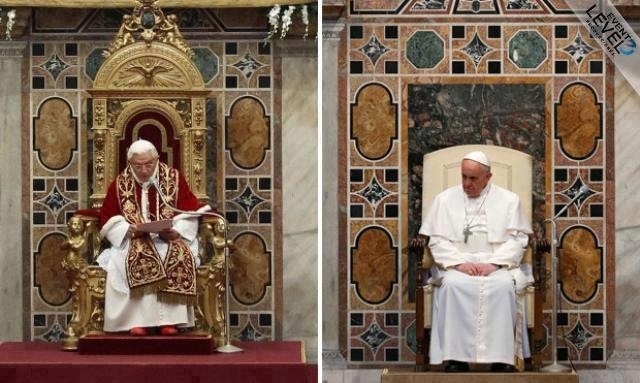 It does appear that the higher platform has returned recently: 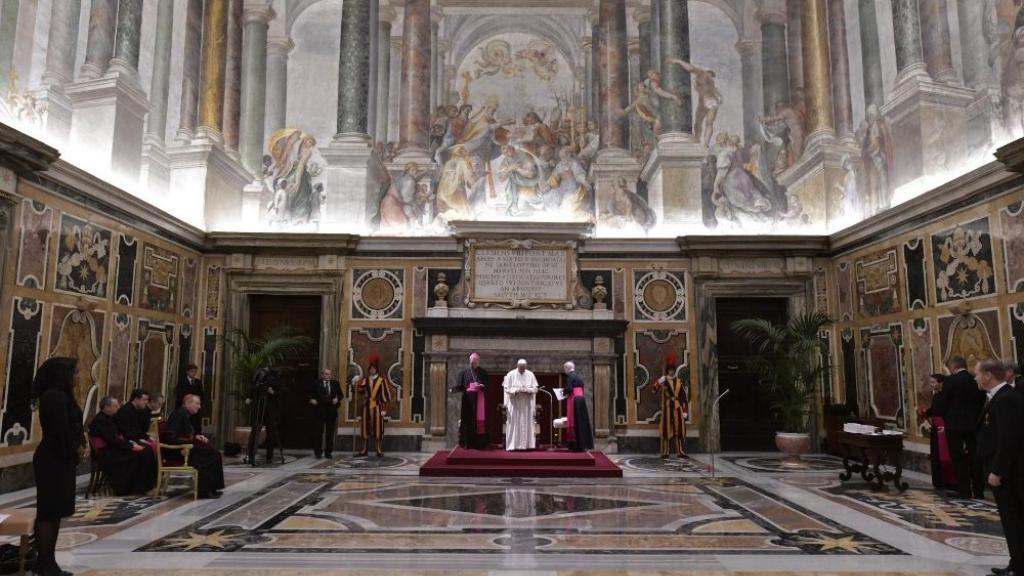 The absurd part of it all is one can pay out the nose for vestments that look like cheap dinner napkins, but one can easily find quality brocade or jacquard vestments that cost far less. It's purely an aesthetic, not a matter of cost.

In my parish after Vatican Disaster II, the pastor tossed out the beautiful vestments assembled over 100 years and bought new burlap ones, so he would appear "humble" or "simple." He was a fraud, because that was not the lifestyle he lived and to think of that money could have been spent on the poor rather than his ego

It is all personal taste and should be evaluated by how respectfully it is executed. Of course Jesus the man was accustomed to the simple life of the beggar, but He gracefully accepted palm branch carpeted parades usually reserved for kings and conquering governors as well as an application of precious oil from a priceless jar. Along with praise the infant and His Family accepted treasures of significant value that may have helped to pay the tax, finance a flight to Egypt and later maybe school for a precocious rabbinical student. We would feel strange and maybe put off if a preist put on a wig and beard with robes to lead a procession. But we can dress our priest, persona Christi, as we would Our King. Not as one of us, but as the One who came to live among us.

The priest may not be expert in this sort of thing and must rely on the advice of parishioners who are bringing the gifts. They may also be off the mark, too. But I think the priest should work to both guide and accept guidance in how this is done.

Is their (sic) a middle Church??????? Yes, “THERE” is. (-:
If you go to F.C. Ziegler Co. you can find nearly anything from simple “contemporary” to more classic. They even show a Fiddleback. The “Heritage Collection”, “Orphrey Banding” , and even a Pope Benedict XVI (although very expensive) would be nice middle ground choices. OR do as Fr. Z does: Go to Italy to pick fabric and trim, then find a personal seamstress...of course this option would require a benefactor, or two, or three...
Blessings

To some degree, the vesture one wears is a matter of personal taste and comfort. When I bought my cassock in Rome, I had the option to choose the fabric (very light wool)and lining (half body) I preferred.

It is, I think, safe to say that, as in architecture, form follows function. A beautiful, heavy damask or brocade fabric may not be the best choice for a sub-tropical climate. A vestment that interferes with the gestures and movements that are part of the liturgy would not be my choice. I've never had the opportunity to wear a true conical chasuble, but I imagine it would be somewhat awkward.

How much "decoration" is enough and how much is too much? I think, again, this is largely determined by the person wearing the garment. To some people, the simplicity of largely unadorned vesture is entirely sufficient. The garment, a chasuble of a particular liturgical color for instance, is itself a powerful symbol that should be allowed to stand on its own without embroidery, braids, tassels, ribbons, or galoons.

Some people find the unadorned chapel at the Monastery of the Holy Spirit in Conyers, Georgia, to be among the most beautiful churches in the southeast. For some, it is barren. I am struck by the exceptional beauty of Japanese ikebana style flower arranging. Some would look at such an arrangement that think that 90% of the plant material was missing.

AI add my name to the school of Leonardo daVinci who said, "Simplicity is the ultimate sophistication."

Father McDonald, I hope that the following is not too far off topic:

By: Ordinariates Established by Anglicanorum Coetibus

I cannot imagine that our heavenly reward is as bland as PF portrays it to be here on Earth. I'm not advocating miles of lace and brocade but, his demeanor, lack of inflection, lack of beauty other than the building itself (excluding the modern Roman parishes) makes one struggle to be inspired and uplifted by how he serves the liturgy.

I don't begrudge Pope Francis his preferences. I don't entirely agree; but overall, he is pretty reverent in his celebration of the Mass, and that is the main thing. On the other hand, I really resent those cheap, small people who use the contrast between the Holy Father's approach, and his predecessor, as a way to score points.

A bit of advice to those people? Your knocks on Pope Benedict don't harm him; but they do damage you.

I think that if you think your "heavenly reward" is going to be definable in terms of how ANYTHING, bland or sumptuous, is portrayed or presented on earth, you are selling God short.

You are right. PF is certainly entitled to his preferences. You are also right in that the styles of HH and, his predecessor, are quite different however, the two are unified by reverence. That aside, and to me, Benedict XVI radiated a joy at liturgy beyond smiling and hand gestures - a joy that seemed tangible and made me want to be part of what was being celebrated, even if remotely and with a time delay. I miss that.

Anonymous @ 6:38: Thank you for your thoughts however, give me a bit more credit than to think that I take such a simplistic view.

Byz, I simply commented on what you said: "I cannot imagine that our heavenly reward is as bland as PF portrays it to be here on Earth.". Eye has not seen, ear has not heard. The sumptuous displays of past pontificates is as dust in comparison to what awaits the Elect.

By wearing vestments from the Vatican treasury Benedict was asserting his humility with regard to his high office, as well as a continuity with his predecessors.

Francis, on the other hand, by deliberately 'dressing down' to the extent of not even wearing choir dress (which he was happy to do as a cardinal) is asserting both his arrogance and his contempt for his predecessors.

His so-called humility is as genuine as that of Uriah Heep in 'David Copperfield'.

After more than five years of Pope Francis not wearing papal regalia, it would look very silly of him to start using it as it just wouldn't fit him or his personality.

However I have contended that for a man like him who disdains papal protocol and the trappings of the "court" it would have indeed shown true humility for him to acquiesce
to papal customs and costumes!

Apart from that I agree with you JN and I wonder how many others now agree with this assessment?

"Francis, on the other hand, by deliberately 'dressing down' to the extent of not even wearing choir dress (which he was happy to do as a cardinal) is asserting both his arrogance and his contempt for his predecessors.

His so-called humility is as genuine as that of Uriah Heep in 'David Copperfield'."

Pretty much this, I havent been in Roman circles in so long, I often forget these problems. But as an Easterner, it is rather embarrassing that amongst his peers, Pope Francis more iften times than not is worst dressed in the room. The playing down of his office pretty much shows his arrogance to not receive what came before him. Why not give to God our best...

Joe Potillor said, "Why not give to God our best..."

That axiom of the Christian East is respected from afar by many in the West and, so often ignored when they offer liturgies in their own churches.

Pope Francis hopefully realizes that he is a temporary occupant of the chair. As such, he should honor his predecessors through continuity and not unduly hobble, through rupture, successors who might wish to do the same.

So, yes, Fr. AJM. I agree with your assessment.

The trappings of the "court" have nothing to do with the papacy.

In fact, they never did.

Regal trappings and the regalia of temporal rulers are as foreign to the Petrine Office as lipstick is to a pig.

We pretended for a long time that jewels, ermine, gold, palaces, etc., were part and parcel of the ministry of Peter. They aren't. Francis has reminded us of this. And some people don't like it.

Anonymous, even you should be aware that popes never assumed the regalia of temporal rulers. We don't need Bergoglio to remind us of this.

Cardinal Ratzinger, as Prefect of the Holy Office, turned up for work wearing a plain black cassock and a beret.

Liturgical vesture is an entirely different matter. Paul VI started the fashion for liturgical minimalism, which was continued by JP II. Benedict demonstrated that it was simply that - a fashion, and in many respects a deplorable one.

Anyone attending Midnight Mass at the London Oratory will see the celebrant and sacred ministers wearing the magnificent Arundel vestments, the gift of a 19th century Duchess of Norfolk.

If you regard them as the trappings of a court you are simply parading your ignorance (yet again).