FEAR OF PUNISHMENT OR LOVE OF GOD? "EITHER/OR?" OR "BOTH/AND?" 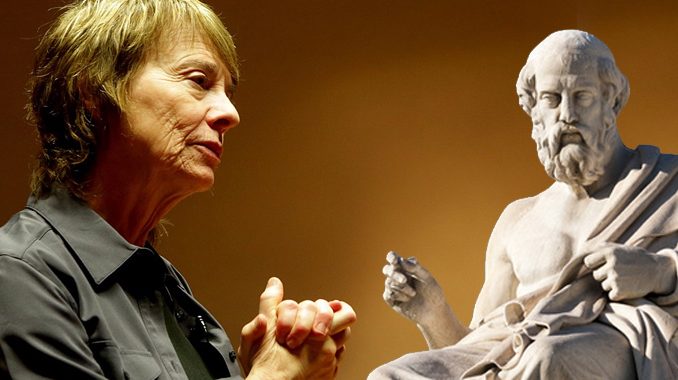 Catholic World Report has an article on the feminist, atheist, gay woman, Camille Paglia who supports pornography and prostitution. But apart from those peccadilloes, she isn't afraid as a progressive to be politically incorrect with progressive, liberal leftists. Thus she endears herself in an odd sort of way to conservative, traditional, orthodox Catholics, a paradox if there ever was one!

Here is one of many money quotes in the article which you can read in full HERE:

Paglia says that the civil rights movements of the 1950s and 1960s took a wrong turn somewhere: “Liberalism of the 1950s and ’60s exalted civil liberties, individualism, and dissident thought and speech…. But today’s liberalism has become grotesquely mechanistic and authoritarian: It’s all about reducing individuals to a group identity, defining that group in permanent victim terms, and denying others their democratic right to challenge that group and its ideology.”

She laments that the movement for radical liberation that began on campuses when she was a college student has resulted in tyrannical rules regulating speech and male-female interactions, even at universities: “How is it possible that today’s academic left has supported rather than protested campus speech codes as well as the grotesque surveillance and overregulation of student life?”

The far left in our Church today and supported in many ways by the current magisterium, is the most dictatorial, virulent form of punishing Catholicism there is, bar none.

It makes God fearing Catholics fearful of offending the ruling class because of their "grotesquely mechanistic and authoritarian" approach to life and rules.

And they use law to enforce fear into those who break their laws. In civil society, espeically the more liberal, socialistic ones today (and my dear Canada has been on the road to this for some time as has the United Kingdom) where it can end you up in prison.

Think of dead priests accused years after their death of sexual abuse where they have no capacity to defend themselves or others to defend them. They are now publicly humiliated. And those who committed so-called crimes 40 or 50 years ago are placed on sex registries in the civil realm and removed from ministry or laicized all without a court procedure to prove guilt or innocence.

Some of these dead priests may have had an accusation of inappropriate touching or emotional attachment only and in only one circumstance when young, and after their death they are lumped with serial rapists convicted in civil court of their crimes and serving lengthy sentences.  This seems just a bit unjust to me if no explanations are given as to the type of abuse and how often or how many victims who came forward 30,40, and 50 or more years after the "assault" happened.

But this brings me to my point. Civil society instills in us the fear of punishment if we break the law whatever it is.

However, mushy, sin enabling progressive Catholicism says we should not fear hell as a motivating force to avoid sin and eternal damnation. We should do right and avoid wrong purely out of love of God and neighbor without fearing either.

Total Depravity(an Augustinian/Calvinist doctrine which gets argued a lot, but is completely Biblical) means that we are depraved regarding any knowledge of God aside from Revelation. Thus, we are incapable of loving God outside of a Christological context and, otherwise, we are dead in our sins and lost to eternal damnation. Holy Scripture his full of very strong warnings regarding this truth. So, a healthy fear of Hell and damnation is important. It should not, however, be the focus of our theology and preaching. Still, there is not nearly enough preaching on the subject of Hell and the wages of sin. Everything is feel good/social action. There are going to be a lot of very surprised liberal theologians when Christ returns.

Paglia is a so ial philosopher. She takes positions, at least initially, until she can think her way off of it. Hence the theoretical value of pornography and prostitution. If she really is clinging to the lie of liberalism of the 50’s and 60’s then she ignores the concepts of “peoples” and the term “Balkanization” that are fundamental to Leninism and its family members communism and progressivism.

The fear of God is not that of a bully, but of failing our beloved Father. Knowing that we fail is a cause for fear in an honest heart.