I LOVE LUCY! SAINT LUCY THAT IS!

Today is the Feast of the Martyr Saint Lucy who is the patroness of Sicily (how bad it that?) and of those with eye diseases and such as well as the patroness of light. She also has the privilege of being named in the Roman Canon. I love Lucy.

When I was in the first grade at Saint Anthony School in Atlanta, the Church had a statue of Saint Lucy with her holding her eyeballs on a paten. However, the statue of St. Lucy had her beautiful eyes in tact in her eye sockets. Thus as a 5 year old first grader, I wasn't sure whose eyes she was holding until my sister explained it to me.

How traumatizing! I wonder if I have a lawsuit against that parish for putting such a macabre statue in the church to haunt and frighten us poor little ones?

So here is a sanitized version and a macabre version. Which one do you prefer? 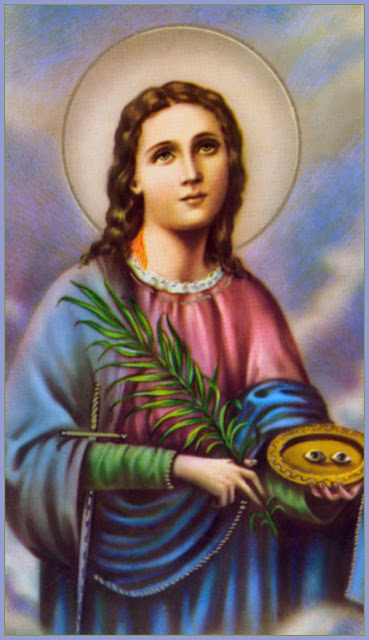 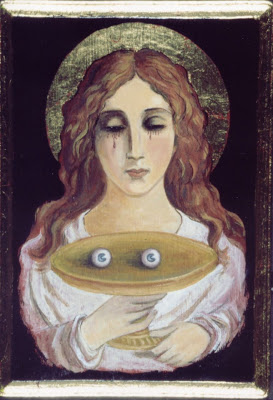 Here's Lucy in more comedic time. Legend has it that Saint Lucy had martyr's red hair too: 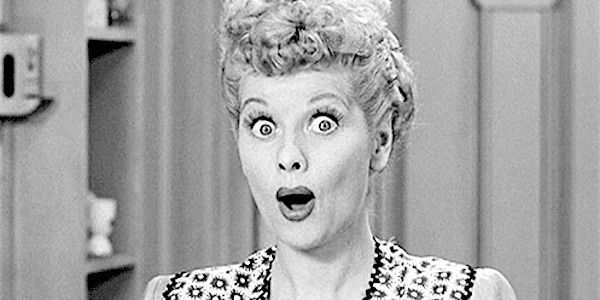 The Church once produced saints. Now full of "shepherds" afraid of being politically incorrect.

When I was a young boy taking piano lessons, one of my favorite songs to play was "Santa Lucia." Jim Nabors shocked viewing audiences when he sang it on The Andy Griffith Show. Most of us were used to him saying "Shazam!"

So many of the Saints stories are so grim that they shock you. Then make you think, is my faith that strong? I hope I don’t have to test it.

St. John Cantius recently acquired a first class relic of St. Lucy. There are photos on the Cantius Facebook page. (Wait a minute for the photos to load with the link)

"Today, a first class relic and wax figure of St. Lucy, after a long and loving restoration, was returned to our collection and enshrined in our church.

St. Lucy is depicted in the moment of her death. Her body is adorned with a silk tunic with gold embroidery. A large first class relic is at her feet. The little saint reclines in a glass casket.

St. Lucy was martyred at Syracuse in the persecution of Diocletian about the year 304 A.D.

"If you were to lift my hand to your idol and so make me offer against my will, I would still be guiltless in the sight of the true God, who judges according to the will and knows all things."—St. Lucy

The 'Legenda Aurea' recounts that she was denounced as a Christian by a rejected suitor. After refusing to apostatize, she was condemned to a brothel, but a mysterious force prevented the persecutors from moving her from the tribunal.

After an unsuccessful attempt had been made to burn St. Lucy to death, her neck was pierced with a dagger. Some legends say that her eyes were removed and later miraculously restored.

The wound to St. Lucy's throat was fatal, yet she never moved. She waited until a priest came and brought the Blessed Sacrament. As soon as she had received Communion she gave up her soul to God, thanking and praising Him of all His goodness.

Special thanks to Broken Art Restoration and our ladies in the St. Martha's Guild for their work in restoring this beautiful piece of Catholic patrimony."