I DON'T KNOW IF THIS IS HIGH, MIDDLE OR LOW CHURCH, BUT WHAT NOSTALGIA AND WARM FUZZIES IT BRINGS TO THE HEART! 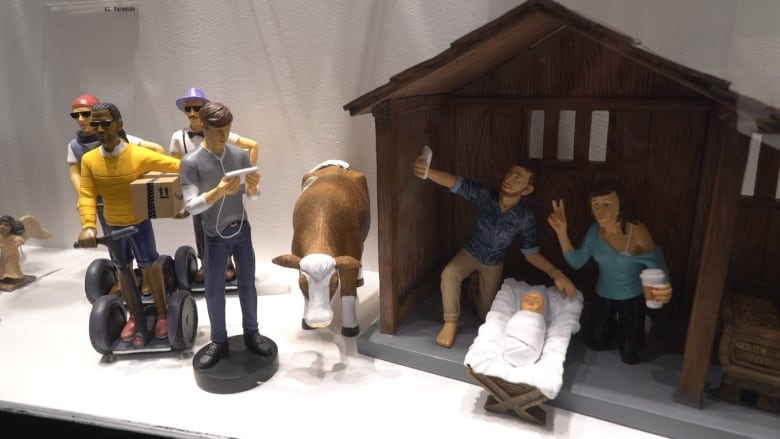 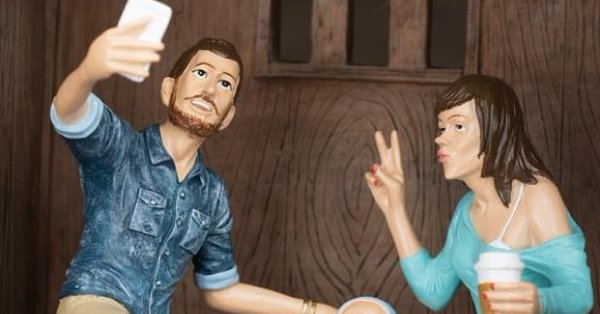 For a true modern update, there shouldn't be a cow. It's a vegan stable now.

a bowl of soy beans instead of a cow to represent soy milk or silk for the Baby Jesus!

I think it's "high" church. Located in one of the states with legalized marijuana.

I don't see enough tattoos on any of the figures...

I agree with Dan.

I hate modernized and culturized manger scenes. Salvation history is linear...it happened once at a particular historical time and place, shaping events from that time forward as God broke into human history in a radical way. Such cultural nonsense is a puny effort to shape these events to suit us or to adapt them to cultural fads and whims. It is also very bad theology.

Every artistic depiction of the birth of Jesus is culturized in some way - why is this one worse theology than any other?

Mary is often depicted in blue. Is that what she wore, or is it a later cultural imposition? Is the manger held up with X shaped legs, four short legs, or is it built into the wall of the shed where the animals were housed?

Was the original a cave or a stable? I've seen both depicted.

I wonder how many of those there at the time saw the haloes around the heads of Jesus, Mary, and Joseph...

And don't even get me started on the Eastern iconographic depictions . . .

God who knows the future chose a particular time, place and religion in which to incarnate Himself by the power of the Holy Spirit of the Blessed Virgin Mary.

Would it be to a Jewish African in Ethiopia today in its most desolate region?

God knew what He was doing in choosing the specific time for the incarnation and eventual Virgin birth. And He knows the perfect time too, for His return, maybe at the most corrupt time of the Church and the world in which it is incarnated????????????????????

Definition of sacrilegious
: committing or characterized by sacrilege : having or showing a lack of proper respect for a sacred person, place, or object

Definition of sacrilegious
: committing or characterized by sacrilege : having or showing a lack of proper respect for a sacred person, place, or object

So every pipeline, roadway, railway, or other construction project that has damaged (shown lack of respect) for the sacred places of the Native American people is, by definition, sacrilegious. Black Mesa, Muscogee Mounds in Mississippi, Red Butte, Eagle Rock, Teztan Biny, Sutter Buttes, etc.

Umm...the American Indians and their pagan gods and rituals are not the issue here. We are talking about the misappropriation of specifically Christian events and realities. If you are a relativist like Kavanaugh, you do not care. I'm sure the famous "art work" of a crucifix in a bottle of urine is fine with him. But, for many of us, blasphemy is a serious issue and needs to be condemned or, at least, pointed out for those who may give a damn.

Umm... So you're the only one who gets to decide what is a sacred space and what is not.

If YOUR sacred images and spaces are mucked with, you'll get your knickers in a knot.

You've made a huge leap there, Kavanaugh. What I said implies no disrespect of other religions or of their sacred sites. But, there IS only one true religion...the one you supposedly represent. The Christian does, indeed, have to say to other religions, "Yes, we know something you do not. We possess the real truth. Our God is the one true God." If you do not believe that, you need to get out of the Priesthood...but, then, what would you do. They are not hiring down at Wal Mart or Universal Tire.

The Catholic Church possesses the fullness of God's revelation, to be sure. Why else would anyone choose to be a Catholic?

Are you telling the good Methodists with whom you worship and among whom you fellowship on Sundays that their church doesn't have the fullness of faith? That their understanding of God is inadequate, incomplete, off the mark?

As to your dissing workers at WalMart and Universal Tire, maybe you should seek employment in those places and discover that the people whose occupations you employ as a put down are, in many cases, good, God-fearing, patriotic Americans.

I'm glad you would stand up for protecting the sacred sites of pagan religions.