ARE WE IN A LITURGICAL MALAISE UNDER POPE FRANCIS? 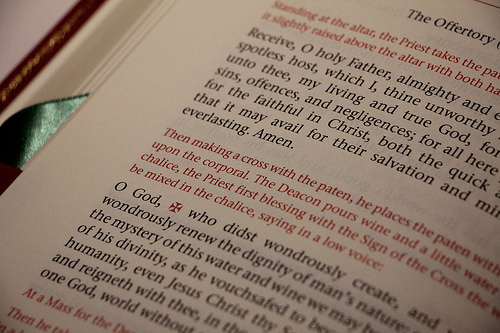 The papacy of Pope Benedict XVI produced quite a bit of "brick by brick" excitement as it concerns the liturgy of the Church. Even the ultra silly Praytell Blog couldn't prevent that excitement on many of its comments until the gestapo cracked down on it.

While Pope Francis hasn't halted the EF Mass or Summorum Pontificum, a fear that many have had and still do, there simply isn't any liturgical enthusiasm generated by his pontificate.

As everyone knows, I love the EF Mass and hope that it will spread more than it has, but that authentic renewal of the Liturgy cannot ignore Vatican II's document on it. Thus the true hope of the Church is what Pope Benedict XVI enunciated, that one day the two forms of the one Roman Rite must coalesce to produce a new Roman Missal organically developed.

I continue to proclaim that the template for this is the Ordinariate's Divine Worship, the Missal.

It has returned to the Ordinary Form so many EF options, like the format of the Missal, the use of the Prayers at the Foot of the Altar, the reorientation of the Introductory Rite to be more like the EF's. It has recovered many EF rubrics as it concerns the Canon of the Mass. It allows for the three-fold Dominus Non Sum Dignus.

It makes possible ad orientem and kneeling for Holy Communion. The gradual is directly in the Missal as it is in the EF Missal along with all three antiphons, the Introit, the offertory antiphon (missing in the current OF Missal) and the Communion antiphon.

Its calendar has also recovered many elements of the EF Roman Calendar.

But sadly there has been no movement on the Ordinary Form for the majority of Catholics to have what the Ordinariate Missal allows now. That is a scandal and shows the malaise we are currently experiencing as it concerns the organic development of the Ordinary Form Missal.

How many of you have witnessed more EF Masses in your area and more solemn-EF-like Ordinary Form Masses? Not many I bet!
Posted by Fr. Allan J. McDonald at Friday, December 28, 2018

The Entrance and Communion antiphons in the Novus Ordo are only printed in the Missal so that they can be spoken aloud where they are not sung. They are not supposed to be set to music, and many of the Communions are new creations which have no chant setting in any case.

In a sung Mass the preferred options for both are found in the Graduale Romanum (1974). Also useful is the Solesmes Gregorian Missal which covers Sundays and major feasts, and also has the rest of the Mass in Latin and the vernacular. Both include the Offertory chant. The Responsorial Psalm and so-called Gospel Acclamation are part of the Lectionary and are intended to be sung. However, they can be replaced by the Gradual and Alleluia from the Graduale, and when the Novus Ordo is sung in Latin they usually are.

The idea of 'coalescing' what are two quite separate rites is really a non-starter. The Novus Ordo is a protean beast with a plethora of options; the classic Roman Rite is emphatically not. No devotee of the old rite will accept the NO's calendar and Lectionary. The Ordinariate Missal fudges the issue; if elements of the BCP were to be introduced, surely the most important would be the Epistle and Gospel which Cranmer took from the Sarum Use. But no - they had to sign up to the 1970 Lectionary.

Even the insertion of more Prefaces and more recent saints into the old Rite, though hardly contentious, won't happen - for the simple reason that there is no desire in Rome to do this. The old Rite can't be shown to be capable of further development; it must remain in its 1962 aspic, a museum piece which only appeals to 'rigid' neo-Pelagians.

TLM Mass attendance is going up. NO is decreasing. Wellcome to the future,

John, the Introit in the Ordinariate’s Missal is formated as in the EF Missal with anthiphon, verse, Glory be and antiphonal repeated. You say the simpler Introit in the regular OF missal should not be chanted. I know of no rubric that states this and in fact the Vatican choir chants it.

In the 1962 Missal the Introit is printed (as are the Gradual, Alleluia/Tract, Offertory and Communio) since the celebrant has to read these even when they are sung. This requirement was removed in 1965.

If you look at Christmas Midnight Mass you find the traditional antiphon 'Dominus dixit ad me' without any verses, but also an alternative: 'Gaudeamus omnes in Domino, quia Salvator noster natus est in mundo ...'. This latter has no chant assigned to it in the Graduale. Turning to the Communio, we have in the Missal 'Verbum caro factum est, et vidimus gloriam eius'. Again this is a new interpolation with no chant and no verses. If the Communio is to be sung, the Graduale has the traditional chant 'In splendoribus sanctorum', to which verses may be added ad libitum.

If you look at the Praenotanda for the 1974 Graduale you will find that when the Introit is sung there are more options than there were previously. (One verse or more, the doxology optional, even the antiphon on its own). I doubt that many choir directors are aware of this, since the Praenotanda like the rest of the Graduale is in Latin. The Vatican choir uses an option from the Graduale, not a setting of the Missal text, although in most cases the Missal text corresponds to the antiphon in the Graduale.

It was the CDW which clarified, some years ago, that the Introits and Communios in the Missal were for a spoken, not a sung Mass, to be said by the people together, or even the priest on his own.

I hope this sheds some light on the matter!

Also, this ties in with the original thread. The NO incorporates the idea of 'graduated solemnity', as opposed to the missa lecta, missa cantata and missa solemnis of the older rite. It follows that the most solemn celebration of the Novus Ordo would include these elements:

1. Everything that can be sung, should be sung.
2. The sung Propers are from the 1974 Graduale Romanum.
3. The Mass would be in Latin, the only authentic text of the Novus Ordo. All other texts are translations of varying accuracy.
4. Incense and lights are used. Other ceremonies not specified in the rubrics are allowed provided they reflect the Roman liturgical tradition.
5. Either orientation is permissible, although ad apsidem is preferred as it better reflects the Church's constant practice.

Not everyone would aspire to this - for example the use of the vernacular for certain parts of the Mass would not greatly impair the solemnity. But it is something to aim for, and the NO Masses which I attend tick most of the boxes.

It also helps if practices of recent and dubious provenance, and which are in no way integral to the rite, be discontinued. You know what I am referring to.

We are in a liturgical malaise because for the typical Jesuit, Liturgy is not their thing.

The Bugnini burger should be suppressed and the reform started over. My mother converted to Catholicism in 1951, and for her, raised a Methodist, what attracted her most to Catholicism was the beauty and solemnity of the High Mass. When the changes came in the mid-1960s she mentioned that the resulting hodge-podge would never have moved her to join the Catholic Church, it was too protestant. The typical OF is a snorer, devoid of beauty. Now that I have recovered from surgery, it will be back to the EF tomorrow morning!!! Deo Gratias!

PS; lest you think me unfair, I gave the OF about 35 years of service as a cantor and choir member. But I have wearied of Brand X

There were indeed those who were attracted to the Catholic Church by the beauty of its liturgy and music. It is a powerful tool for evangelization.

At the same time there were those like Evelyn Waugh who were not so attracted. What convinced him was the ex opere operato of a simple Low Mass.

Newman's conversion was also intellectual rather than aesthetic. Yet the Oratorians are renowned for their solemn liturgies and exquisite music.

I wonder if Evelyn Waugh would have been attracted to a Novus Ordo low Mass.

Yes, the Oratorians are tops when it comes to liturgy. We are seeing more of them popping up in the US.

Waugh followed the Council's proceedings with dismay, and although he did not live to see the Novus Ordo per se, by 1965 he was able to say, regarding his 'Sword of Honour' trilogy, that he had unknowingly written the obituary of the English Catholic Church: 'All the rites and most of the opinions are now obsolete.'

The vernacular Mass, first introduced in late 1964, had 'The Lord be with you. And with you.' 'And toodle-oo' said Waugh, before walking out.

I suspected as much. Liturgical "reform" was a big, frigging lie. In my opinion, with Catholic parishes in the US packed to overflowing on Sundays prior to Vatican Disaster II, there was no need for liturgical reform. But left-wing ideologues who hated the Church were determined to undermine the Church via "reform" and they succeeded beyond their wildest dreams. Catholic congregations in most cities are shrinking and many parishes are closing. The "Springtime" they promised has turned into a cold, desolate winter.

Today I attended the EF at a parish in a close in Chicago suburb, where 50% of the congregation are Spanish speaking and the other 50% are English speaking. We all participated at Mass in the lingua franca of our Church. I noticed that I, in my 60s, was one of the elders in the congregation. The vast majority were in their 20s, 30s, and 40s, with lots of babies and young children. But prevaricating "progressives" will repeatedly say that what I experienced is not possible, but they never show up to see for themselves because it would shatter their worldview.

After experiencing this today, I am convinced, more than ever, that the EF will ultimately prevail over the ersatz Rite most Catholics are forced to endure because of selfish, self-centered priests and bishops who say the Mass that is convenient and easy for them. Priests like Father McDonald deserve our continued praise and support because at least he recognizes that what we are being served, is not necessarily what we need.