THREE YEARS AGO TODAY, FEBRUARY 11, 2013, FEAST OF OUR LADY OF LOURDES

However, in today’s world, subject to so many rapid changes and shaken by questions of deep relevance for the life of faith, in order to govern the barque of Saint Peter and proclaim the Gospel, both strength of mind and body are necessary, strength which in the last few months, has deteriorated in me to the extent that I have had to recognize my incapacity to adequately fulfill the ministry entrusted to me. For this reason, and well aware of the seriousness of this act, with full freedom I declare that I renounce the ministry of Bishop of Rome, Successor of Saint Peter, entrusted to me by the Cardinals on 19 April 2005, in such a way, that as from 28 February 2013, at 20:00 hours, the See of Rome, the See of Saint Peter, will be vacant and a Conclave to elect the new Supreme Pontiff will have to be convoked by those whose competence it is.


Later that night on the Feast of Our Lady of Lourdes, this happened: 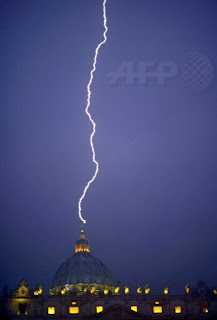 I'm still crying. The wolves won. For now - we're down to the last defence: the promise of Our Lord Himself. Everything else is gone. Rome has been sacked.

I was, and am, heartbroken over this episode, cut loose from some moorings, too, I have to say; for the second year in a row my Lenten reading will be from Moscow. But for now, I wait to see what Patriarch KIRILL and Pope FRANCIS have to say.

A sad day for Holy Mother the Church and Faithful Catholics but a wonderful day for fake catholics and apostates and their media allies.

I agree with Anonymous. The wolves won.

While I do not believe the wolves have won, I do admit that the fox has found his way back into in the hen house, and by fox I do not mean Pope Francis. I mean the ideologues of the regressive left who have been (temporarily) resuscitated. I think the Holy Spirit, however, has managed to send in His beagles to flush out the foxes (heretics exposed!). We've learned from the Synod the identities of those who are with us (orthodox prelates) and those who are against (Kasperites) the Church, and that—as tough as it has been and continues to be to witness all the conniving going on—gives me hope that the Judases are on the way out.